John Barrow: stories of the Universe 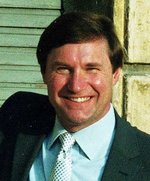 You can read a more detailed account of John's life and work from the Faculty of Mathematics at the University of Cambridge.