Outer space: The answer to runnin' in the wind 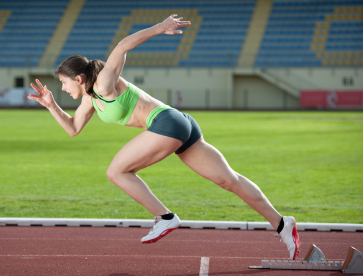 Runners and cyclists can tolerate heat and cold but the thing they dislike most is wind. They know it produces slower lap times on loop courses. Can we show them why?

If you run through the air at speed

and your body presents a cross-sectional area

. This cylinder contains a mass of air,

is the density of air. The magnitude

of the drag force you will feel is

The rate of energy use, or power

, needed to overcome the air’s resistance is equal to

In practice, the quantity

depends on the aerodynamic quality of what you are wearing and your degree of streamlining as well as your geometrical area. We split it up as two parts

is the geometrical cross-section and

is a drag factor, which takes shape and clothing texture into account, and typically is

So the power needed to run at speed

through still air is

A top class sprinter with a mass of

, moving through air of density

will use about 3% of their energy overcoming still air resistance.

What if there is a wind blowing? If the wind speed is

the drag force to be overcome will be proportional to

is a tailwind and

if it is a headwind. Notice there is an asymmetry in this formula because the dependence on the speed is a square. If you ran at

with a following wind of

where if there is a headwind of

and the perpendicular crosswind

. The magnitude of the resultant velocity is therefore

to your direction of motion, where

.) The magnitude of the drag force experienced is proportional to its square

The power needed to run at speed

through a crosswind is therefore proportional to the product of the running speed and the drag force, that is

is the same as it is in your direction of motion, although it might well be slightly bigger. 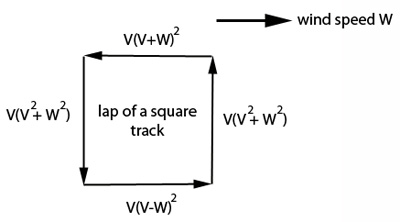 The asymmetry noted above enables us to understand why it is always harder running laps in the wind than in windless conditions: you never gain from the tailwind what you lose into the headwind.

For simplicity, suppose you run around the four sides of a square track at speed

but on straight two (into the headwind) it is proportional to

while on the fourth straight it is proportional to

because the wind is following. If we add these four together we get

You see that the smallest running power of

is required when there is no wind (

): the power is always bigger with any non-zero wind speed.

The best racing strategy for runners in races that cover many laps is also clear. When you are running into the wind you should try to shelter behind other runners to avoid feeling the full force of the wind. Most runners appreciate this slip-streaming trick but they often don’t recognise the other part of the optimal strategy. When the wind is behind you, move out to make sure there is no one directly behind you shielding you from feeling the full benefit of the tailwind. This won’t make running in the wind easier for you than when the air is still but it will make it easier than it is for your rivals.

Outer space: The answer to runnin' in the wind

I can follow why a head-wind should slow down a cyclist (and not be of great benefit for an out and back course)...
but
The most energy-sapping type of wind is not a head-wind, but a side-wind (i.e. one that blows from the side).
Clearly, the vector sum of the wind and velocity of the cyclist give a retarding force that acts at perhaps
45 degrees, furthermore on an out and back course it has a retarding effect in both directions.

Okay, so it all is a little complicated. Here's my question: Does a 100 pound person or a 150 pound person have an easier time with a headwind? I ran a race yesterday and my pace time was affected a lot by the headwind, but I was wondering if the bigger people were having an easier or more difficult time. Thanks! Rochelle