Henry Wilton is one of this year's winners of a Whitehead Prize, which is awarded annually by the London Mathematical Society to mathematicians who are in an early stage of their career. Wilton works at the University of Cambridge, the home of Plus, so we took the opportunity to talk to him to find out about his work.

"I feel really honoured to be on a list that includes lots of my mathematical heroes and heroines," Wlton told us. "It's a prize with quite a long history — 41 years is exactly my age, so the prize has been around exactly as long as me. And among the [previous prize winners] are some of the mathematicians I have admired most in my life."

From geometry to algebra and back 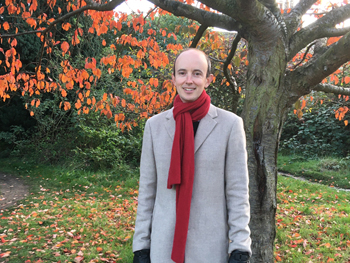 Wilton's area of research illustrates the curious paths mathematical research can take. For a long time people have been interested in the study of symmetry. Symmetry is immunity to change: if you rotate a square through multiples of 90 degrees around its central point. its appearance remains unchanged, as it does if you reflect it in vertical, horizontal or diagonal lines that run through the central point. A circle can be rotated through any angle you like and reflected in any line that runs through its centre point without changing its appearance. Unlike a square, which has a total of eight symmetries, a circle has infinitely many symmetries.

But symmetries don't just come up when you are dealing with geometric objects. The equation

remains the same whether you substitute in

, so we can detect a notion of symmetry here too (find out more in this Plus article). Even when it comes to real-world problems you can often exploit symmetry to find solutions. For example, if in a school there are two teachers who can both teach the same subjects and have the same availability, then you can swap them without disturbing your time-table. Studying the symmetries of an object or problem is often a useful way of understanding it.

"The study of symmetry is called group theory," explains Wilton. "That's a very old topic that goes back about 200 years. But about a hundred years ago there was a shift in the way people thought about groups. Lots of mathematicians stopped thinking about [groups] as symmetries of actual objects and started working with them in a purely algebraic way."

. When you follow one symmetry by another, the result is also a symmetry. For example, doing a 90 degree rotation in the same direction twice amounts to doing a rotation through 180 degrees. Thus, the symmetries of the square tell you how any two of your eight letters combine to give you a third — you can then forget about the square altogether and just think about your group of symmetries as a collection of abstract objects denoted by letters that combine in pairs in a specific way. (For a precise definition of a group see this Plus article.)

"[This algebraic way of thinking about groups] is the topic of combinatorial group theory," explains Wilton. "This dominated group theory for much of the twentieth century. Then there was some amazing work in the 1980s by Mikhael Gromov and William Thurston, and others, who remembered that a hundred years ago people were thinking of group theory as studying the symmetry of things — [in particular] geometric objects that you can visualise." This area is called geometric group theory.

Wilton works on the confluence of combinatorial and geometric group theory. "[They are] the same field really, but viewed from different perspectives."

Wilton got into this area of research through pure luck, as he puts it, after completing his undergraduate degree at the University of Cambridge. "All I knew was that I really wanted to do [a PhD in] geometry, but there weren't many people working in geometry in Cambridge at the time," he recalls. Luckily, though, there was someone at Imperial College, London, who did, albeit from a group theoretic perspective. That person was Martin Bridson, and he became Wilton's PhD supervisor and guide into the world of geometric group theory.

This applet rotates a regular 12-gon (use the slider to rotate it). You can see that rotations through a 12th of a circle leave the shape unchanged, so they are symmetries of the 12-gon.

One of Wilton's favourite results, which he proved together with Bridson and published in 2015, involves infinite groups of symmetries, like the one of the circle mentioned above. One way of tackling such infinite beasts, which can be a lot more complex than the symmetry group of a circle, is to see if you can break them up into finite chunks in some way. This would be incredibly useful because finite groups a very well understood - in what is perhaps the biggest effort in collective mathematics, the classification of finite simple groups has provided an atlas listing all possible components a finite group can be made up of (find out more here).

This doesn't mean that given a particular infinite group you can never tell if it's got a finite slice — it may be that there's an algorithm for working out the answer for that particular group. But it does mean that there isn't a general algorithm that will work for every infinite group that you care to throw at it. (For those who know about these things, the question of whether there's a finite slice is undecidable in the sense of Alan Turing's halting problem.) Bad news theorems of this nature aren't actually that bad: they give deep insight into the complexity of the objects you are dealing with.

Wilton thinks his area of research is a great field for young researchers to go into. "It's both a very old and a very young area. It studies things that should have made sense to people a hundred years ago," he says. "But because it went through this long hiatus of looking at things from different points of view it's still a very young area in terms of the [techniques being used]. So it's not an incredibly theory-heavy area and a young person can still get to the coalface and start answering difficult questions quite quickly."