Stubborn equations and the study of symmetry 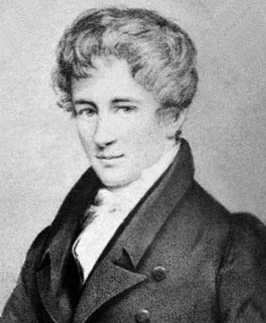 In 1824 a young Norwegian mathematician called Nils Henrik Abel proved a shocking result involving a certain type of equation. A little later the French prodigy Évariste Galois provided deep insight into why that result was true — and in the process founded the mathematical study of symmetry. Neither of the two lived long to enjoy the fruits of their work. Abel died in 1829, at the age of 26, from tuberculosis and in poverty. Galois died in 1832, from wounds he received in a duel allegedly fought over a woman. He was only twenty years old.

So what was their work about? And what do equations have to do with symmetry?

One of the most famous mathematical formulas is the one that gives you the solution to a quadratic equation. If the equation is

then the formula tells you that the solutions are

are, this formula hands you the solution on a plate. It’s very handy.

There is a similar formula, though a lot more complicated (see here), which gives you a general solution to a cubic equation of the form

Even more complicated formulas will give you a general solution to the quartic equation, which has the form

The formulas that give the solutions to the quadratic, cubic and quartic may look complicated, but they only involve a limited number of operations: addition, subtraction, multiplication and division, as well as taking square roots, cube roots, or fourth roots.

or polynomial equations involving even higher powers of 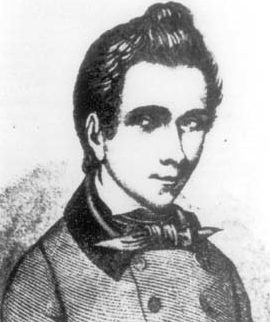 Évariste Galois, drawn from memory by his brother in 1848, sixteen years after his death.

What we would like is a formula that gives a general solution and only involves addition, subtraction, multiplication and division, and taking roots. If an equation has such a formula giving a general solution, then we say it is solvable by radicals.

The result proved by Abel in 1824 is that there isn't such a solution: the general quintic cannot be solved by radicals. This doesn't mean that you can never solve a quintic. For example, the polynomial

But it does mean that there is not a nice, neat formula that gives the solution to the quintic in its most general form.

Abel proved the result, but it was Galois who a few years later provided real insight into why the quintic isn't solvable by radicals. Galois is often credited with laying the foundation of group theory, the mathematical study of symmetry, with his work on equations. We usually think of symmetry as a visual thing: a picture, or a pattern might be symmetric. But what do symmetries have to do with equations? The answer is subtle, but beautiful.

We can detect a hint of symmetry when we think about quadratic equations. As an example, the quadratic 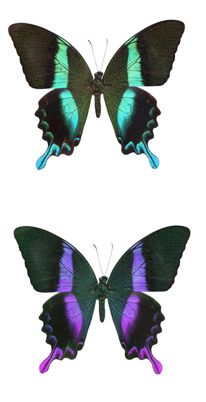 To understand this, let’s look at the numbers involved. The coefficients of our equation

are 1 and -2: these are nice and straight-forward rational numbers. The solutions, however, are irrational numbers: try as you might, you cannot write

as fractions. Most quadratic equations have solutions that are irrational numbers, so clearly when we think about them the collection of rational numbers is not enough.

So let’s extend it. Instead of looking only at the set of rational numbers (for which we write

), let’s form a new set of numbers, which we will call

. It consists of all numbers that can be written in the form

) and also the two solutions

is nicely self-contained: you can add, subtract, multiply or divide any two numbers in

and the result will also be in

is what mathematicians call a field. The self-contained nature under the operations of arithmetic is one of the properties of a field. It turns out that

. Doing this to all numbers in the field

amounts to swapping a number

Let’s represent this swapping operation by a function

to all numbers in the field

does not really make a difference to

and its structure. It does not make any difference to the rational numbers in the field at all, as

It does change the irrational numbers in the field, but once we have applied

to all of them, the overall collection of numbers is still exactly the same: it’s still

. (This is because if

is a member of

What is more, applying

to all members of

to get a third number

gives as the result

In this sense, the function

It does not make a difference to

To give it its proper name, the function

-automorphism of the field

: it is a bijective function from

to itself, which leaves members of

unchanged and preserves the structure of the arithmetic operations.

Are there any other

? The answer is yes, there is one more, although it’s a boring one. It’s leaving every member of

unchanged. This is represented by the identity function

So the collection of

(that is, the collection of symmetries arising from

) consist only of the functions

The collection of symmetries of any object, whether it’s a shape like a square or an equation, forms a self-contained system called a group. (A group is not dissimilar, though simpler, than a field.) The system is self-contained because when you follow one symmetry by another symmetry, the result is also a symmetry. In our example, following the symmetry (

by itself gets you back to where you started, so it amounts to performing the identity symmetry:

The group of symmetries that comes from our equation, consisting of the two

, is called the Galois group of the equation

Why you can't solve the general quintic

We can do all of this for any other polynomial equation

, for example for a quintic of the form

, to form the smallest field (call it

and all the solutions to the equation

This is called the splitting field of

Just as we did for the quadratic, you can look at the symmetries of this splitting field. These are

, which leave all the members of

unchanged, swap around the irrational members of

and preserve the structure of addition, subtraction, multiplication and division. These form the Galois group of the equation 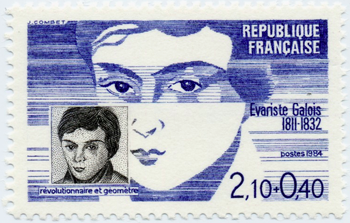 What Galois was able to show is that whether or not an equation is solvable by radicals depends on the structure of its Galois group. Sometimes the Galois group breaks up into smaller components that correspond to taking square roots, or cube roots, or

th roots for some larger

If that is the case, then the equation is solvable by radicals. If, however, it doesn't break up into smaller components in the right way, if you can't disentangle the symmetries from each other, then you can't find a general solution that involves only addition, subtraction, multiplication, division and taking roots — in that case you can't solve the equation by radicals. It's possible to show that there are quintic equations that don't break up in the right way. These therefore aren't solvable by radicals. And this means that we can't find a general solution to the quintic as we have for the quadratic. The same is true for polynomial equations that involve higher powers of $x$ too: there isn't a general formula that solves them by radicals. The study of the solutions of equations using group theory is known as Galois theory, after its inventor.

You can read a more detailed, but still accessible, account of this on our sister site NRICH.

The article now forms part of our coverage of a major research programme on group theory held at the Isaac Newton Institute for Mathematical Sciences (INI) in Cambridge. The INI is an international research centre and our neighbour here on the University of Cambridge's maths campus. It attracts leading mathematical scientists from all over the world, and is open to all. Visit www.newton.ac.uk to find out more.

Great article! Just a small correction:
In the second last line in the last paragraph of the section " Switching Solutions", it should read:
" it is a bijective function from $\mathbb {Q}(\sqrt{2})$ to itself..."

Thanks very much for pointing

Thanks very much for pointing out the mistake, we have corrected it.