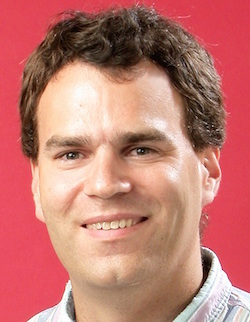 David Rideout, a physicist at the University of California, San Diego, is working on a family tree like no other – one spanning the genealogy of the universe. While the recent birth of Earth's seven-billionth baby raised population alarms, the human family tree is only the tiniest sapling compared to Rideout’s effort, which has 10240 "leaves" – one for every point in spacetime – and grows with every passing moment. His hope is that this cosmic tree will help physicists bridge the gap between Einstein's laws of gravity (which describe how huge masses warp spacetime) and the strange predictions of quantum theory (which governs the realm of the very small).

When physicists try to calculate what happens in regimes where huge masses are confined to small regions, such as the points of infinite density – singularities – within black holes, their equations of gravity run into a snag. "Inside a black hole, the fabric of spacetime seems to end. The theory is calling for help!" says Rafael Sorkin, a physicist at Syracuse University, New York. Quantum theory is not immune either, he adds: "The bare electric charge of the electron is very badly infinite" in the quantum equations of electromagnetic force, though of course electrons do not carry infinite charge in reality. One possible way round these problems is to treat spacetime as a network of discrete chunks, just 10-35 metres across, rather than a continuous fabric. In this case, spacetime would never shrink to infinitely small volumes.

Discreteness is not the whole story, though. If it were, says Rideout, "Spacetime would be like a pile of dust." To cast a complete description of the universe, physicists need something more to mathematically connect the points together, and Rideout thinks that "something" just might be causality. He hopes that combining causal structure with underlying discreteness – with the help of an FQXi grant for over $110,000 – will fill in the remaining gaps and yield complete information about space and time all the way back to the Big Bang.

The Genealogy of Spacetime

"It may lead to another paradigm shift of the way we conceptualize the world around us."
– David Rideout on quantum gravity and causal set theory

The project goes like this: Start with a list of every point in space and time, all the way back to the Big Bang. Then add information about the relationship between every pair of points in the set. Luckily, there is only one thing you need to know about the relationship between those two points: Can A affect B? Thanks to Einstein's theory of special relativity, we know that nothing can travel faster than the speed of light. This means that some pairs of points in spacetime will be forever disconnected. So, if the two points are suitably distant in time and space, the answer will be no, one could not have affected the other. If they are close enough, the answer is yes. A causal set is a roster of those "no" and "yes" answers for every pair of points in space and time.

Causal sets might also help unite the disparate views of the nature of time expressed in quantum theory and general relativity – which have thus far made it hard to gel the two into a unified theory of quantum gravity. In quantum mechanics, a universal clock drives the evolution of quantum systems. While developing relativity, on the other hand, Einstein showed that our idea of simultaneity – that two distant events can occur "at the same time" – is fundamentally flawed. Many gravitational theorists have therefore come to view the universe as a static block of spacetime, with no global "now," only a series of causally connected happenings. (See "The Crystallizing Universe" for more on the block universe.)

Rideout, however, believes that causal sets offer a view of time as a process that is occurring – as in quantum theory – with the future being formed as we live our lives and make decisions: "The growth dynamics of causal sets expresses the progression of time as a continual process of becoming, like the unfolding of a flower or the growth of a tree," he says.

The Universe? There’s an App For That

This growing tree, which currently has 10240 leaves, might seem like an impossibly daunting subject for study, however. "The number of patterns of ancestry that are possible is enormous," says Sorkin, who first proposed using causal sets to probe quantum gravity, in 1987. That means that probing the mechanics of causal sets requires serious computing power. Fortunately, Rideout is distinguished by his facility with the sort of numerical computation that is done on high-performance computers.

Rideout is a contributor to a computing framework called Cactus, which he believes changes the paradigm for writing software: "Each scientist writes their own module, and then the framework takes care of making sure the modules work together." Though Cactus emerged more than a decade ago as a tool for numerical relativity, scientists now use it to study everything from quantum gravity to ocean coasts. "David's been very involved as a co-developer" of Cactus' open-source modules, says Gabrielle Allen, an associate professor of computer science at Louisiana State University, Baton Rouge. 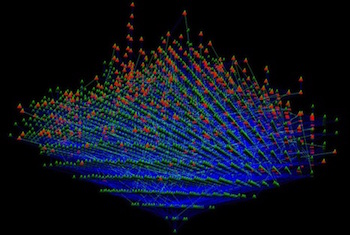 The biggest tree of all – The causal relationships between different spacetime points, just a fraction of a second after the Big Bang. (Image David Rideout, UCSD)

Rideout's computational approach also generates eye-popping images, such as the one shown on the right, which recently garnered third prize in the University of California, San Diego's Art of Science competition. Rideout credits his artistically-inclined eight-year-old daughter Eleanor with selecting the image and its colours.

When Rideout was his daughter's age, he recalls, his interest in science was inspired by the prospect of far-flung exploration described in Star Trek and other science fiction. Today, he hopes that his work with causal sets will prove that we do not have to travel through space to advance our understanding of the universe. "If we are on the right track, then the resulting theory of quantum gravity may have far-reaching consequences way beyond anything I may have imagined as a child," Rideout says. "It may lead to another paradigm shift of the way we conceptualise the world around us."

This article first appeared on the FQXi community website. FQXi are our partners in our Stuff happens: the physics of events project, within which we explored the nature of time. Click here to find out about the different views of time in cosmology.