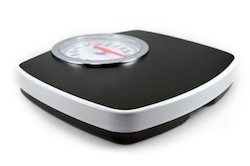 Struggling with your new year resolution to lose weight? Perhaps the weight isn’t going down quite as fast as you’d hoped? Then I have good news for you, and I have bad news for you.

The good news is that you probably aren’t doing anything wrong, instead the standard rule of thumb that predicts weight loss is wrong. This rule, known as the 3500 kilocalorie per pound rule, is used almost everywhere, including the NHS here in the UK, countless weight loss programmes around the world and the National Institute of Health (NIH) in the USA. The rule predicts that weight loss is roughly linear – as long as you continue to cut 500 kilocalories a day from your diet (say, eating 2000 kcal a day where before you consumed 2500 a day), you’ll carry on losing around half a kilogram a week. It's immediately obvious that there's a problem – if this linear rule was true it would suggest you'd eventually weigh zero kilograms! But even if we only use this rule for predicting weight loss over a limited period of time it still isn't helpful. "The standard rule of thumb is completely wrong," said Kevin Hall at the American Association for the Advancement of Science meeting in Vancouver last week. "It presents too rosy a picture and overestimates weight loss as it doesn’t account for the metabolic changes that take place when people lose weight."

Fundamentally you will lose weight if you consume less calories than you burn, but the rate at which you burn calories depends on both your metabolism and your body composition. Cutting calories out of your diet slows your metabolism down; you lose weight quickly at first but this rate of loss slows down until your weight eventually plateaus. And the rate at which you lose or gain weight also depends on the ratio of fat to lean tissues in your body: people with a greater proportion of body fat will lose it more quickly, but equally they’ll gain body fat more quickly too. Taking both these aspects into account, Hall and his colleague Carson Chow, both from the NIH, have developed a more realistic model of weight loss. In their model, cutting a constant amount of calories from your diet will result in an exponential decrease in your weight, rather than the linear decrease predicted by the old rule. 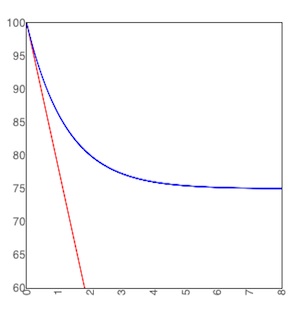 For example, their model predicts that if a 100kg man reduces his calorie intake by just under 500 kilocalories per day, he will eventually lose 25 kilograms (the blue line). However in the first year he will only lose 50% of this weight, and will have lost 95% of the weight by the end of the third year . This more realistic rate of weight loss contrasts with the expectations created by the standard rule of thumb: the 3500 kilocalorie rule predicts he will lose 22 kilograms in the first year (the red line) – it’s not surprising that many people give up when they have only lost around half the weight they were expecting to despite sticking to their diet for 12 long months!

The exact shape of this weight loss curve doesn’t just depend on your diet, other factors also include physical activity, age, gender and most importantly, initial weight and body composition.  Chow and Hall are the first people to mathematically analyse weight loss as a dynamical system,  describing how the amount of body fat and lean mass in an individual change over time (where their total weight is the sum of your body fat and lean mass).   As well as describing how your weight will change over time, a dynamical system also shows when your weight will stabilise at a fixed point: where your weight will remain the same as long as you continue living the same lifestyle, in terms of diet and physical activity. "The irony is the most interesting place in a dynamical system is its fixed points, they tell you everything," says Chow.

Previously everyone had assumed that for a given lifestyle there was a unique fixed point. But Chow and Hall's mathematical analysis revealed that their model of weight loss, as well as all the models from past research, instead have a fixed line. "The steady state is not a fixed point, it's a fixed line and the implications of this are profound. There is no unique steady state: it depends on the contingencies of history. So if some accidental happening in life [altered your weight and body composition] (say in childhood you may have broken your leg and eaten a lot and become obese), then you’re going to be stuck there through no fault of your own. Whereas your twin, identical to you genetically and living the same life, has a totally different weight."

This sort of model, called an energy partition model, has been used in past research to describe how weight changes when too many, or too little, calories are consumed. But, in addition to analysing such a model as a dynamical system, Chow and Hall are also the first to use real data to design and validate it. In particular, an energy partition model uses a partition function to describe how the excess energy is converted to fat versus lean tissue (or how body fat versus lean tissue decreases when insufficient energy is consumed). "In the past people just assumed some partition rule that wasn’t based on data," says Chow. For example they may have assumed all excess energy was converted to fat, or half was converted to fat and half to lean tissue. "We came up with a better way to partition that’s more physiologically based. We looked at cross-sectional data to see how fat and lean is distributed and we used that to define the partition rule."

The team has created an online body weight simulator for individuals, researchers and doctors to use to produce more realistic weight loss expectations. In fact this tool produces a range of expected weight loss curves, recognising the variability in how different individuals' weight respond to changes in diet and exercise. They have also applied their mathematical model to whole populations, producing more realistic predictions about how government policies such as taxing sugary drinks, would impact on obesity levels.

But the real power of the old 3500 kilocalorie rule was its simplicity. Therefore Hall and Chow have also come up with a new rule of thumb by simplifying their model – for every 10 kilocalories you cut out of your diet you can expect to lose around half a kilogram. The bad news is that it will take a lot longer than the old rule suggested: you can expect to lose 50% of your total weight loss in the first year, finally coming close to your target weight (having lost 95% of the total weight loss) after three years. Both their model and their simplified rule of thumb make it clear that there are no quick fixes: we’ll have to change our diets permanently if we wish to reach and maintain a healthy weight.

Taking three years to lose weight might seem disheartening, but, as Chow points out, maintaining small changes will make a big difference: "Eat just one less cookie a day (about 150 kilocalories) you'll lose 7 kilograms over 3 years." So ultimately this is good news – you might just be one cookie a day away from a new and healthier you!

Calories do not count

Permalink Submitted by Anonymous on March 2, 2012

This is fine mathematics, but calories are an ancient dieting myth that has nothing to do with weight gain and loss.

It has been clearly demonstrated - as long ago as the 1950s - that different foods of equivalent calories have different effects on weight gain and loss.

The human body does not work in the same way as a wood stove, it is far more complicated. To use the word "calories" is to show ignorance of human biochemistry and how it works.

For example, if you eat 10,000 calories a day consisting only of fat, you would LOSE weight - until eventually you would die of starvation.

Read Gary Taubes if you are interested, or not if you believe that conventional wisdom knows everything.

Gary Taubes is just trying to

Permalink Submitted by Anonymous on December 7, 2012

Gary Taubes is just trying to flog his books onto a gullible public - follow the science rather than an author...

I agree, weight loss and

Permalink Submitted by Anonymous on January 25, 2013

I agree, weight loss and gaining has more to then with calories! If it would be that simple then everybody would be skinny and healty ...

Permalink Submitted by Anonymous on March 24, 2012

Well designed studies have shown that people on the "Atkins" type of diet lose more weight calorie for calorie than the usual low fat diet.