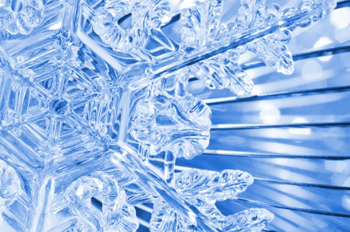 How does the present crystallise from the past?

Imagine you're walking through your local movie rental chain. You cruise past the comedies and dramas, and then, in the far corner of the store, you see it: a single disc with the title, "The entire history of the Universe: past, present and future!" You flip it over for a description: every atom revealed in stunning Einsteinian Spacetime Vision!

Back at home, you slide the disc in the player. The TV lights up with an eerily familiar picture: it's you, sitting on your couch, watching your TV. You hit rewind, and — even spookier — you watch yourself in reverse taking the disc out of the machine, exiting your apartment, and gliding backward to the video store. But that's not all. You can also see what every other being on every planet in the Universe is doing. Your finger flutters for a moment over fast forward — can you? should you? Curiosity wins out. You watch as the Universe balloons into deeper and deeper blackness until, suddenly, there is nothing at all.

Okay, so it would take a lot more than one DVD to encode the whole history of the cosmos. Yet many physicists believe that the past, present and future all exist simultaneously in a block Universe and our perception of time is just an illusion. Sure, you can watch one scene in your movie morph into the next, but they are all pre-recorded on that little DVD. As for free will — well, that went out with Beta tapes.

But now, George Ellis at the University of Cape Town, South Africa, is challenging that notion and trying to restore the idea that "now" is special and that free will exists with his model of a crystallising block Universe. "Free will is such a controversial thing," says Ellis, yet, "it is indeed one of the underlying things which motivated me."

The view that the past, the present and the future are of exactly the same physical character seems to be supported by Einstein's special theory of relativity, which describes how observers moving relative to one another may disagree about the order that events occur, preventing them from defining a unique and universal now (see the Plus article What is time?). However, in his prize-winning FQXi essay On the flow of time Ellis maintains that the most important property of time is that it unfolds. The past is already written, yes, but the future contains endless possibilities. To Ellis, the history of the Universe is a film that is still being made.

"People must take seriously the fact that time does evolve," says Ellis. If the models don't jibe with our perception of reality, he argues, maybe the problem is with the models. "Some of my colleagues seem to think their models trump reality!"

Ellis, along with his collaborator Tony Rothman at Princeton University, New Jersey, is proposing a modification to the standard block Universe picture in which the present marks the boundary between the flexible future and the frozen past, the moment when the film rolls through the movie camera and is imprinted with an indelible image. They dub this the crystallising block Universe.

It's a nice idea, but just how does the present become the past in this picture? Ellis found an elegant answer in quantum mechanics. In the quantum world, particles do not exist in a definite state until they are observed. Prior to observation, they are mathematically described by a wavefunction that encompasses all the possible states and properties that could be attributed to them. Ellis argues that the present is the moment when these quantum potentialities are transformed into a single observed reality. As physicists put it, the wavefunction collapses.

In the crystallising block Universe time does not roll out quite as uniformly as film spooling out from a reel. Wavefunctions created at the same moment need not collapse in unison, Ellis points out. Two photons, created in the same instant and headed toward a physics experiment where they will be observed, may hit the apparatus at different moments. One photon would then move into the past just a little sooner than its twin.

There is another pretty dramatic wrinkle in the neat line between past and present, too: sometimes, the present can influence the past.

A time machine for photons

Imagine a laser shooting photons toward a screen. Between the laser and the screen is a thin wall with two tiny slits in it. (This is an old physics workhorse called the double-slit experiment.) Gaze at the screen and you'll see an interference pattern generated by the light diffracting off the two slits and interfering on the other side. From this, you'd conclude that light must be a wave, flowing through space like a ripple through the ocean. 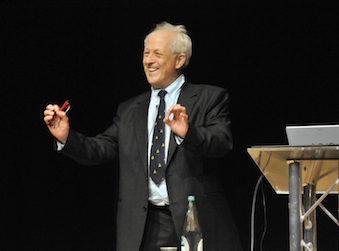 Now imagine that you can roll up the screen like a window shade. Behind it, you've placed two detectors — one lined up with each slit — that can register individual photons. When you now repeat the experiment without the screen, the detectors tell you that the photons are sailing straight through the slits like bullets, with no hint that an interference pattern could ever have been produced. From this experiment, you'd conclude that light must be a particle.

Could it be that light somehow "knows" what kind of experiment it is entering, and adjusts its behavior accordingly? It seems impossible, but experiment after experiment shows that if you're looking for a wave, light will act like a wave. Seek a particle, and light will be every inch a particle. Confused? So were quantum physicists.

To test the limits of this experiment, venerable physicist John Archibald Wheeler proposed playing a little trick on the photons. Why not wait to decide whether to do a wave measurement or a particle measurement until after the photons have already been through the slits and — presumably — have already picked whether to behave as particles or waves? This delayed-choice experiment was actually performed in 2006, and it proved that you can't fool photons. The light still behaved as a particle to the detectors and a wave to the screen.

Just how to interpret this result is a matter of debate. Does the photons' past history — their interaction with the slit — change in the future, once experimenters make their later decision about whether to measure light using a detector or a screen? The crystallising block Universe model captures this complexity by describing how events that are left behind in the "past" can remain uncertain, to become fixed only at a later time (see Ellis' and Rothman's paper).

"What you think is the present is not yet quite crystallised," explains Ellis. In other words, the film may roll through the camera, but the image sets in fits and starts, like a Polaroid in which one smiling face appears in advance of another.

The crystallising block Universe may help to describe peculiar photon paradoxes, but it leaves itself open to a major criticism: what if wavefunction collapse is not the correct description for the emergence of objective reality? There are dozens of other ways to think about quantum physics. For instance, Hugh Everett III famously suggested that every potentiality represented by a wavefunction actually comes to be — in a separate universe. In this many worlds view, fresh universes split off at every quantum fork in the road.

Theoretical physicist Julian Barbour, based in Oxfordshire, UK, imagines how this might work if Ellis himself were performing an experiment: "According to quantum mechanics, taken at the face value of its equations, George himself is split into many different copies of himself whenever he makes a quantum measurement."

Ellis, however, is far from convinced: "I just find that a fantastic thing. I simply can’t believe it!"

Barbour also takes issue with Ellis' insistence that we can feel time flowing: "My direct experience is of change of phenomena: the images that I see change. The idea that there is a flux of time is for me merely a convenient way of summarising a vast body of experiences that typically are like me holding up, before a mirror, a picture of myself as a boy in the village in which I still live and seeing and comparing the image of my face in the mirror next to the picture."

Could the true nature of time, then, be just a matter of taste? "For all practical purposes, the past and future are very different," agrees Sean Carroll, a physicist at the California Institute of Technology in Pasadena. But he adds, "That difference is nowhere to be found in the fundamental laws."

Yet Ellis believes that, eventually, the fundamental laws will bear out his intuition that time is real and that our choices help shape the future.

Even Ellis' critics admire that he listens to his own intuition. "George is trying to do something very difficult," says Barbour. "But that doesn't mean that he shouldn't try!"

This article first appeared on the FQXi community website, which does for physics and cosmology what Plus does for maths: provide the public with a deeper understanding of known and future discoveries in these areas, and their potential implications for our worldview. FQXi are our partners in our projects Science fiction, science fact and Stuff happens. You can read more about time in our packages What is time? and Time in a block universe.

In this article there is a suggestion that the detectors "placed behind the screen" somehow detect through which slit the photons went, - detect some time after the photons passed the slits. But this is misleading! There are no such detectors. In the actual experiment the detection happen at the time the photons pass through the slits (before they hit the screen). Big difference.

It is true that in the traditional double-slit experiment the detectors were placed at the slits in order to observe the particle like behaviour. The writer is referring to the set up for Wheeler's delayed choice experiment, when the detectors are actually placed behind the screen and the decision of whether you would raise the screen (and hence detect which slit the photon passed through) is made after the photons have passed through the slits. Do you think we should make it clearer that this is different from the traditional set up? Let us know and we'll have another look at the article.