Google the phrase "What happened" and you get some 530 million results. Humans, it seems, are pathologically curious. Raphael Bousso is no different — except he has a physicist's penchant for precision. He wants to quantify just how much "happened" within a region of spacetime. 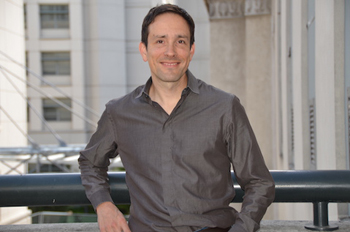 That goal is tougher than it sounds because when physicists usually attempt this feat, their quantum calculations tell them that an infinite amount of stuff happens within every tiny portion of spacetime — even though common sense tells them this is nonsense. So now Bousso, at the University of California, Berkeley, is trying to use gravity to tame those unwieldy quantum equations, potentially leading to a theory of quantum gravity, which could in turn help explain the physics of the early cosmos and black holes.

"We want to know how to describe our Universe, we want to know how did that start," says Bousso. His work is even more pressing since the LIGO collaboration announced the first detection of gravitational waves — ripples through spacetime that were set off when two black holes collided — in February 2016. "What happens inside the black holes that we now know happily merge somewhere far away and make gravitational waves?" Bousso asks.

Before tackling events on the grand cosmic scale, we need to get to grips with how things happen in much smaller settings, where quantum laws hold sway. Consider, for instance, Schrödinger's infamous cat. We all know the drill. A cat's in a box, along with a radioactive atom and a vial of poison. When the atom decays spontaneously — a quantum mechanical process — it triggers a contraption that breaks the vial, killing the cat. The standard tale argues that, while the box is shut, the radioactive atom's state is not definite, but rather it exists in a superposition of having decayed and not-decayed, putting the cat in a superposition of being dead and alive.

It's often said that this superposition only collapses once the box is opened and someone peers inside, sealing the precarious feline's fate. But it's not quite that simple. In the 1980s, physicist and FQXi member Wojciech Zurek, now at Los Alamos National Laboratory in New Mexico, and others suggested that superpositions can be snapped if the quantum object — in this case, the cat — interacts with the environment, without the need for a conscious observer. It turns out that just a few photons of heat jostling the cat are enough to do the job. This process is called "quantum decoherence." But what exactly happens in the box is still something of a mystery, and one with which Bousso is now grappling.

To this end Bousso is now examining a quantity that changes during decoherence called entanglement entropy. This provides a mathematical measure of how strongly regions within a quantum system — say Schrödinger's boxed cat — are connected to, and interact with, regions in the system's environment.

The calculations are tricky because when you try to conscientiously add up all the connections between the regions inside and outside the system in question, the answer hits infinity — because you can divide up the spacetime on either side of the boundary a countless number of times. But physicists have worked out ways to massage away these infinities in situations where gravity is extremely weak, allowing them to get sensible answers for the level of entanglement entropy and, hence, decoherence. 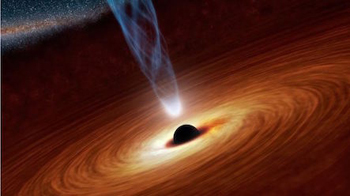 What would happen to a cat, or anything else, that fell into a black hole? Image courtesy Credit: NASA/JPL-Caltech.

But, asks Bousso, "what if gravity becomes strong?" That would be the case if Schrödinger's unlucky cat-in-a-box was approaching the centre of a black hole, for instance, where gravity is immense. In this case, the same tricks cannot be used to get rid of those pesky infinities. However, Bousso argues, physicists may be able to ease their calculations by combining the entanglement entropy with another quantity known as gravitational entropy, which is proportional to the surface area of the black hole's event horizon.

Bousso is now investigating whether taken together entanglement entropy and gravitational entropy can be used to quantify how much happens in cosmological settings, without giving ridiculous, infinite answers. For Bousso, this isn't just about imagining ever more gruesome deaths of pets, but about understanding black hole physics, in general, and potentially even developing a theory of quantum gravity.

Leonard Susskind, an FQXi member and physicist at Stanford University, in Palo Alto, California, is impressed by Bousso's approach. "As the world evolves it branches into a monstrous network of entanglement," he says. "I strongly applaud Bousso's bold attempt to quantify this network." Though Susskind adds that entanglement may not turn out to be the only ingredient necessary to quantify what happens, it is certainly an important one. "It will surely lead to new insights into gravity and quantum mechanics," says Susskind.

This article is part of our Stuff happens: The physics of events project, run in collaboration with FQXi. It first appeared on the FQXi Communities website. Click here to see more articles and videos about gravitational waves.