Can artificial intelligence be creative? One way to find out is to subject it to a Turing test: if we can't distinguish a computer's creation from a human one, then there are grounds for saying the answer is yes. 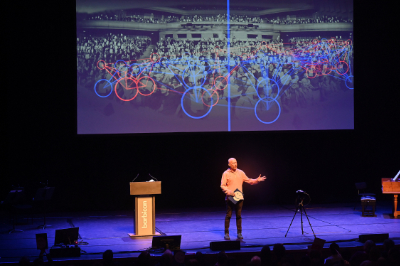 In his show The eternal golden braid: Gödel Escher Bach at the Barbican in London Marcus Du Sautoy performed just such a test, using the audience as judges. The show is part of an on-going project called Strange loops which celebrates the 40th anniversary of the intellectual cult classic Gödel, Escher, Bach.

The blurb of the show promised a computerised exploration of the music of Johann Sebastian Bach. Since I know very little about music in general, and nothing about Bach in particular, I took along Oscar Bandtlow, a mathematician at Queen Mary, University of London, who is interested in the connections between maths and music and has a deep knowledge of Bach.

Neither Oscar nor I have read Gödel, Escher, Bach, but that didn't matter because Du Sautoy explained the basics. The book, written by Douglas Hofstadter, isn't about how maths, music and art relate to each other, as the title might suggest, but about abstract structures that appear in all three. Hofstadter calls these structures strange loops: processes that appear to involve moving up though a hierarchy of levels but then, paradoxically, leave you where you started. MC Escher's famous lithograph Ascending and descending is a great illustration of such a strange loop. The mathematician Kurt Gödel showed that such loops exist in any sufficiently complex mathematical system, and they also appear in music, more below.

Hofstadter suggests that strange loops are what creates consciousness. Loosely speaking, the neurons and synapses within our brain form the bottom level of a hierarchy in which things like feelings, ideas, hopes, etc, emerge at higher levels. Consciousness arises because the hierarchy can twist back on itself: higher levels can influence the lower levels that determine them. Feelings and ideas can have a real physical impact, and this tangling of hierarchies gives us a sense of self.

In his show Du Sautoy weaves these lofty ideas into an entertaining and informative package, including live music by harpsichordist Mahan Esfahani and an ensemble from the London Contemporary Orchestra, and audience feedback. He shows Escher paintings and introduces the Shepard tone, a musical strange loop which seems to continually ascend in pitch without getting higher. A percussive version of the tone, which we hadn't come across before, is even weirder (see below). Du Sautoy also finds strange loops in the music of Bach (see this article to find out more) and even attempts an explanation of the proof of Gödel's result involving strange loops in maths (see here).

Interspersed are clips of an interview with Hofstadter himself, talking about strange loops and telling anecdotes about the birth of his famous book. The initial inspiration came from Gödel's work, apparently, Escher was added because Hofstadter's father said the book needed pictures, and Bach came in even later. For those in the audience who already knew the book, those snippets would have made up for the familiarity with the rest of the content.

Du Sautoy's skill as a presenter and entertainer is beyond doubt. He gets across abstract and difficult concepts, he is warm, funny and has impeccable timing. His passion is infectious and despite clearly being a very clever man, he never comes across as arrogant. Had the show only consisted of him talking, that would probably have been good enough.

But there was also music and audience participation. For the Turing test of creativity computational artist Parag K Mital created a machine learning algorithm that composes music in the style of Bach. Esfahani then played a piece by Bach in which gaps had been filled by the algorithm. The audience held up coloured cards to say which passages they thought were human-made and which machine-made. Those cards were, appropriately, being read by another machine learning algorithm hooked to a camera and the images displayed on a screen for everyone to see.

Although the results weren't properly analysed to see if the machine had passed the Turing test overall, this was a fun bit of experimentation that let everyone see for themselves whether the algorithm had fooled them (Esfahani played the piece a second time and the correct answers were shown). At the end of the show an ensemble from the London Contemporary Orchestra played a piece composed out of machine and human-made passages and the audience was able, by holding up their cards again, to influence the mood of the piece.

In the pub after the show I asked Oscar if he had been tricked by the algorithm. Even though he knows the Bach piece involved particularly well he was still a little unsure at times. We both felt that some passages were very clearly machine-made, though it's hard to pin down exactly why we were so sure on those. The harpsichordist's view struck a chord (sorry) with both of us: Esfahani found the machine-made passages harder to learn because they lacked a direction and instrumental or textural mirroring. With the machine-made passages he had to look at every note, but with Bach he didn't.

Du Sautoy also tested us on human versus machine-made paintings (see the video below for an example) and poetry (try [ http://botpoet.com ] Bot or not, it's fun). Again, a certain lack of edge, a blandness, tended to give the algorithms away.

Overall the algorithms didn't quite fool us, though it's hard to argue they never will. To be truly creative, though, they would have to do more than imitate styles. Machine learning might not be the right kind of AI to do this, I thought, since it works by spotting patterns in vast amounts of example data (eg Bach's music or paintings by Rembrandt) and then reproducing them. But then, humans are also pattern spotting machines. We might not start from scratch every time we look at something because, as Oscar pointed out, evolution and collective cultural memory have done some of the work for us. But ultimately we learn by recognising patterns and create by putting them together. Why should a machine not be able to do that?

We were not the only ones discussing the show over a beer. At the table next to us a group of what appeared to be young computer scientists were deep in discussion, and the pub nearest to the Barbican was rammed with audience members looking equally animated. It was hard to ascertain the make-up of the audience, but whatever their background, they seemed happy and intrigued.

My favourite thought to take away was something Du Sautoy said right at the end. Whatever AI will turn out to be in the future, getting it to do art will have more than just commercial and entertainment value. It may also help us understand what it's like to be an AI — to see into the soul of a robot.

Strange loops is still going on at the Barbican. On April 17 you can see Du Sautoy and Joana Seguro discuss Gödel, Escher, Bach in Three strange loops. In addition, Behind a façade of order is an algorithmic installation which explores what MC Escher might have done with today's technology. It's on until May 5.

Marianne Freiberger is Editor of Plus. She went to see The eternal golden braid: Gödel Escher Bach at the Barbican with Oscar Bandtlow, Senior Lecturer of Applied Mathematics at Queen Mary, University of London, on March 9, 2019.