'How to build a brain' 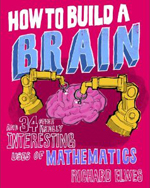 How to build a brain: And 34 other really interesting uses of mathematics

It's quite refreshing to find a book on maths that is so upbeat and infectious as How to build a brain. Certainly the title is a misnomer; one would immediately associate it to artificial intelligence or biology, but in reality this book is about how mathematics finds its way into many aspects of our world.

Richard Elwes, a researcher in mathematics, Plus author and keen communicator of science, believes in busting the myths surrounding maths (and the people who work with it). At the same time, he is intent on making accessible many ideas "that can astonish with their diversity, captivate with mystery, and enthral with beauty".

Cue How to build a brain in which he takes the reader on a journey through "35 landmarks of the mathematical world". In each chapter, Elwes introduces a key mathematical idea, often illustrated with a simple problem and surprising connections; who knew that Lewis Fry Richardson's interest in the likelihood of two countries going into war would lead to fractals? Or that there are just 17 possible wallpaper patterns? Furthermore, there are plenty of historical notes related to famous mathematicians and the reader gets an idea of what goes into establishing a bonafide mathematical theorem.

Topics as diverse as number theory, chaos, the famous P=NP problem, complexity and game theory, among others, are given the Elwes treatment. The writing is concise and always engaging, challenging the reader to think along the examples he presents. And there are also plenty of illustrations for those with short attention spans. My only criticism has to do with the lack of a further reading section, as most of the chapters would leave you wanting for more, though this is nitpicking over details as anyone can Google these days.

In summary, How to build a brain is a fun ride through mathematics and its developments, a great read for any teen or adult who thought the subject daunting. Anyone who reads it will not only end up learning a little more, but surely be amazed as to where maths pops up.

Linda I. Uruchurtu is a Postdoctoral Fellow in theoretical physics, Imperial College London.

It would be great if we have a Kindle edition of this book. I am in India and either these books are not available in stores out here or we need to incur the shipping charges if we order it via Amazon.

hi, this book is available at justbooksclc