You can see all our coverage of the ICM 2014 here

Five thousand mathematicians — it's rare to see so many of them gathered together, from all corners of the world. We're here at the International Congress of Mathematicians (ICM) in Seoul, one of the biggest maths conferences there is. It happens every four years and it's organised by the International Mathematical Union (IMU). Mathematicians from 125 countries have travelled to Seoul to listen to nine days of maths talks, meet each other, have fun, and work together. 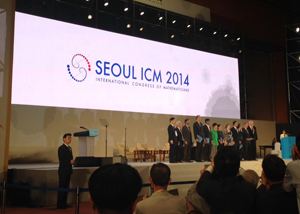 It's very exciting to be here. The five thousand squeezed into the convention centre this morning to see the congress opened by the President of South Korea, Park Geun-hye. "I firmly believe that the development of humanity in the future is closely intertwined with mathematics," she said. "Maths allows us to solve problems with new methods and principles, and creates much higher added value by converging with various fields such as science and technology, industry; and culture and art." To celebrate the congress taking place in South Korea, the government has declared 2014 the Korean year of mathematics.

But the main stars this morning were the recipients of the prizes that are awarded every four years at the ICM. First off, there are the Fields Medals, awarded to four mathematicians up to the age of 40, "to recognise outstanding mathematical achievement for existing work and for the promise of future achievement." The Rolf Nevalinna Prize, with the same age limit, is awarded for "outstanding contributions in mathematical aspects of information sciences". The Gauss Prize celebrates the impact of mathematics outside of maths and the Chern Medal is awarded for "accomplishments that warrant the highest level of recognition for outstanding achievements" in maths. 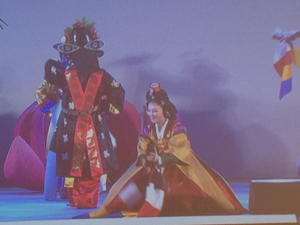 The ceremony started with a beautiful performance by South Korean dancers, but eventually Ingrid Daubechies, President of the IMU, proceeded to the exciting bit and announced the winners. The Fields medals went to Maryam Mirzakhani, for her work on mathematical surfaces, Artur Avila for work on dynamical systems, Manjul Bhargava for work in number theory, and Martin Hairer for work on differential equations. (You can read about the four recipients and their work by clicking on the links.)

The Nevalinna Prize went to Subhash Khot, for his work on understanding the complexity of algorithms and finding ways of making them more efficient (and if you get very annoyed by slow computers, you will appreciate that!). The Gauss Prize was awarded to Stanley Osher for work that has applications in image processing and computer vision. And the Chern Medal went to Phillip Griffith for work in algebraic geometry, differential geometry, and differential equations. 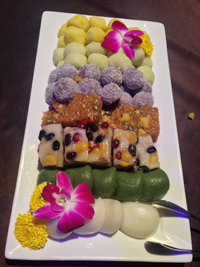 This ICM is only the fourth to take place in Asia, after the 1990 ICM in Japan, the 2010 ICM in India and the 2002 ICM in China. As a country that has seen remarkable economic growth since the devastating war in the 1950s, South Korea owes a lot to maths. A strong emphasis on education has ensured a steady flow of young and talented mathematicians that have helped to drive that growth. Helping emerging economies from around the world contribute to maths is one of the express aims of this congress. But this ICM is special for another reason too: for the first time, a Fields medal has been awarded to a woman, the Iranian Mirzakhani. It was great to see three women on stage during the ceremony: a medallist, the President of the IMU, and a head of state. After a long tradition of underrepresentation of women, mathematics seems to be on the right track (see here for our thoughts on this).

But of course, one of the most important things at any conference is the food. And from what we've seen so far, it's just as excellent as the maths. At last night's welcome reception we indulged in a huge range of beautiful Korean food, from jelly fish to smoked duck's breast. All served with nice fresh beer in the presence of an impressive ice sculpture. This ICM is definitely off to a good start and we're sure the fun will continue.

The *fourth* ICM in Asia

Thanks for pointing that out

Thanks for pointing that out and apologies for the mistake. We have corrected it.