Maths on a plane

This article is the winner of the university student category of the Plus new writers award 2008.

Let's face it. Some things in life are certainties. This is one of them: 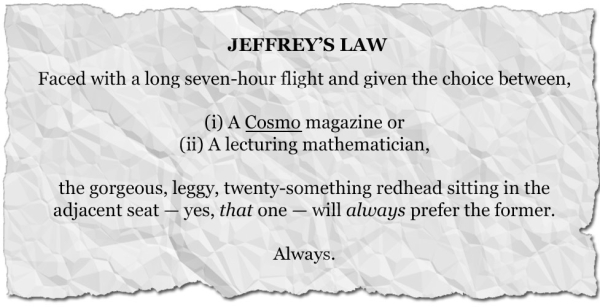 Or so I thought.

See, when your plane is plummeting towards the Atlantic Ocean and dozens of oxygen masks are simultaneously popped from their compartments like orange tic tacs, that's precisely what you're supposed to be thinking. That's what most sane passengers on board Flight 888 were thinking, anyways, but not me; personally, I was content to stare at the gorgeous woman sitting by my side and wonder — amidst all the screaming — whether, she'd be the type to favour wit and humour over a bulging biceps-and-rippling-abs physique. 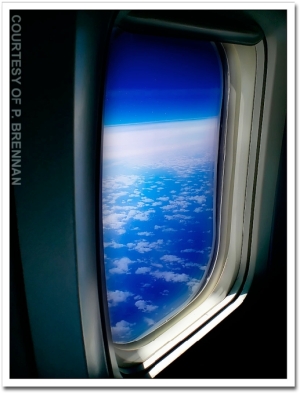 Mind you, this was just the setup (it turned out to be a false alarm, anyways, "Due to horrendous weather conditions," said the pilot), but I wanted to give you an idea of the truly epic life-or-death scope of the story to come. The real story, however, begins with her.

Even in the limited illumination of the cabin, her hair shone a rich, copper red. This framed not only a perfect curving face, but also two of the bluest eyes I'd ever seen. But this wasn't all. The earlier theatrics had scared her and despite clear skies and smooth sailing, I could tell she was still on edge. But this was perfect, you see, because it gave me a chance to swoop in and sooth her poor, tortured soul (that's how it's supposed to work, anyways).

"Just a little turbulence," I offered helpfully, "Nothing to be scared of — uh...," I trailed off, motioning expectantly towards her.

"Right. Rhea. It's Jeff, by the way. There's nothing to be scared of, Rhea," I assured her again.

She was silent for a moment; then leaning over me, pointed a slender finger out the window. "Nothing?" she said, raising an eyebrow, "Yeah, nothing is what's stopping us from plummeting, oh I dunno, twenty-thousand feet to the ground in a blazing tomb of shattering metal and death, right? ...Jeff?"

So it was going to be harder than I thought. "You're wrong," I blurted out, loudly.

She turned and looked at me, bemused.

"What you said earlier. About how nothing is holding us up." I ran my fingers through my hair. "Look, flying wasn't invented overnight, right? Da Vinci, Cayley, Lanchester, Joukowski, ..." I rattled off a few more impressive-sounding names, "Thousands of the greatest minds conspiring over hundreds of years with the sole purpose of reaching one of mankind's greatest dreams..."

"So Rhea, today, aerodynamics, all this —," I gestured out the window, "All this — is grounded in solid, rigorous mathematics. It's not nothingness that's holding us up. It's maths."

"Maths," she repeated disinterestedly, "I'm not very good at maths."

"You don't have to be," I replied softly.

She picked up the Cosmo magazine from her lap and froze for what seemed like ages. Then, seeming to have made a decision, she placed it in the pouch before her and leaned back in her seat, sighing. "Okay," she said, nodding, "Let's talk."

By now, we'd both finished our creations: three crisp paper airplanes assembled with the enthused precision only a 10-year-old could muster. She threw hers and laughed as it flopped straight to the ground. Mine careened suicidally into a bulkhead and the stewardess, having witnessed all our shenanigans, scowled in our direction.

As I held up the last plane, I explained. "There are four aerodynamic forces we need to talk about: thrust, drag, lift, and gravity." I said, gesturing in each of the four directions.

"As air flows over the plane, pressure is exerted on the surface of the plane. If there's more pressure on the bottom than the top, lift is produced, and the plane stays aloft so long as the force is greater than gravity." "But this," she said, waving at our surroundings, "is not made of paper."

"Ah ha! Obtaining lift is easy — heck, even a barn door raised at an angle produces lift. The second problem is drag, and so flight is actually the problem of maximising lift, while minimising drag."

"But how?" I asked excitedly, "What kind of aerofoil design do we need, Rhea?"

"Beats me," she said, amused by my enthusiasm, "But I bet you'll tell me all about it over dinner."

But with only two meal choices and really crappy wine.

"So..." Rhea said, prodding her chicken suspiciously, "When the Wright Brothers managed the first ever flight in nineteen-hundred whatever, they didn't actually know how the maths worked?"

With a fork, I poked my own in-flight meal timidly. Half-expecting the chicken to wake up and start clucking hysterically, I wisely opted for the fruit cup instead. "The Wright Brothers were at the forefront of experimental aerodynamics," I corrected, "Using their own wind tunnel tests, they produced different aerofoils until they found one that worked. Most importantly, it had to be curved (or cambered) so air flows faster over the top; this reduces the pressure on the top and produces more lift."

"But surprisingly, there were almost no meaningful aerodynamic theories at the time. We had the right equations — but nobody knew what to do with them."

I pushed my meal back with a grimace. "Oh, sure. Theoretical aerodynamics was rampant only a handful of years later. But, uh...I dunno," I said, teasing her, "You sure you're ready for this stuff?"

I leaned back and pretended to peer at her dubiously.

She just rolled her eyes and went back to eating.

The crew had turned off the lights and so most passengers were dozing quietly. Not us, though. We insisted on whispering softly, and with the lone reading light providing the only illumination, it had the eerie effect of making it seem like we were the only two passengers on board Flight 888.

I scribbled something on a row of napkins. "The three governing equations of fluid motion," I explained, "are known as the Navier Stokes equations. Together, they simply express three fundamental laws."

"This one here," I said pointing to the first equation, "says that the total amount of fluid — or, in our case, air particles — has to remain constant. This is just conservation of mass. Stuff can't disappear."

"The second one here is Newton's second law of motion: mass times acceleration is equal to the total applied force. That's just conservation of momentum."

"And the last one is conservation of energy — the total energy in the system must remain constant."

She looked disdainfully at the row of napkins strewn before her and pointed a single, perfectly manicured finger at one of them. "What can we do with that?" she asked. "It's tough," I conceded, "These equations are too hard to solve directly. And even for the two-dimensional problem (flow around a cross section of the aerofoil), it's still too complicated because of the geometry."

"So what we do is we consider a simpler geometry, say, the airflow around a flat plate; we solve the governing equations for this problem, then we construct a mathematical map that brings us back to the original, more difficult geometry."

"It's tough, I know. But the point is, the maths is all there. It's not a mystery anymore; not like it was for da Vinci or the Wright Brothers."

That — believe it or not — was the last time we'd talk about maths. She was relaxed now, and her head was gently propped against a pillow resting on my shoulder. But whether or not this zen-like state of relaxation was because of newfound understanding (as opposed to sheer mental boredom)...well, I'll let you decide.

In any case, it worked, and hell, she hadn't touched that damn Cosmo since we both started talking. "Are you asleep?" I asked.

She took her time answering. "Not yet."

"Sooooo...", I said, stretching out the vowel and grinning sheepishly, "Tell me, what do you do?"

At that, she whipped her head off and gave a look of such pure, seething outrage that...well, I tell ya', it would have immediately sent lesser mortals fleeing.

"Oooooh, I get it," she squealed, "Good looking stranger corners you on an airplane for a three hour balls-to-wall maths lecture, and then asks what you do. Typical," she sniffed.

"Wha&mdash?", I said, feigning mock hurt, "But I got you dinner and everything."

She gave me a mischievous grin, punched her pillow, and put her head back.

I pushed the button on my armrest turning off the overhead lights and plunging the two of us into blissful darkness. "Babe," I said, "You've no idea." Phil Trinh is now a doctoral student at Oxford's Mathematical Institute. He remembers this particular exchange fondly. So fondly, in fact, that even now — years later — he feels like slapping his forehead and muttering, "Gagh!"