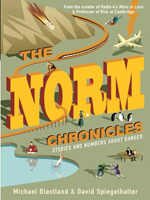 The Norm Chronicles: Stories and numbers about danger

By Michael Blastland and David Spiegelhalter

Risk is not an easy subject to understand. The theory is too abstract, and often too unpalatable, for people to be comfortable with. We are more frightened by rare risks over which we have no control than routine risks we face every day; a horrific but one-off event can seem more threatening than a less rare occurrence. Despite its rarity, child abduction by strangers is much more frightening to parents than the risks of road traffic accidents. People wish to be given straightforward answers, rather than be presented with hypothetical statistics and the workings of chance.

Rather than discussing the theory, The Norm Chronicles provides a guide to "risk, chance, luck and coincidence" through the life of the eponymous Norm, chosen to be the average guy, from the cradle to the grave, examining the impact that his various choices have upon him. Along the way we also meet his friends Prudence, whose tendency to be risk averse can border upon the pathological, and the reckless Kelvin. When Norm spots an unattended bag on the tube, he considers the likelihoods and concludes that it is probably just forgotten luggage. By contrast, Prudence panics about the possibility of a bomb, while Kelvin steals the contents. And, although these are stories about the lives of fictional characters, they allow us to appreciate the odds behind hazards, and give us an intuitive understanding of what the statistics and probabilities really mean to our lives.

Each chapter discusses an area of hazard, using both anecdotes and mathematics. The chapters are arranged in roughly the same order that corresponding risks are encountered in life, and are to a large extent self-contained, although the more complex theory tends to be found in the later chapters. Hazards discussed range from vaccination to unemployment, with a brief mention of the risks of horse riding in the section on drugs. People tend to find the risks of radiation particularly threatening, and I was interested in the statistics given in this section. For instance the radiation dose from an all-body CT scan is equivalent to that of standing a mile and a half from the epicentre of the Hiroshima explosion, or of that from eating 100,000 bananas, and has an associated loss of life expectancy equivalent to smoking 300 cigarettes. This narrative structure certainly causes the book to be more readable. My only complaint about the book is that, due to prioritising the narrative, the mathematical content is in my opinion not always introduced in the best order.

Overall, this is an entertaining book; I would not expect anything less given the reputation of its authors. David Spiegelhalter is Winton Professor of the Public Understanding of Risk at the University of Cambridge. He has had a distinguished career in medical statistics, and is also known for his work in science communication, including his documentary Tails you win: The science of chance. Michael Blastland is a broadcaster, writer and former producer of the BBC Radio 4 programme More or Less and the author of The tiger that isn't: Seeing through a world numbers. The Norm chronicles is by no means a textbook and requires no pre-existing knowledge of the area, yet it explains some potentially complicated areas of statistics with great simplicity and clarity, and is a fascinating read. I would recommend it to anyone, particularly those with an interest in mathematics, economics or Daily Mail headlines.

You can follow Norm, from childhood to old age, on the interactive microsite that accompanies the book.

Mary Fortune is a PhD student at the University of Cambridge. She is working on statistical techniques for analysing genomic datasets.

> I would recommend it to anyone, particularly those with an interest in mathematics, economics or Daily Mail headlines.

I wonder if Daily Mail headlines might change now. According to the Amazon review section, they've read the book:

Nah, of course they won't change...