It's bigger on the inside!

This is the standard reaction to Doctor Who's Tardis, and it also serves very well as a metaphor for mathematics. From the outside maths can appear insular and well-policed against intruders, but step inside it and you realise just how powerful and relevant it is to all of us. It's a secret the London Mathematical Society (LMS) decided to share with the rest of the world at its 150th anniversary event last week. Speakers, which included a Doctor Who screen writer and a designer of the Xbox, delivered talks that were broadcast live and for free to an online audience. They are available here (you need to hunt for the speaker you want to see in the timeline).

Visual entertainment provided some of the highlights of the afternoon. Maths teacher turned screenwriter Steve Thompson talked about Doctor Who, a show which "explores the store cupboard of mathematics" more extensively than most (except perhaps The Simpsons). Maths concepts make it into Doctor Who all the time. Edwin Abbott Abbott's classic book Flatland is an example: it tells the story of a two-dimensional square living in a flat world, who suddenly encounters a superior being from the third dimension and doesn't know what to make of it. Inspired by this, the Doctor Who episode Flatline has the Doctor battling a two-dimensional monster which causes everything it touches to become flat too — wreaking havoc with the world and giving the BBC graphics department something to sink its teeth into. You can see this and other examples of maths in Doctor Who in Thompson's talk, which starts around 21 minutes into the video.

Shows like Doctor Who and The Simpsons build mathematics into the plot, but there is another way it features on TV and film: as the force that drives visual effects. Simulations of smoke, fire, blood, water and other liquids, for example, make use of the equations of fluid dynamics, and require quite a bit of computing skill to implement (we've previously explored this here). Speakers Robert Pieké of the Moving Picture Company and James Reid of Milk Visual Effects explained their work and showed some impressive clips. You can see their talks at 1:17 and 3:43 hours into the video respectively. 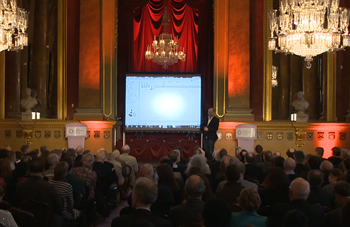 If you prefer Xbox fun to watching passively from the sofa, then the talk by Andrew Blake, Head of Microsoft Research, Cambridge, is the one for you. Blake explored how the Xbox was taught to see in three dimensions, enabling it to pick up your best dance moves or golf swings. Recognising a human form on a possibly crowded background is no easy task, especially since people come in so many shapes and sizes. As Blake explained, the Xbox creates a three-dimensional picture using two apertures (much like we create a sense of depth using our two eyes) and some basic trigonometry. Picking out a human form from a 3D image involves comparing individual pixels to many, many other pixels and working out the probabilities that what you see is a part of an arm, a face, or a leg. You can find out more in Blakes's talk, which starts 2:30 hours into the video. (And you can find our more about the maths behind the Xbox here.)

The afternoon featured classical mathematics too. A beautiful talk by mathematician Nigel Hitchin (0:42 hours into the video) explored the role of intuition in mathematics, using some straightforward examples. Robert Calderblank (3:15 hours into the video) looked at complex numbers and mathematical objects called quaternions which, despite being over 150 years old, form the basis of modern mobile technology. 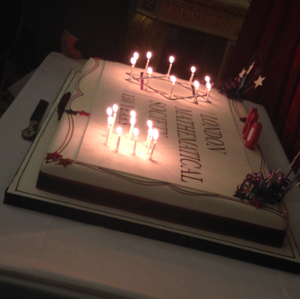 The event wasn't the obvious way for the LMS to launch its anniversary year. The society (despite its name) represents research mathematicians from around the UK, working mostly in universities. Many of them are pure mathematicians whose work may not find applications for decades or even centuries. Over its 150 year history members have included some of the most eminent mathematicians in the world (and impressively they have included women nearly from the start). See Frances Kirwan's talk, which starts 4:09 hours into the video, for more about the history of the LMS.

Given this august history you might have expected a sombre event featuring esoteric maths presented to a select audience. The decision to go with some non-academics, even non-mathematicians, talking to a wide audience sends a strong message that links the ivory tower to our living rooms, and indeed to the class rooms that contain the next generation of mathematicians, who may never be inspired if they can't see what kind of doors mathematics can open.

The anniversary year will see a range of other meetings and activities, see here to find out more.

A Different way to implement

A Different way to implement mathematics. I am really impressed with the video illustration.