This article is the runner-up in the general public category of the Plus new writers award 2009.

Recently I became friends with a keen knitter. She makes such beautiful creations, and knitting looked so meditative, that I decided to take it up myself. What I hadn't expected to end up thinking about during my new hobby was mathematics.

In fact, anyone attempting to knit or crochet for the first time soon finds they are doing a few calculations in their head (or on the back of an envelope) to get their creation going. Knitting involves maths right from the beginning: counting stitches, calculating gauge (that is the number of stitches and rows required to knit a 10cm square for a particular yarn), working out how many skeins (the bundles of yarn) are needed for a project, and rifling through change to work out how much yarn you can buy at the yarn shop sale. The list is endless.

Mathematics can he applied to the design of a knitted creation to produce something that is both beautiful and geeky. A stripy scarf can be knitted in Fibonacci stripe, with the number of rows of each stripe corresponding to the Fibonacci sequence, where each number is the sum of the previous two numbers, starting with 0 and 1 to get the sequence 0, 1, 1, 2, 3, 5, 8, and so on. Or perhaps the scarf will be made in a pattern depicting a series of permutations. For example, the group of all permutations of a three-element set have been knitted as a scarf in the picture below, where the three elements are represented by green, grey and black. Mathematics distinguishes abstract designs from repeating patterns, which are often a perfect example of rotation or reflection symmetry.

Figure 1: This scarf depicts all permutations of a set containing three elements. Knitted by Sarah-Marie Belcastro.

While mathematics is essential in order to knit, needlecraft can also aid mathematics in return: knitting and crocheting can be used to create real models of mathematical objects that seem counter-intuitive. It's visual geometry at your fingertips (or needle tips); a fantastic way to view objects that aren't so easy to think about in your head.

Knitting is particularly useful for making surfaces, or two-dimensional manifolds. Even better, non-orientable surfaces; that is those which have only one side, or no distinct inside or outside. A Möbius strip is a non-orientable surface with a boundary, which can be easily made by cutting a strip of paper, half-twisting one end, and taping or gluing it to the other end. To prove to yourself that it has only one side, you can draw a line from one end down the middle of the strip to find that it ends up finishing on the other "side" of the seam. If you then continue drawing the line, another full circuit will see you back at the starting point, and you will have drawn a line twice the length of the original piece of paper.

A better way to construct a Möbius strip is to knit and include the twist in the construction of the surface itself, rather than introducing a twist at the end. Figure 2 shows some seamless Möbius strips with the twist built into the design itself. 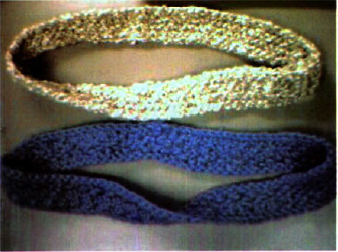 Another non-orientable surface is a Klein bottle, named after the mathematician Felix Klein who discovered it in 1882. It differs from the Möbius strip in that it has no boundary. It can be made, abstractly, by joining the edges of two Möbius strips together, or by folding the length of a Möbius strip in half and joining the edges formed. Admittedly, if you're picturing this in three dimensions a little liberty is taken, as strictly speaking, non-orientable surfaces cannot be embedded in three-dimensional space without self-intersecting or introducing so-called singularities. 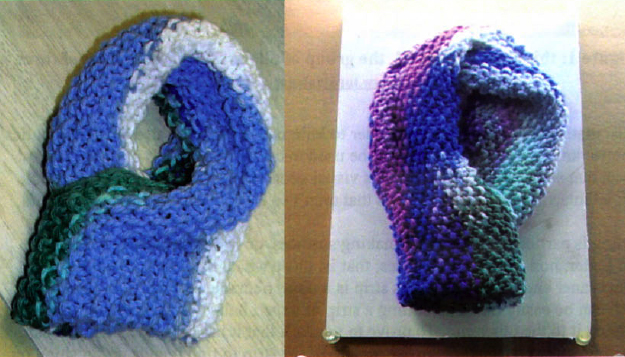 There is a serious side to all of this casting on, stitching an yarn-hoarding. Once knitted, the properties of counter-intuitive shapes can be more easily understood and explained. Mathematicians at the University of Bristol, who are nifty with hooks as well as numbers, have been able to crochet a complicated surface known as the Lorenz manifold, named after the meteorologist and mathematician Edward Lorenz (see Plus article Chaotic crochet. The crocheted model has been used, in conjunction with computational methods, to further research the properties of this object. In 1997 a crocheted model of the hyperbolic plane, the first usable physical model of such a surface, was used to study its properties. There are even mathematicians who have turned their hands to knitting fractal objects. (Read more about the hyperbolic plane in Plus article Strange geometries.) 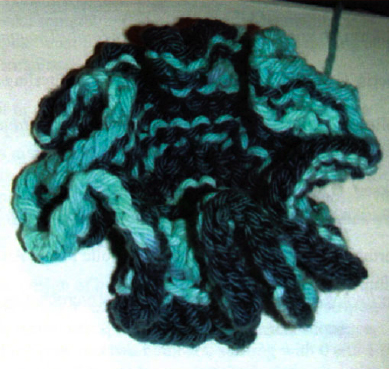 Crafty maths doesn't just stop with knitting and crocheting either. Mathematics can be applied to cross-stitch, quilting, embroidery and weaving. Ada Dietz, an American weaver, used algebraic expressions to create weaving patterns as far back as 1949, while quilt makers have based quilt designs on many different mathematical concepts such as the conic sections and trigonometric functions.

There is, of course, another dimension to mathematical knitting and that's its practical, everyday use. While creating your mathematical objects for research purposes, you can also be knitting yourself some mathematically quirky clothes and accessories at the same time. Speaking of which, I really must go and finish that Klein bottle hat ... 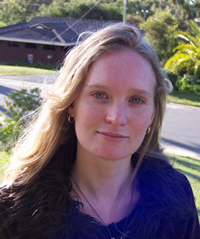 Lucinda Matthews is a Brit in exile in Melbourne, Australia, with a one-year-old daughter and a growing quantity of yarn. She studied pure maths and physics at university and now works as an energy analyst. Her knitting skills are improving.