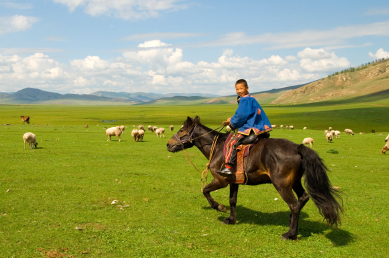 Central Asian steppes have faired better under nomad ownership than under agricultural collectives.

A striking example of successful common ownership comes from the grasslands in central Asia. Historically, the steppes of Mongolia and neighbouring areas in China and Russia have been dominated by nomads who continually moved their herds around the land. In Mongolia nomadic traditions persisted until the middle of the twentieth century, but in China and Russia they were replaced by state-owned agricultural collectives which enforced settlement. Satellite images show that the land in both China and Russia has suffered heavily as a result of this policy, while the grasslands in Mongolia remained comparatively healthy. Chinese attempts in the 1980s to rescue the grasslands through privatisation also proved unsuccessful. In this example, and contrary to current economical wisdom, privatisation and tightly controlled state ownership have both failed.

For the common good

Elinor Ostrom has been honoured for a body of work which closely scrutinises a vast number of case studies of common ownership, from irrigation systems in Nepal to groundwater basins in California. Ostrom's results show that, while it's not the best solution in all cases, common ownership can and frequently does work. Often this is down to centuries' worth of knowledge and experience that have gone into evolving a common ownership system, the subtleties of which external authorities often fail to appreciate. But Ostrom has also identified a set of more abstract rules and procedures which need to be in place to make common ownership work. Some of her more surprising conclusions hold interesting lessons for state-owned or privatised property, too. Ostrom shows, for example, that the users themselves, rather than impartial outsiders, should monitor procedures and dish out punishments where necessary. Decision making processes should be as democratic as possible, allowing every user to take part in building and amending the rules that govern the group. Ostrom also shows that a bottom-up approach to building an organisation, with well-functioning smaller groups coming together to form a larger cooperation, can be more beneficial than the opposite top-down approach. 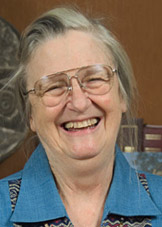 Ostrom's focus on case studies contrasts with the more mathematical approach of some previous Nobel laureates. A mathematical angle on human interaction comes from game theory, which examines how rational and self-interested players behave in a game defined by a clear set of rules. Cooperation, which is based on such fuzzy things as trust, may seem difficult to model in this way, but mathematicians have had a go at it using games that span several rounds. In this way, players who betray trust or violate the rules can be punished in a subsequent round.

An example is the repeated version of the prisoner's dilemma, in which two partners in crime are interviewed separately by the police and given the option to either remain silent, or betray the other. If both remain silent, then both get a mild sentence, if both betray, they get a slightly longer sentence, but if one betrays while the other remains silent, the betrayer goes free and the other gets the maximum jail term. The best option is clearly for both to remain silent. But if this game is played only once, then the stable set of strategies, in the sense that neither could improve their outcome by changing their own strategy, is for each to betray the other. The dilemma shows that the best strategy for an individual is not always the best strategy for a group. This changes, however, if the game is repeated many times. Fear of retribution from the other partner now means that both remaining silent emerges as the stable strategy — the best strategy for the individual coincides with that for the group in this case. The game theorist Robert Aumann has developed a comprehensive theory of repeated games based on the prisoner's dilemma, and received the 2005 Nobel Prize in Economics for his efforts.

While Ostrom did use Aumann's theory to interpret her case studies, her work also showed that game theoretical models needed to be refined to capture the nuances of human interactions. In a series of laboratory experiments Ostrom asked volunteers to play cooperative games, which involved contributing to a common pool to reap individual benefits. An important, though perhaps unsurprising, lesson from these experiments was that human behaviour is not as rational as game theory has traditionally assumed. One of Ostrom's innovations, inspired by the results of her case studies, was to introduce scope for punishment into the experimental games. Her results, supported by those of other experimentalists who built on her work, suggest that people gain intrinsic, if not to say irrational, pleasure from dishing out punishments to others, even when punishing others comes at a cost to themselves. Symbolic sanctions turned out to be just as effective as material ones, suggesting that it's fear of public shame, rather than financial loss, that makes punishment work. Game theorists responded eagerly to these results, and a wide range of more sophisticated mathematical models, many based on the classic prisoner's dilemma, have been developed since. Overall, Ostrom's results have inspired a wealth of research into human cooperation, not only in game theory, but also in social economics and evolutionary biology. 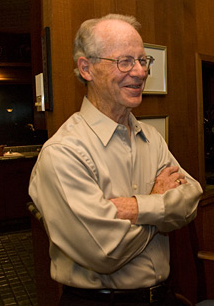 Cooperation and conflict resolution also play an important role in Oliver Williamson's work. Williamson's central question was why some businesses band together into hierarchical firms which incorporate a whole range of production stages, while others remain independent and focus on providing just one particular good or service.

Obvious advantages of large firms are that within a firm there is no costly haggling or squabbling over contracts, and that conflicts between departments can be resolved by a higher authority. The advantages of an independent business, on the other hand, are that the administrational baggage is relatively small, and that there is a smaller risk of managers abusing their power than in a large hierarchical structure. Clearly no set of advantages outweighs the other, since both large corporations and independent businesses exist in the market.

Williamson realised that the answer to his question hinges on the degree of mutual dependence between buyer and seller, as well as on the ease with which contracts can be negotiated. If this mutual dependence is strong, for example if it is difficult to find another buyer or seller should a deal fall through, then the tendency is for the partners to band together into a larger firm, with the bigger organisation integrating the smaller one in a hierarchical structure. Similarly, if the complexity of the business or uncertainties in the markets make it difficult to come up with contracts that are satisfactory for both parties, then the parties are better off within the same firm, as the costly negotiations can then be eliminated. If, on the other hand, contracts are simple and straightforward and there is plenty of competition around, the market alone will work efficiently and larger firms aren't needed and are less likely to evolve. 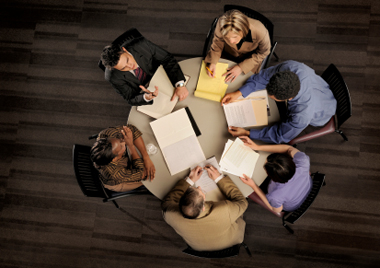 Conflict resolution can be easier in firms than in the market.

Williamson built an extensive theory on these ideas, which has since been supported by strong evidence from real life markets. A study of coal mines and coal burning power plants, for example, has shown that these are much more likely to be commonly owned if they are mutually dependent because other mines and power plants are too far away to compete. The theory has also influenced US policy on company mergers: while these were traditionally seen purely as an attempt to dominate the market, it is now recognised that they often occur for reasons of efficiency, to cut out difficult contract negotiations or eliminate uncertainties.

Like Ostrom, Williamson's work is not mathematical, but here too the mathematical treatment soon followed. When conflicts arise within firms, much hinges on the reputation and integrity of an arbitrating manager, and mathematicians have used repeated games, where a manager's reputation can change from round to round in response to previous actions, to model conflict resolution in this context. On the markets, negotiations are often complicated by a lack of transparency, with both parties keeping their cards close to their chests, strategic posturing, like issuing empty threats or promises, and uncertainties in the markets, for example about the future price of commodities. Game theoretic models of situations where players have incomplete or asymmetric information have taken a long time to develop, but inspired by Williamson's work there are now several extensive models of bargaining and contract negotiations.

So it seems that the award of this year's Nobel Prize in Economics not only carries a message about the relationship between economics and the markets, but also one about economics and mathematics. While mathematical models have been invaluable in economics, economics cannot live on maths alone. Any mathematical model is only as good as its assumptions, and these need to be constantly refined by insights that come from careful observation of the real world. Ostrom and Williamson have been honoured for providing such deep insights.