Life, choice, other problems...and some answers

In the previous article we looked at some things physics as we know it can't quite explain. These include the bulk behaviour of molecules, the mysteriously slippery concept of information, life, and also the idea that we humans, and some other animals, have the ability to make free choices.

We also suggested that a new framework for thinking about the physical work, called constructor theory might help. Indeed, the theory has no trouble describing information in physical terms (see here to find out how). But how is it useful to other problems? That's what we will look at in this article.

Thermodynamics: The one way street

In the previous article we noted that some physical processes, such as an egg being whizzed by a blender, appear to have a direction that can't be reversed. This fact is captured by the second law of thermodynamics, which, loosely speaking, states that a physical system, when left alone, will never, ever get more orderly of its own accord. The situation which has egg molecules separated into yolk and white is more orderly than a situation which has them all mixed up. Therefore, the blender is never going to put the egg back together again. 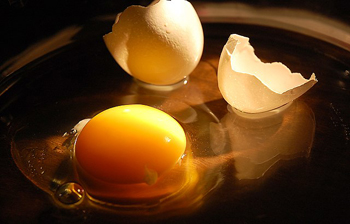 Why can't an egg be put together again? Image: Sauvagette, CC BY-SA 4.0.

This directionality clashes with the fundamental laws of motion that guide the behaviour of individual particles, which are reversible. Indeed, you would only be mildly surprised to see an individual egg molecule retrace its path to where it started. The second law only appears to hold when there are sufficiently many particles, but how many is sufficient? The general consensus, given this problem, is that the second law isn't really fundamental, but only holds for large systems and is somewhat approximate in nature.

In our egg example we can think of the blender as the constructor transforming the egg from whole to mixed. The fact that, in theory, all egg particles could retrace their paths, doesn't mean the blender (or any other constructor) can actually make them do this. Even if you ran the blender exactly backwards, the result clearly wouldn't be a fully formed egg.

Once you separate the constructor out from the process it's meant to bring about, you see there's no contradiction. "These two levels of explanation, fundamental laws and statements about possible and impossible transformations, are co-existing and they are compatible," explains Marletto. "So constructor theory gives us an idea of how irreversibility can be brought into fundamental physics without compromising the reversibility of the microscopic laws."

And in case you are wondering why the term "thermo", which stands for "heat", appears here, it's because an early version of the second law says that heat always flows from hot objects to cold objects, not the other way around. There's a conceptual link from ideas surrounding heat to ideas surrounding order and disorder. Interestingly both those areas can in turn be linked to information (see here to find out more), which is exactly what constructor theory set out to explain. Marletto's work in this area doesn't only focus on the second law, but comprises an entire constructor theory of thermodynamics.

Let's now take a giant step upwards and look at systems that are complex enough to be alive. The question of what constitutes life, and how it first came about, is a difficult one and it's not one that constructor theory can answer. However, the theory does shed some light on a worry that has been around for some time: the suspicion that the very existence of life might be incompatible with the fundamental laws of physics. 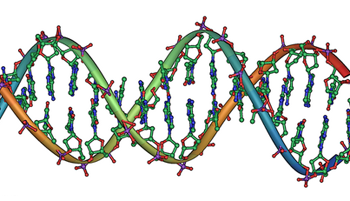 Is life consistent with the fundamental laws of physics?

Central to life, and to this question, is the notion of replication: the information encoded in our genes can be copied from generation to generation, with occasional errors allowing organisms to change over time, adapting to their environment. This process is the essence of Darwin's theory of evolution through natural selection. But although hugely successful, Darwin's theory never makes contact with the fundamental laws of physics which, after all, govern the elementary building blocks of nature all living organisms are made up of.

The problem becomes particularly stark when you consider an extreme example of replication: bacterial cells, which can produce copies of themselves to an astonishing degree of accuracy. Eugene Wigner, one of the founding fathers of quantum physics, once attempted to calculate how likely it is for such an accurate self-reproducer to exist under the laws of quantum physics, and found this likelihood to be vanishingly small. Wigner's argument wasn't entirely sound, but the idea that life and fundamental physics don't get along has stuck among some physicists.

Constructor theory again has the tools to cast the problem in a new way. The theory was developed to describe information in purely physical terms. And since "being copy-able" is part of the essence of information (see this article) the theory provides a language to describe the notion of replicators and self-reproducers. It can also describe what it means for information, such as the information contained in DNA, to be instantiated in physical form.

Using these descriptions, Marletto asked whether the existence of systems that can be replicated or self-reproduce is compatible with physical laws like those we currently have, laws that don't have the existence of life programmed into them from the outset. Her answer, luckily for physics and Darwin, shows that the logic of natural selection is in fact permitted by our laws of physics and that evolution as described by Darwin can actually happen under those laws. "All the things the theory of evolution takes for granted are compatible with the fundamental interactions nature gives us," says Marletto. Phew!

"It's a nice prediction because it tells you that if you randomly look around the Universe and you find life, then even if this life is very different from ours in terms of chemistry and elementary components, one thing that should be there is this replicator-vehicle logic," says Marletto.

Free will and knowledge

The information on this page constitutes knowledge.

While we can all be pretty sure that we are alive, we can't be so sure that we have free will. As we saw in the previous article, the idea that we, and possibly other animals, should be able to make free choices that impact the physical world doesn't sit well with the fundamental laws of physics. Marletto stresses that constructor theory isn't yet up to explaining free will, but we can nevertheless speculate how it may be able to help.

This definition doesn't just apply to human knowledge. The information contained in genes, replicated in different organisms over generations, would constitute knowledge in this sense too. "Knowledge [defined in this way] appears to be there everywhere where there is life or conscious activity," says Marletto. "The hope is that by bringing this concept of knowledge into fundamental physics in an objective way, we can then approach the question of how a system that is conscious and is capable of producing knowledge, for example by performing a free choice, can be compatible with the laws of physics."

Free will and emergence

Apart from asking whether free will is compatible with the laws of physics, you can also ask how it can possibly arise from the many mindless, microscopic components that make up our bodies and brains. A common approach to an explanation involves the concept of emergence. As ant colonies and beehives show, systems of many components can add up to more than the sum of their parts: the system as a whole can be able to do things, or possess properties, that individual components can't do or possess. Such abilities and properties are emergent phenomena. In a similar way, mysterious things like consciousness and free will may also emerge from the complex jumble of atoms and molecules that make up living systems. 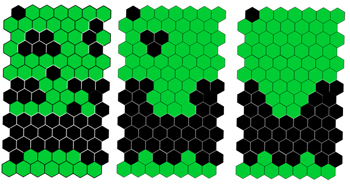 In this cellular automaton a hexagonal cell changes its colour if four or more of its neighbours are not of its own colour. The image shows the first two time steps, but you can let the automaton evolve over many more steps and often interesting patterns emerge. This particular cellular automaton has been used to explain the pretty patterns found on lizards (see here).

Mathematical proof of emergent phenomena comes from objects called cellular automata. An example of such a thing is a grid of cells (for example squares or hexagons) each of which can be either black or white and can also switch between the colours. Whether or not an individual cell changes its colour depends on the colour of its neighbouring cells. When you kick a cellular automaton into action by seeding some cells with colours, you can often see complex patterns emerge and move across the grid, just as if they were alive. (And indeed, John von Neumann used cellular automata when he was thinking about life and the issues surrounding self-reproduction).The simple rules of a cellular automaton are analogous to the traditional laws of physics: they work locally, applying to individual components of the system. (You can find out more about cellular automata here.)

This approach has been thought up by Sara Imari Walker, an astrobiologist and huge fan of constructor theory who is collaborating with Marletto. Walker has an interesting take on free will: she is suggesting, not only that free will can arise in nature, but that nature actually favours it.

Walker points to the fact that knowledge, mediated by our ability to make free choices, has enabled us to make significant changes in the world around us. Just think of the satellites we have launched into space and the fact that we have changed the climate of our planet. In other words, the existence of an intelligent civilisation with the ability to act freely opens up more possibilities as to what could happen within the Universe than there would be if the Universe was only inhabited by dumb microbes.

In analogy to the second law of thermodynamics, which states that nature always evolves towards disorder, Walker suggests that it might also always strive towards situations that afford more possibilities. Since free will, coupled with knowledge, opens up such possibilities, nature should therefore favour the evolution of intelligent beings that can make free choices. "I suggest that one of the reasons [there was a] transition to a kind of physics where information and knowledge became the dominant powers is because there is this giant space of possible things that could exist, but they can't exist without a system that can create them," she explains.

Walker's project is still work in progress, as is constructor theory as a whole. Whether or not the attempt to describe all of physical reality in constructor theory terms will be successful remains to be seen. But either way, Marletto believes that the constructor theory programme will at the very least bring interesting insights into fundamental physics, and revive a spirit of daring physics. "I wish physics would come back to the [spirit of] decades ago when people were more into trying out interesting new frameworks, even if they turned out not to work," says Marletto. "It's because they tried out those frameworks that we eventually found the right ones."

The idea is nicely summed up in a quote by Albert Einstein, "We cannot solve our problems with the same thinking we used when we created them."