The lines of intersection and metallic numbers

We are looking at an infinite family of circles. The first circle is centred on the point

. Every other circle is centred on the South pole of the previous circle and has radius

times that of the previous circle. (In the first example in the main article we have

, but we give a sketch of the proof for general 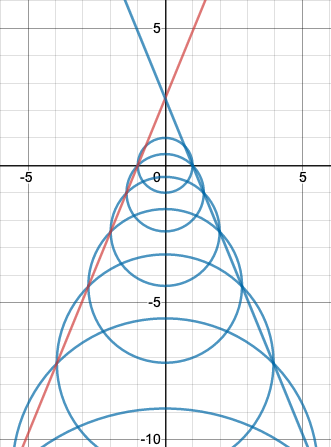 The family of circles with the two lines of intersection. The y-intercept is the silver ratio.

-axis lie on a straight line, as shown in the diagram above.

-axis in the point

as claimed in the main article.

First notice that the radius of the

. This is because the first circle has radius

and any other circle has radius

times the radius of the previous circle.

Also notice that for

That’s because the centre of the first circle is

-coordinate of the centre of any other circle is the 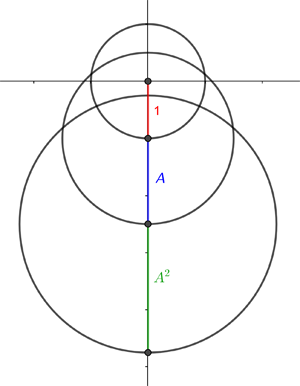 The centres and radii of the first three circles.

Our proof rests on the fact that there is quite a simple transformation of the plane which sends each circle in the family to the next one along. This transformation, call it

, consists of a scaling by a factor of

, followed by a translation by 1 in the direction of the negative

-axis. In other words,

sends a point with coordinates

to the point with coordinates

We leave the following two facts for you to prove:

circle in our family gets sent by

to a circle with radius

And that’s exactly the

circle in our family, as required.

To show that the intersection points of circles lie on a straight line as claimed, let’s first think about the line segment

which connects the intersection points 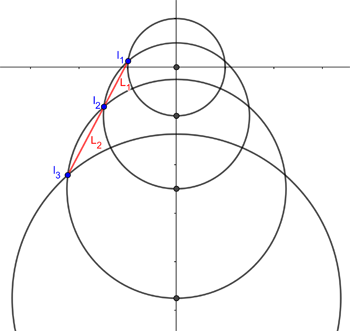 Points of intersection and the line segments connecting them.

to another straight line segment (rather than some curvy shape). Because

sends each circle to the next one along, that line segment, call it

is the one connecting the intersection points

have the same slope — and from this it follows that

The argument above also shows that

to itself. This implies that

Back to the main article.