Prime numbers — we've often reported on them here on Plus, and in particular we've followed the progress of the Great Internet Mersenne Prime Search. It's one of the longest-running grassroots distributed computing projects. Users donate their computing power to search for these special type of primes, and of course the goal is to find bigger and bigger ones. The latest prime to be discovered by the project is 257,885,161-1. This massive 17,425,170 digit number, was found on 25 January 2013 on the idling computer of University of Central Missouri mathematician, Curtis Cooper, who bagged $3000 in prize money for the discovery. You can read about it here and about previous GIMPS discoveries here. 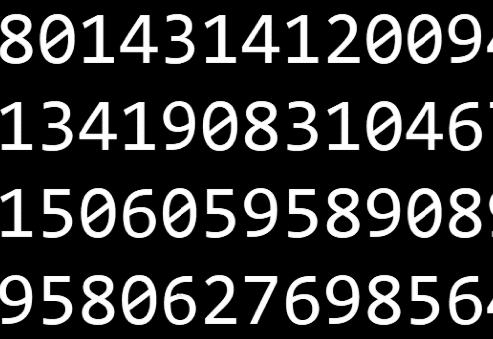 Zoom into prime numbers with this interactive deep zoom.

Finding prime numbers is hard work. To test whether a given number is prime, that is, whether it has no other divisors than 1 and itself, you need a lot of computing power if the number is large. Mersenne primes are prime numbers that can be written in the form 2p-1, where p is also a prime number. And the reason why GIMPS searches for those primes in particular is because there are faster ways of testing them than there are for other numbers. When a new largest known prime is discovered it is usually a Mersenne prime.

But this leaves a lot of other primes undiscovered. The first few Mersenne primes are:

Last November Microsoft Azure launched a project to find all those "lost" primes that may be lurking in the gaps. The Prime Challenge invites schools, universities, businesses, clubs or individuals to search for those hidden gems, using cloud computing. "In order to map large prime numbers of thousands of digits, powerful technology, which can quickly sift through and crunch numbers, is required," says Steve Plank, Cloud Computing and STEM Evangelist at Microsoft. "The purpose of the Prime Challenge is to give individuals, organisations, universities and schools the opportunity to access the computing power of our datacentres to find and claim new prime numbers."

One university has already played a major part in helping to launch the Prime Challenge, as it was students at University College London (UCL) that helped to design and build the online results table. The table records and verifies all the candidate prime numbers submitted by participants, shows the different challenges that are taking place and allows you to rank your new prime number against those found by your peers.

The Prime Challenge will run until 29th March (2903 — a prime number). To participate in the challenge, users will need to visit the prime challenge website and follow the steps online.

Or, if you would just like to marvel at the enormity of the largest known prime, visit this interactive deep zoom that has been produced as part of the project.

Please change the URL underneath "the prime challenge website" in the second to last sentence. At the moment it is:

http://plus.maths.org/content/www.primechallenge.org
(which doesn't work)
and I think it should be:

Thanks for pointing that out, we've fixed it.