The luck of the draw

On a cold winter weekend early in January, football fans around the country settled in to watch the legendary Third Round of the FA Cup. But how many of them realised that a mathematical improbability had turned the day's action into a once-in-a-lifetime quirk of fate?

The mystique of the FA Cup has grown up because, at least in theory, any club can win it. Unlike the Premiership title, which only 20 clubs compete for each year, the FA Cup is open to everyone, and the Third Round is when the top two divisions of English football enter the fray to join the smaller clubs in the competition. Every small club dreams of playing Manchester United, every armchair fan enjoys an upset, and the Third Round of the FA Cup is when it can all happen.

This December's extraordinary draw pitted all 20 Premiership teams against lower league opponents. Not a single match was guaranteed a Premiership winner, and the weekend promised giant-killing opportunities like never before. Non-league underdogs Yeading were the centre of attention as they faced Premiership team Newcastle in the ultimate footballing David and Goliath encounter. 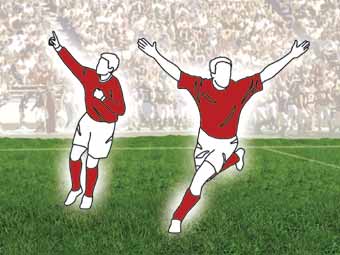 A chance for the underdogs?

Statisticians agree that the weekend's line-up really was a once-in-a-lifetime event. According to Dr Mark Dixon, football expert at the Royal Statistical Society, the probability of a draw free of Premiership clashes was only about 1.2%. "Put another way," he says, "you should expect to see this just once every 83 years on average."

The FA's own historian David Barber is also impressed: "I would be surprised if the top-division clubs have avoided each other before." The trouble is, nobody knows for certain how far back to check. Although the top two divisions traditionally sit out the competition until the Third Round, a closer look reveals it's not that simple.

"The format of six competition proper rounds, followed by semi-finals and a final, dates back to the 1925-26 season," explains Barber, "but when I checked whether all the old First and Second Division clubs received exemption until the Third Round in that season, I found that 41 did and three didn't."

One thing is certain: nobody can remember a weekend like it, and it's no surprise that this 1-in-83 event was probably an all-time first.

But while some sporting eventualities are surprisingly rare, others are deceptively common. Take for example a little-known statistical curiosity of football known as The Birthday Paradox. This unlikely-sounding proposition says that in a group of 23 people there's a 50:50 chance that at least two will share a birthday. As the popular science writer Simon Singh points out in his bestselling book Fermat's Last Theorem, 23 is exactly the number of people on the field at the start of a football match - two teams and a referee. If the paradox holds true, around half of all football matches should begin with a shared birthday on the pitch.

In 1997, Robert Matthews took up the challenge of proving it. Investigating all 10 Premiership matches one April weekend, he discovered six games with birthday coincidences - a vindication for the Birthday Paradox.

Birthdays aside, how did it turn out for Yeading in the end? Well, they took to the field facing odds of 16 to 1 against them and held out until half time with no goals scored. But the bookies favoured a 2:0 or 3:0 defeat, both at odds of 13 to 2, and sadly for Yeading the bookies were proven right. Newcastle beat the upstart team by two goals to nil.

Were Yeading wrong to even hope for a victory? Perhaps not. The odds gave them a 1 in 17 chance of winning and, as the draw showed way back in December, stranger things have happened. 4.9 times stranger to be exact.

Read more about the mathematics of football and chance on Plus