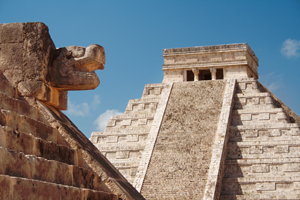 The great Mayan pyramid of Kukulcan "El Castillo" as seen from the Platform of the Eagles and Jaguars, Chichen Itza, Mexico.

How do you construct a right angle when you haven't got a way of measuring angles? One very clever way comes from the Mayan people. The classic Maya period ran roughly from 250 to 900 AD. During that time the Maya constructed hundreds of cities in an area that stretches from what is now southern Mexico across the Yucatan Peninsula to western Honduras and El Salvador, including what is now Guatemala and Belize. We learned about the right angle trick from Christopher Powell of the Maya Exploration Centre.

In a lecture during the 2011 MAA Study Tour, Powell explained that he had heard about the technique from a master builder who had learned it while a shaman apprentice. You start with a cord that has eight knots on it, dividing it into seven equal segments with a knot at each end. There are loops at each of the knots for staking to the ground.

Since the knots are evenly spaced, when knots 1 and 4 are held together and the cord pulled taut, an equilateral triangle with interior angles of 60° is formed. Then knot 6 is joined with knot 3 and the cord pulled tight resulting in another equilateral triangle formed by knots 4, 5 and 6. Finally knot 8 is joined with knot 5 forming a third equilateral triangle (and all together, half of a hexagon). If one runs a ray (or rope) from knot 1 through knot 2 and another ray from knot 1 through knot 7, the resulting angle is a right (60° + 30°) angle. The animation below (created by John C. D. Diamantopoulos) illustrates how the right angle is formed.

John C. D. Diamantopoulos also created the following video using student volunteers to demonstrate the Maya way of forming a right angle. See here for detailed instructions for how to recreate the activity with your students.

John C. D. Diamantopoulos is a Professor in the Department of Mathematics and Computer Science at Northeastern State University in Tahlequah, Oklahoma. He has been very active in the MAA, both at the section and national level. His mathematical interests include ordinary differential equations, mathematics education and history of mathematics. Diamantopoulos is also very active in his church, volunteering on computer productions/presentations and any area that needs attention.

Cynthia J. Huffman is a University Professor in the Department of Mathematics at Pittsburg State University in Pittsburg, Kansas. She has participated in all of the MAA Study Tours since 2009. Her research areas include computational commutative algebra and history of mathematics. Huffman is a handbell soloist and has a black belt in Chinese Kenpo karate.

The ancient Egyptians had a similar technique using a loop of rope with 12 equally-spaced knots and formed into a 5,4,3 right-angled triangle! Google "Rope Stretcher"