Last week we were lucky enough to attend the 100th anniversary celebration of the International Mathematical Union (IMU), which was marked with a conference entitled Mathematics without borders. The conference took place in Strasbourg, on the occasion of the IMU's 101st birthday — like so many other events, it had been planned for 2020, but was postponed due to the pandemic. With travel restrictions now eased and the pandemic situation improving, the organisers combined the best of both worlds: Mathematics without borders was an in-person event, held at the beautiful Palais Universitaire in Strasbourg, but was also streamed online for those who could not travel. 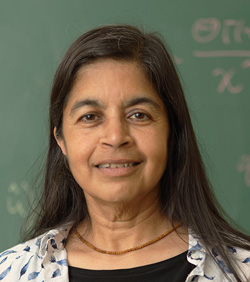 The IMU exists to promote international cooperation in mathematics. It organises the International Congress of Mathematicians and "supports other international activities that contribute to the development of mathematical science in all of its aspects — pure, applied, or educational". The emphasis is on collaboration, communication, and inclusivity.

"Mathematics is beautiful, it's done by human beings who can be incredibly creative; who I think of as artists and musicians in maths," said IMU Vice President Nalini Joshi of the University of Sydney, who joined Mathematics without borders online. "Communication is extraordinarily important for creating new ideas. International connections are essential and the IMU is a major facilitator of those connections."

As an international organisation the IMU is extremely successful, said Norbert Schappacher, of the University of Strasbourg who is the author of a forthcoming book on the IMU. "It is a real pleasure to see this IMU working with its very active committees, creating contacts and looking at mathematics, from maths education all the way to the most delicate and advanced research, in all countries of the world that care to develop mathematical culture."

This, however, has not always been the case. Schappacher's talk at Mathematics without borders traced the history of the IMU which — poignantly — was founded in the long-disputed city of Strasbourg in 1920, in the wake of WWI and following the formation of the International Research Council (IRC) in 1918. The spirit of the day was anything but inclusive: an express aim of the IRC was to keep the losing powers out of the international scientific community and profit from the war experience that had seen national research councils being formed to support the war effort. The exclusionist approach did not serve the fledgling IMU well. By 1928 it was "in agony", said Schappacher, and in 1932 it was officially liquidated.

The current incarnation of the IMU was legally born in 1952 under the leadership of the American mathematician Marshall Stone. Currently almost ninety countries hold IMU membership, spanning all continents apart from Antarctica, and inclusivity is an overarching aim. The Committee for Women in Mathematics works to narrow the gender gap, in particular by helping to establish networks of women mathematicians especially in Asia, Latin America and Africa, and the Committee for Developing Countries (CDC) supports mathematics in less advantaged regions.

For many mathematicians involved in the IMU this drive for inclusivity is inspired by personal experience. Carlos Kenig, of the University of Chicago and current IMU President, was born and raised in Argentina and recalled an undergraduate course in computer programming that was held entirely without access to computers. While some things, such as access to publications, have improved since Kenig's student days, challenges remain. "Publishing is very difficult and the community aspect of things, which is very important, is also much harder in developing countries," said Kenig.

"The CDC offers fellowship programmes for people who don't have the money to go to grad school in their own country, and gives them the opportunity to visit developed countries. There is also a visiting lecturer programme, where people in developing countries request a guest lecturer in a given topic and the IMU matches them to a volunteer. This is very important because there’s a big gap at the end of undergraduate education and the beginning of graduate education between the developing and the advanced world."

The IMU's work to support mathematics education at school level was also discussed at Mathematics without borders. The Capacity and Networking Project, part of the International Commission on Mathematical Instruction (ICMI) and a joint initiative with other international bodies including UNESCO, aims to enhance mathematics education at all levels in developing countries. The goal is to enable people to meet the challenges these countries face.

From corals to computing

For many working mathematicians the IMU simply scales up what mathematicians do naturally. "There's no better place to interact with someone else than the chalkboard," said Marcelo Viana of the Instituto de Matemática Pura e Aplicada in Brazil. "The dynamics we see in front of the chalkboard is symbolic of the way mathematicians collaborate — we have our brains and we have our friends." Project that to the scale of the planet, he says, and you have the reason for why mathematicians need an international community. 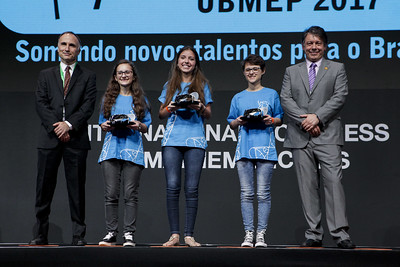 Marcelo Viana (right) with winners of the Brazilian Mathematics Olympiad at the 2018 ICM in Rio de Janeiro. Photo: Christian Rodrigues/R2/ICM 2018.

The talks at Mathematics without borders set out to present some of the latest results of those chalkboard interactions taking place around the world. While Viana reported on his work on dynamical systems, the busy programme also contained talks on new advances in algebraic topology, statistical mechanics, scientific computing, mathematical aspects of information processing, and the fractal-like growth of corals and crystals, to name just a few topics.

While these talks were of interest to mathematicians themselves, the diversity of topics also highlighted the importance of mathematics in the wider world, beyond the borders of the field. "Mathematics [is] such an important part of society — our way of thinking about things is a scientific language which is [hugely] important," said Ulrike Tillmann of the University of Oxford and President Designate of the

The International Congress of Mathematicians

The most visible activity of the IMU is probably the International Congress of Mathematicians (ICM) which takes place every four years and sees the awards of prestigious prizes including the Fields Medal. The Congress attracts several thousand participants from around the world each time and covers all areas of mathematics.

Viana, who co-organised the 2018 ICM in Rio de Janeiro, recalled his determination to involve the entire country. "I saw it as an opportunity for advertising maths," he said. "From the very beginning we thought of the Congress as an excuse to have people talk about maths, and we framed it as part of a much broader initiative, which we called the Biennial of Mathematics." Indeed the winners of the Brazilian Mathematics Olympiad, which attracts over 20 million participants every year, were awarded their gold medals by the 2018 Fields Medallists at the Congress.

The next ICM will take place in St. Petersburg in 2022. Co-organiser Stanislav Smirnov of the University of Geneva, who gave a preview of the ICM at Mathematics without borders, hopes that this will be an in-person event to help mathematicians "bounce back from the horrible zoom years." The aim, says Smirnov, is not just to create a great event for mathematicians and showcase Russian mathematical tradition, but also to help restart mathematics in Russia. "We had two troubled decades after Perestroika when much of the Russian glory disappeared," he says. "It's now [improving], we have very good students, and we hope the ICM will help to jump-start this [process]." 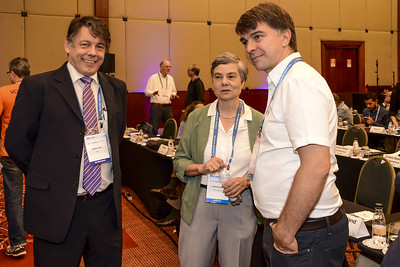 One innovation at the 2022 ICM will be the introduction of a new medal, named after Russian mathematician Olga Aleksandrovna Ladyzhenskaya, who would have turned 100 in 2022. The medal will be awarded for work in mathematical physics, an area hitherto not recognised by IMU prizes. It will also be the first to be named after a woman. Ladyzhenskaya shaped the modern theory of partial differential equations of mathematical physics and inspired extraordinary advances in areas such as quantum field theory and statistical physics. She was nominated for the 1958 Fields Medal, but did not receive it, some suspect on account of her gender. "We hope this medal will stay with us for the future," said Smirnov.

Mathematics without borders— held both in person and online, at a historic location, covering a broad range of topics, and highlighting the drive for inclusivity — encapsulated the past, present, and future of the IMU. It was a fitting celebration of its Centennial. "Over the last century the IMU has grown incredibly and has become a big enterprise with a huge international reach," said Kenig. "My hope for the future is that many more people around the world will participate in the activity of creating mathematics and producing its effects on society at large."

To find out more about next year's ICM in St. Petersburg, watch this video with Stanislav Smirnov and Andrei Okounkov, recorded at the 2018 ICM.

You can see our coverage of recent ICMs by clicking on the links below: