Maths on the brain

K.E.M. Share this page
While AI theorists argue about whether a computer could ever be intelligent, more pragmatic scientists are about to test the world's first "brain prosthesis" - a silicon chip that could take over the function of part of the human brain. 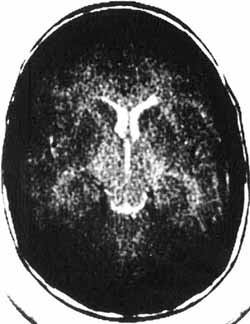 We still don't know how it works.
Image of brain scan from DHD Photo Gallery

The hippocampus has been studied intensively, because it is one of the most highly structured parts of the brain and its function is relatively easy to test. Since the mechanism by which it functions is unknown, the mathematicians modelled it by stimulating slices of rat hippocampus with electrical impulses, and recording the responses. After stimulating each slice literally millions of times, they compiled the information from all the slices about which "input" produced which "output", building up a model for the entire hippocampus. The next challenge was to build a silicon chip which produced the same outputs in reponse to the same inputs.

This reductionist, "black-box" approach to model-building presented a formidable challenge to the team from the Department of Biomedical Engineering at the University of South California. Cross-correlating the information gained from testing different slices, and dealing with the highly nonlinear behaviour of the hippocampus, were just two of the problems they had to overcome. But the trail they are blazing could lead to hope for patients with Alzheimer's disease and other brain damage. It remains to be seen whether their noble aims will be enough to quash the doubts of those who fear that technology is bring us ever closer to a science-fiction-style dystopia.