Maths in a minute: Triangular numbers

A triangular number is a number that can be represented by a pattern of dots arranged in an equilateral triangle with the same number of dots on each side.

You can see that each triangle comes from the one before by adding a row of dots on the bottom which has one more dot than the previous bottom row. This means that the

There’s also another way we can calculate the

triangular number and arrange them so that they form a rectangular dot pattern. 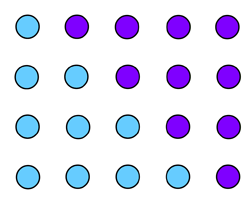 This rectangular pattern will have

dots on the shorter side and

dots on the longer side, which means that the rectangular pattern contains

dots in total. And since the original triangular dot pattern constitutes exactly half of the rectangular pattern, we know that the

triangular numbers to form a square which has

dots to a side: 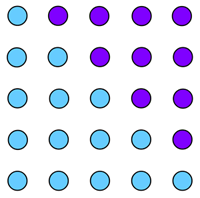 Alternatively, you can see this using the formulas for the consecutive triangular numbers

Triangular numbers also come up in real life. For example, a network of

connections. And if in sports you are playing a round robin tournament, in which each team plays each other team exactly once, then the number of matches you need for

These two results are equivalent to the handshake problem we have explored on Plus before.

We would like to thank Zoheir Barka who sent us the first draft of this article. We will publish a lovely article by Barka about triangular numbers soon. In the mean time, you can read Barka's article about beautiful patterns in multiplication tables here.