Maths in a Minute: Turbulence and the Reynolds number

If you've ever observed a mountain stream you know that it can change its behaviour quite dramatically over time. At some times of the year it'll flow along smoothly and calmly, but at others it'll turn into a raging, turbulent mass of water. 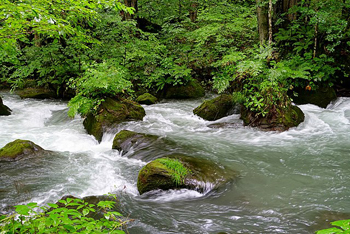 The transition between these two behaviours is linked to the Reynolds number, a quantity that can be associated to any fluid flow, be it water, blood, honey, or gases such as air. Imagine such a fluid flowing smoothly down a tube and think of the factors that might cause that flow to become turbulent. One factor that immediately springs to mind is the speed of the flow: as you increase that speed turbulence will eventually set in.

Another factor is what you might intuitively think of as the thickness of the fluid: it's harder to force a stream of honey to become turbulent than a stream of water, which in turn won't become turbulent as easily a flow of air. Formally, this notion of thickness is measured by a fluid's viscosity, which you can also think of as fluid's natural ability to resist being deformed.

The diameter of the tube the fluid is flowing through also impacts on the nature of the flow. A turbulent flow through a tube can be calmed down by putting a nozzle at the end of it, forcing the fluid to enter a narrower tube. Conversely, a calm and steady laminar flow can become turbulent if the tube suddenly widens. The larger the diameter of the tube, the easier it is for turbulence to happen, all other things being equal.

Finally, the density of the fluid — its mass per unit volume — also plays a role. The flow of a fluid with a high density (loosely speaking, a "heavy" fluid) will display turbulence more easily than the flow of a fluid of lower density, again all other things being equal.

Osborne Reynolds, who experimented with fluids flowing down pipes in the 1880s, realised that it isn't the absolute values of these four quantities that matter, but their relationship. If the fluid's speed and density and the diameter of the tube combined are sufficiently large to overwhelm the fluid's viscosity, then the fluid flow will be turbulent. If on the other hand viscosity is sufficiently large compared to the combination of speed, density and diameter, then the flow will be laminar, that is calm and smooth.

The Reynolds number captures this. It is defined as

is the density of the fluid,

the diameter of the tube, and

Experiments have shown that if the Reynolds number of a flow is less than 2300, the the flow is laminar, no matter what fluid is involved. If its greater than 2900, then the flow is turbulent. In between these two values you get intermittent behaviour — see Wikipedia to find out more.

The definition of the Reynolds number can be adapted so it works, not only when a fluid flows down a tube, but also when air flows around an airplane's wing, or water down an open channel, etc. It's of huge importance in engineering, where the aim, more often than not, is to avoid turbulence.

To find out more about the maths of turbulence see this package of articles.