Met Office in for another roasting?

Autumn is upon us, and as every year we're anxiously pondering what winter might have in store. According to the Met Office's tentative forecast based on early indications, we're in for a milder winter than last year, with rainfall at or above average. A more definitive forecast is due out in November, but it wouldn't be surprising if the people at the Met Office were a tad nervous about putting their necks out once again. Their April forecast, stating that the UK was "odds-on for a barbecue summer", sent British tempers flaring when July turned out to be one of the wettest on record. In response to the miserable weather, and mounting criticism, the Met Office revealed in August that its earlier optimism had been based on a 65% probability of a hot dry summer, and insisted that it had explained at the time that this forecast did "not rule out the chances of seeing some heavy downpours at times". Too right, you might say, since the overall rainfall for summer 2009 turned out to be 40% above the historical average. 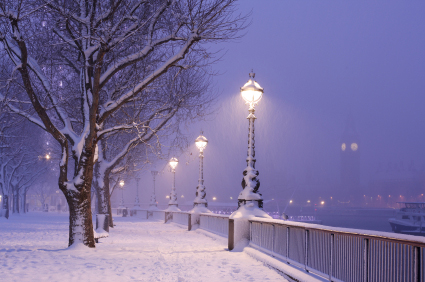 The Met Office's tentative forecast predicts a milder winter than last year, when snow brought the UK to a stand still.

To be fair, the Met's barbecue debacle was down to a failure to communicate its predictions clearly, rather than predictive incompetence. Seasonal forecasts use the same numerical weather prediction models as those used to produce daily forecasts, but also include ocean conditions, which can influence long-term weather. But instead of just running the models 24 hours ahead of current weather conditions, meteorologists run them for several months, to simulate the weather over the whole of the three month season. They don't claim to predict the weather conditions for every day over the next three months. Instead, the average rainfall and temperature over the summer are calculated from the simulated data.

But the weather is a complex system, and the models can give very different predictions for just slightly different starting conditions, particularly when looking over longer periods of time. To account for this effect, and also for other inaccuracies in the model, the Met Office uses a technique called ensemble forecasting. Instead of just running the weather models once to produce a single prediction of the weather over the summer period, the models are run many times, each time with slightly different starting conditions. This produces an ensemble of forecasts for the period, each member of the ensemble representing a possible summer.

Comparing the data for June, July and August this year, the prediction of above average temperatures was just about correct: the average temperature was 14.7°C for the three months, 0.6°C higher than the historical average of 14.1°C. However, as most of us realised as we got drenched, rainfall did not follow the prediction, and ended up 40% above the historical average.

So it turned out that our summer was more like some of the other 35% of the members of the Met's original ensemble — soggy, but average in terms of temperature. When you realise that over a third of the forecasts did not predict a barbecue summer, the weather we have had seems slightly less surprising. The excessive rainfall would have been far more shocking if the seasonal forecast had given a 90% probability of a dry hot summer, rather than the lower 65% probability. The Met Office does not include the probability estimates in the published seasonal forecasts, and instead only announces the likeliest outcomes. The original estimate of a 65% probability was only quoted in the updated summer forecast.

We all know that weather prediction, though incredibly sophisticated and advanced, is an inexact science. Perhaps if the Met Office published the probabilities underlying its forecasts, it might get a more rational response to disappointing weather. Then we might recognise that any future predictions of a barbecue summer are just that, predictions, not certainties. And we can always look out the window to see if it's a good day to throw the snaggers on the barbie.