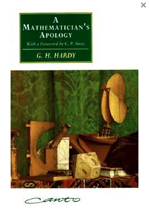 This is an old book. First published in 1940, it's a lot older than the books we normally review in this section. The film The man who knew infinity made me want to re-read it (something that can be done in a couple of hours) and it's been worth it. Within the rich, and often brilliant offering of popular books on mathematics that's available today, Hardy's austere and succinct essay still stands out. I'd recommend it to anyone who'd like to take a peek into the mysterious minds of pure mathematicians and learn about their view on a subject that's so often misunderstood.

In the wider world G. H. Hardy (1877 - 1947) is famous (largely due to the above film) for his fascinating collaboration with the Indian mathematician Srinivasa Ramanujan. Within mathematical circles he's well-known for his contributions to number theory and mathematical analysis, many of them produced with John Littlewood.

A mathematician's apology is an attempt to justify, and explain, pure mathematics. On Wikipedia it's described as an essay on the aesthetics of mathematics and that's certainly partly true. Perhaps the most famous quote from the essay beautifully expounds Hardy's view of maths as a creative art, and I suspect it rings true with many mathematicians:

"A mathematician, like a painter or poet, is a maker of patterns. If his patterns are more permanent than theirs, it is because they are made with ideas. [...] The mathematician's patterns, like the painter's or the poet's must be beautiful; the ideas like the colours or the words, must fit together in a harmonious way. Beauty is the first test: there is no permanent place in the world for ugly mathematics."

But beauty is only part of the picture. In what's to me the most fascinating part of the essay Hardy tries to pin down what defines a truly great mathematical result. He states and proves two theorems as examples, carefully chosen to be accessible to non-mathematicians: the fact that there are infinitely many prime numbers, and the fact that the square root of 2 is irrational (both due to the ancient Greeks). He points to the sense of unshakeable truth and permanence in both of these results ("two thousand years have not written a wrinkle on either of them") and their far-reaching significance within mathematics: one concerns the prime numbers, which are the atoms from which arithmetic is built, and the other shows that there is a mathematical world beyond the arithmetic of the whole numbers. The permanence is what distinguishes maths among other fields, and their fundamental nature is what distinguishes these two results among others within maths.

More generally, Hardy tries to define what makes a result significant. It's slippery territory, but Hardy points to a combination of generality and depth. The ideas within a result (and its proof) should be useful in many different constructs of mathematics and the "relations revealed by the proof" should connect many mathematical ideas. He beautifully describes how maths appears to be made of different "strata", with basic ideas (eg the whole numbers) sitting on top of more involved ones (eg the irrational numbers). A result is deep if it cuts right through to the lower strata.

The beauty of a result is intimately linked with its significance. For example, the fact that 8712 is a multiple of its reversal (8712 = 4 x 2178) is cute, but nobody would describe the result as significant or beautiful: it just isn't important enough. But there's also a purely aesthetic aspect to a proof. In both of his examples, as Hardy puts it,

"There is a very high degree of unexpectedness, combined with inevitability and economy. The arguments take so odd and surprising a form; the weapons used so childishly simple when compared with the far-reaching results; but there is no escape from the conclusions. There are no complications of detail [...]. A mathematical proof should resemble a simple and clear-cut constellation, not a scattered cluster in the Milky Way."

Apart from its analysis of mathematical beauty, Hardy's essay is famous for its look at the usefulness of mathematics, or rather the lack thereof. Hardy believes that those aspects of maths that serve as tools for engineers and other applied scientists are precisely the boring ones. Real maths, according to Hardy, is "almost wholly useless". He makes some surprising points, for example that maths is in "more direct contact with reality" than physics, and that "pure mathematics is on the whole distinctly more useful than applied". I'll leave it up to you to find out how he argues those points.

It's more tempting to see whether his predictions of what maths is useful and what isn't still hold true. Quantum mechanics and general relativity are perhaps the most striking examples of these predictions that don't hold true. Hardy counts its originators as "real" mathematicians and claims that these areas of theoretical physics are almost as useless as number theory. They were in his time, but they're not now. New technologies use both quantum mechanics (eg the internet) and relativity (eg GPS). Even the number theoretical result on the infinitude of primes could be argued, admittedly with a considerable stretch, to find applications in cryptography, which makes use of very large primes. But Hardy himself admits that time may change his assertions. And what's undoubtedly clear is that pure mathematicians, and even theoretical physicists, aren't motivated by practical applications when practicing their art.

While it's a joy to read, there's also quite a lot to offend in Hardy's essay. It's implicitly sexist and Oxbridge-centric — it's a product of its time in this sense. There's a certain flavour of misanthropy ("most people can do nothing at all well") and arrogance ("is not the position of an ordinary applied mathematician a little pathetic?"). As an apology it's most unapologetic. But as Hardy himself points out, his essay really is an auto-biographical apology, an attempt to justify his own life's work, and thereby unflinchingly subjective. Yet, this subjective view of mathematics is probably shared by a good part of pure mathematicians, which is what makes the essay interesting: it gives a real glimpse of what pure mathematics is about. Whether you're just curious about the subject, a maths student, or a mathematician yourself, it's well worth reading.

As for Hardy's view on his own work, you won't be surprised to hear that he considers his life as a mathematician well spent. But not without humility:

"I have never done anything 'useful'. [...] Judged by all practical standards, the value of my mathematical life is nil; and outside mathematics it is trivial anyhow. I have just one chance of escaping a verdict of complete triviality, that I may be judged to have created something worth creating."

Book details:
There are several editions of this book. The cover above is from the following:
A mathematician's apology
G. H. Hardy
paperback — 153 pages
Cambridge University Press (1992)
ISBN: 978-0521427067