Maths in a minute: The square root of 2 is irrational 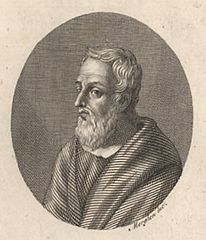 The proof of the irrationality of root 2 is often attributed to Hippasus of Metapontum, a member of the Pythagorean cult. He is said to have been murdered for his discovery (though historical evidence is rather murky) as the Pythagoreans didn't like the idea of irrational numbers.

Here’s one of the most elegant proofs in the history of maths. It shows that

is an irrational number, in other words, that it cannot be written as a fraction

We start by assuming that

can be written as a fraction

have no common factor — if they did, we could simply cancel it out. In symbols,

is an even number: it’s a multiple of

is an even number, then so is

(you can check for yourself that the square of an odd number is odd). This means that

for some other whole number

is even, which again means that

is even. But then, both

are even, which contradicts the assumption that they contain no common factor: if they are both even, then they have a common factor of

. This contradiction implies that our original assumption, that

can be written as a fraction

must be false. Therefore,

Read more about...
Maths in a minute
irrational number

There's a shorter proof which requires unique factorization of integers, while ignoring the assumption that a and b have no common factors.

That's the problem though: the proof through unique factorisation assumes the Fundamental Theorem of Arithmetic, which needs to be built from the ground up first. Either way, the irrationality of root 2 is a great piece of mathematics both for us and the ancient humans.

But the Euclid proof also depends on the Unique factorization Theorem, otherwise it would not be possible to decide whether a/b was in its lowest form

Not really, you only have to indicate at the beginning of the proof that the numbers a, b they are not both even, otherwise you should simplify by dividing each one by 2

Even after dividing by 2, both a and b may still be even! You need mathematical Induction to select the least a( or least b) such that a- square divided by b- square is two.