Not just knots: the secrets of khipu 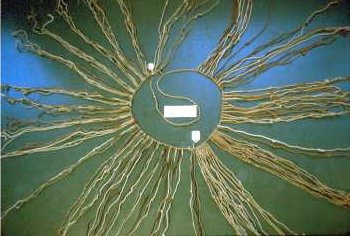 A khipu from the Museum fü r Vö lkerkunde in Berlin, Germany, photographed by Gary Urton.

While physicists grapple with modern string theory and mathematicians get their brains in a twist over the theory of knots, anthropologists are trying to decipher another, quite ancient, set of knots and strings: those found on an Inka khipu.

The Inka flourished in what is now Peru between 1438 and 1533, when Spanish colonialists killed their last ruler and destroyed their empire. With its impressive architecture, highly developed arts and crafts and an extensive administrative system, the Inka Empire, or Tawantinsuyu, possessed all the hallmarks of a fully-fledged civilisation. All but one that is: it seems that the Inka lacked a writing system.

To keep track of taxes, conduct censi, or perform accounting tasks, the Inka used khipu. A khipu is a set of strings in various colours, each attached to a common horizontal string, and each embellished with a series of knots. With three different types of knots and various colours and ways of positioning the strings, there is a lot of scope for conveying information with a khipu, and the Spanish invaders were quick to suppress their use. Today, only 600 or so khipu survive, and the knowledge of how exactly they were used has been lost.

The first step towards regaining some of that knowledge came in the 1920's, when the amateur Leland L. Locke noticed that clusters of knots could be read as numbers. A few decades later, in the 1970's and 1980's, the mathematician-anthropologists Marcia and Robert Ascher carefully sifted through hundreds of khipu and found that the numerical interpretation made sense: it showed up patterns that seemed to disguise arithmetical operations. The numerical value of one khipu string, for example, might be exactly the sum of the preceding ones.

But how did the Inka keep track of what they were counting? Isn't it reasonable to assume that some of the numerical knot combinations also stand for words? After all, we use numerical postcodes to identify places, and the most poetic email message is translated by a computer into a sober string of 0's and 1's. If there is more behind the numbers, then the khipu system may be regarded as an attempt at a written language, and the khipu may hold as yet unknown secrets of the Inka civilisation. 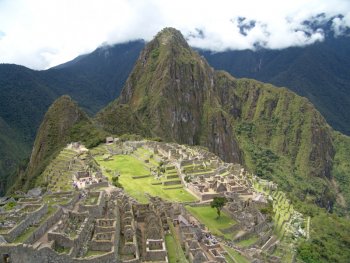 To answer questions like these, archaeologists Gary Urton and Carrie Brezine from Harvard University analysed 21 khipu that were found under a floor of a house in the Inka administrative centre of Puruchuco. Brezine, who is also a mathematician, set up a computer database recording the tiniest bit of information from each khipu. Mathematical software, which can keep track of the most tangled web of comparison and cross-referencing, helped to spot patterns and relationships that paint a clear picture of the Inka administration system.

A good example of how the khipu in question may have been used is the Inka tax system. Tax was not paid in money, but in labour. At a local level, labourers were organised into groups of ten under the authority of a Chunka Kamayoq. Five groups of 10 were overseen by a Pichqa-Chunka Kuraka, or "lord of 50", and two groups of 50 were led by a Pachaka Kuraka, or "lord of 100". This structure continued all the way to the top, where four lords were directly answerable to the king.

The researchers spotted that seven of their khipu could be organised into a hierarchy of three levels. The lowest level khipu may have been used, for example, to keep track of tax payers' labour at a local level, and the highest level may have been used by a regional or provincial administrator. Khipu at the same level are very similar, suggesting that the Inka were conscientious accountants, keeping duplicates of their records.

Each lower level khipu corresponds to a section of the khipu directly above it. Numerical values of certain strings of the same colour in the lower level khipu add up, with only minor discrepancies, to the value of a correspondingly coloured string in the higher level khipu. It seems that in a khipu at a given level all the information of the levels below it was merged, and in this way information could be passed on through the hierarchy.

But the researchers also found that some of the clusters of knots may stand for more than just numbers. Each khipu at the two top-most levels bears an introductory sequence of strings that does not seem to relate to the khipu below it. And these introductory sequences all contain arrangements of three figure-eight knots tied onto three separate strings. Did these arrangements serve to identify what was being counted, or maybe where it was counted? The researchers think that the latter may have been the case, and that this combination of knots identified the province of Puruchuco where all the 21 khipu were found. This explains why the lower level khipu do not bear these introductory segments: they did not need this identifier, as they were only passed around locally.

If this assumption is correct, then the three figure-eight knots form the first example of a "written" Inka word. Maybe more such words will emerge as scientists study all the surviving khipu with Bezine's database system, and a little more of the khipu secret will be revealed.