How big is the Milky Way?

A photograph of part of the Milky Way, courtesy of NASA

All objects attract each other and when we look up at a (clear) night sky we see many massive stars all exerting forces on each other. A question which has been vexing astronomers for a long time is whether these forces of attraction between stars and galaxies will eventually result in the universe collapsing back into a single point, or whether it will expand forever with the distances between stars and galaxies growing ever larger. The answer to this question turns out to depend on how much matter the universe contains: the more matter, the more attraction and the more likely the "collapse" theory.

We all think of a line segment as being one-dimensional, a square two-dimensional and a cube three-dimensional, but what does this really mean? Intuitively, the dimension of an object should measure how well it fills space, how "wriggly" it is: the problem is to turn this intuitive idea into a mathematical definition.

In order to reduce problems with visualising what is happening, we consider objects sitting in the plane. We begin by looking at a line and a square more closely.

Finding the box dimension of a line segment

If we tabulate the results we find the following:

required to cover the line segment, then

Now consider a square. This is something which we would expect to be two dimensional. Again, if we split the plane up into squares of the same side lengths r and count how many hit our square, what do we find? In the figure below we have divided the plane up into boxes of side lengths, 1, 1/2, 1/4 and 1/8, and counted how many of the boxes hit (or intersect) a particular line segment.

Finding the box dimension of a square

required to cover the square, then Thus for these examples we find that when

is very small, then the number of boxes of side length

required to cover the set is roughly

to the power of the dimension. This suggests that we make the following definition:

The (box) dimension of a set

such that the number of boxes of side length

Now let us consider something a little more complicated, a set which is somewhere between being a line and a square in that its dimension will turn out to be between one and two.

We construct it as follows:

We start with a square of side-length 1, and we split it into 9 smaller subsquares of side-lengths 1/3. We then keep the four corner subsquares and throw the rest away. For each of these four squares we then repeat the process: we divide each up into 9 smaller squares of side-lengths 1/9 and keep only the four corner squares of these new squares. We repeat this process forever..., and in the end obtain the object illustrated below. This sort of set is known as a Cantor Dust and is named after the German mathematician Georg Cantor, who was one of the pioneers of modern mathematical analysis.

, then we need exactly

boxes to cover the set. Hence and we can calculate that

The box dimension of our photo of the Milky Way

Now we'll look at the photo at the beginning of this article, and use it to try to estimate the box dimension of the Milky Way.

We begin by modifying the photo to create an image which is amenable to analysis: calculations of box dimension require a completely black and white image - no greyscale is allowed. We do this by first inverting the greyscale so that the stars are black and the empty space is white. We then convert the picture to a black and white image, by making anything above a certain level of grey, black, and colouring the remainder, white, as above. There is a certain amount of freedom as to the choices we make here and we shall need to consider how this affects the accuracy of our results later on.

Changing greyscale to black and white

We now divide the picture up into a grid of squares (of side length r, say) and count how many contain any black parts of the image. We do this for grids if various sizes and record the results. There are many computer programs which can do this rather tedious work for us and I used the Fractal Dimension Calculator to find the counts for boxes of various sizes. The table below shows the number of boxes of various sizes required to cover the stars in our photo. The size of a box is given as a fraction of the image's height.

If, as we expect, for (small) boxes of side-length

of both sides, we find that

Hence, if we plot 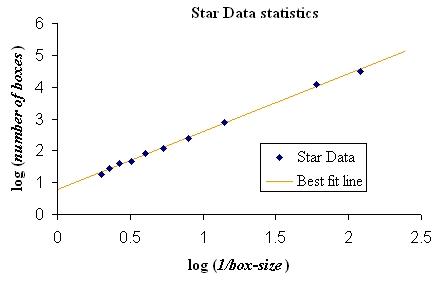 In a photograph, the distances between various stars are distorted and it is also very likely that some stars which are in the Milky Way are not visible on the photo. Thus we expect the photo to show us less than is actually there. Hence any estimate we make of the dimension is likely to be too small. The question is whether we can say anything sensible about what the error is likely to be. 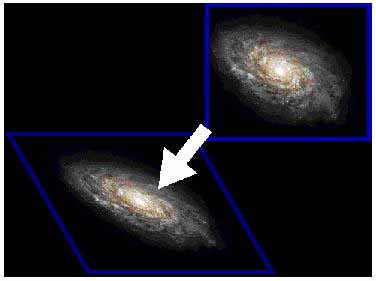 Our photo of the Milky Way is a projection, not an accurate representation

in space, and a projection

of it, we could find a relationship between their dimensions.

If we draw a grid of boxes over

and then look at the corresponding grid on the projection of

, see the figure below. (We are ignoring the fact that the projected boxes may be distorted - when the argument is done more carefully, it turns out that this doesn’t matter.)

Thus and so and hence if

It is always possible that the photo we have of the Milky Way is taken from a very special direction where there is a lot of overlapping, see the figure below.

In the projection to the right, there is an exceptional amount of overlapping. The projection downwards has less.

However, we would expect that if our photograph of the Milky Way is taken from a typical position, then we would not get an exceptional amount of overlap. Our problem is how to measure how much overlap we typically get. Fortunately for us, a very recent result by John Howroyd (a mathematician at Goldsmiths College in London) tells us what to expect. He showed that for the projection from space onto a typical plane of an object,

, then the box dimension of the projection,

If we rearrange this in order to estimate

, then we find that

which simplifies to give

Our analysis suggests that the dimension of the Milky Way is between 1.82 and 2.6. However there are many potential problems with our approach which may mean these estimates are meaningless! Here are a few of them (you may be able to find others):

Despite these problems, though, the method does give us some insight into the distribution of matter in the Milky Way. Many of these problems can be overcome and the only one which will always be present, no matter the problem under investigation, is the fact that the calculation of box dimension requires us to look at what happens as the boxes used become arbitrarily small. In practice, this is impossible, and it is a matter of judgement as to whether one has enough data to make a sensible calculation.

For many stars, we also know how far away from us they are, and you may wonder whether it is possible to use this information to get better estimates on the dimension. Of course from our viewpoint on Earth, there will be many stars we can't see, and it is unknown if this extra information does enable better estimates to be made.

Toby O'Neil is a Lecturer in Analysis at the Department of Pure Mathematics of the Open University, and when he's not busy counting boxes, he likes to spend his time staring vacantly into space.