Outer space: A sense of proportion 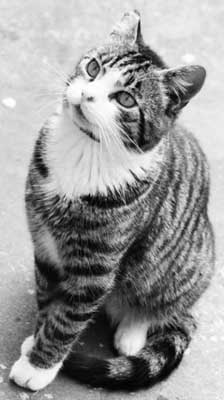 not as strong as she looks. Image DHD Photo Gallery

As you get bigger, you get stronger. We see all sorts of examples of the growth of strength with size in the world around us. A small kitten can hold its spiky little tail bolt upright yet its much bigger mother cannot: her tail bends over under its own weight. The superior strength of heavier boxers, wrestlers, and weightlifters is acknowledged by the need to grade competitions by the weight of the participants. But how fast does their strength grow with weight or size?

Simple examples can be very illuminating. Take a thin breadstick and snap it in half. Now do the same with a much longer one. If you grasped it at the same distance from the snapping point each time you will find that it is no harder to break the long stick than to break the short one. A little reflection shows why this should be so. The stick breaks along a slice through the breadstick. All the action happens there: a thin sheet of molecular bonds in the bread are broken and the bread breaks. The rest of the breadstick is irrelevant. If it was a hundred metres long it wouldn't make it any harder to break that thin sheet of bonds at one point along its length. The strength of the breadstick is given by the number of molecular bonds that have to be broken across its cross-sectional area. The bigger that area, the more bonds that need to be broken and the stronger the breadstick. So strength is proportional to cross-sectional area, which is proportional to some measure of its average size squared.

This simple rule of thumb allows us to understand all sorts of things. The ratio of strength to weight is seen to fall as

So as you grow bigger your strength does not keep pace with your increasing weight. If you expanded uniformly in size, you would eventually be too heavy for your bones to support and you would break. This is why there is a maximum size for land-going structures made of atoms and molecules, whether they are dinosaurs, trees, or buildings. Scale them up in shape and size and eventually they will grow so big that their weight is sufficient to break the molecular bonds at their base.

We started by mentioning some sports events where the advantage of size and weight is so dramatic that competitors are divided into different classes according to their bodyweight. Our "law" (the first equation above) predicts that we should expect to find a straight line when we plot the cube of the weight lifted against the square of the bodyweight of weightlifters. Here is what happens when you plot that graph for the current men's world-records in the clean and jerk across the weight categories! Sometimes mathematics can make life simple. Can you use the graph to determine who is the strongest weightlifter of all?

Did you manage to answer the puzzle posed in Outer space: Relationships? If not, you can find the answer here!