Mysterious stocking filler for US physicists 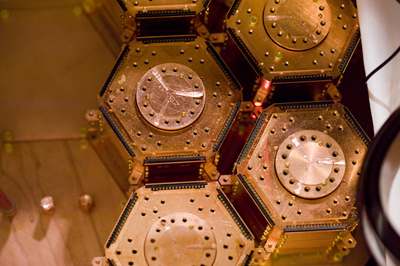 Physicists have come up with the notion of dark matter because the amount of ordinary matter observed in the Universe isn't enough to explain the way stars and galaxies move. "In our Solar System, there is a fine balance between the tendency of gravity to make the planets fall towards the Sun, and the centrifugal effect of the orbital motions," said Martin Rees, Astronomer Royal and Professor of Cosmology and Astrophysics at the University of Cambridge. "Likewise, on the far larger scale of an entire galaxy, there is a balance between gravity, which tends to pull everything together into the centre, and the disruptive effects of motion, which, if gravity didn't act, would make its constituent stars disperse."

According to Einstein, gravity is a result of massive objects bending the fabric of spacetime, so the observed motion of stars and galaxies gives an indication of how much matter there should be in the Universe — and it turns out that there must be much more than the ordinary matter we can detect. "Dark matter is inferred to exist because the observed motions are surprisingly fast," said Rees, "Too fast to be balanced just by the gravity of the stars and gas that we see." (See Plus articles What is dark matter? and How does gravity work?.)

No-one knows exactly what dark matter is made of, but theoretical considerations point to hypothetical particles known as WIMPs (weakly interacting massive particles). As their name suggests, WIMPs are believed to be suitably massive — with masses comparable to, or even heavier than, the masses of atomic nuclei — but they rarely interact with other particles, usually just whizzing through any material they encounter. However, a tiny proportion of WIMPs will occasionally bounce off the nuclei of other atoms like billiard balls. These interaction should leave traces of energy that can be detected in the lab under the right conditions.

The CDMS experiment seeks to create exactly these conditions, using 30 detectors made from two ultra-pure materials, germanium and silicon, cooled to temperatures near absolute zero. The tiny amounts of energy deposited in the crystalline materials by WIMP-like interactions can be detected by special sensors and then amplified to be analysed on computers. The results revealed last week came from the analysis of data that had been collected by the detectors in 2007 and 2008. 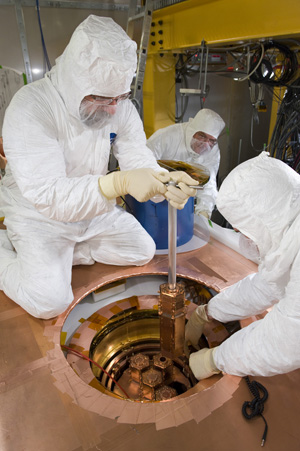 However, detecting WIMP-like interactions was just one part of the CDMS researchers' problem. The other was to make sure that these interactions did not come from other particles, for example particles arising from radioactive decay or arriving on Earth in cosmic rays. The thick layers of rock and other materials above the detectors help to shield them from cosmic rays, and the detectors themselves can to some extent tell potential WIMP interactions from background interference. CDMS researchers did in fact spend years to make sure that background interactions were suppressed to sufficiently low levels, creating a situation where they could expect to detect only one WIMP interaction per year.

But with such sensitive measurements researchers also needed to be sure to exclude any data that was taken when the detectors were not in perfect working order. To test the performance of their detectors, the researchers frequently bombarded them with two kinds of radiation. One kind consisted of gamma rays and represented the most frequent source of normal matter background, and the other consisted of neutrons, which like WIMPs can collide billiard-style with germanium nuclei, and were used to mimic WIMP interactions. These tests indicated how well a WIMP-like signal would stand out from background interactions. They showed that two thirds of the data that might have contained WIMP interactions contained too many background interactions to give definite information, and so this part of the data set was discarded.

Only after the potentially misleading data had thus been filtered out, and researchers had a clear estimate of how much background interference there is likely to have been, did they "open the box" of their remaining data set — and it turned out to contain two interactions consistent with predicted WIMP behaviour. There still is a one in four chance that both of these were in fact background interactions, so researchers cannot claim that they have definitely found dark matter. But the results indicate that their experiments are worth pursuing. "This is a very intriguing result," said Lauren Hsu, a CDMS researcher at Fermilab. "We really don't know if this is a background or a signal. As an experimenter you always wish you had more data. I'm really interested to see what our next results will be."

And luckily, greater certainty is on the horizon. "In 2010, the collaboration is installing an upgraded detector (SuperCDMS) at Soudan with three times the mass and lower backgrounds than the present detectors," says Pier Oddone, director of Fermilab. "If these two events are indeed a dark matter signal, then the upgraded detector will be able to tell us definitively that we have found a dark matter particle."

You can find out more about the recent results on the CDMS website and the Fermilab website.