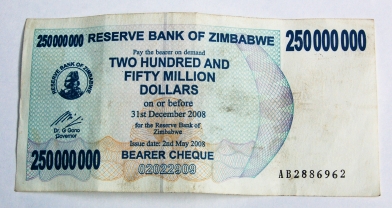 Two hundred fifty million Zimbabwean dollars: in July 2008 these bought you less than 1% of an egg.

In these economically testing times we are increasingly familiar with price indices as measures of the rising cost of living. A typical measure will take the average of a "basket" of typical costs — a loaf of bread, a kilogram of meat, a pint of milk, a gallon of petrol, etc — and take an average of these, then do the same next month, or next year, so as to monitor how (or if) the cost of living is rising. This gives a measure of inflation. Of course, just because the index is rising, life need not get more expensive for you. If the price of fish rises sharply, but meat doesn't change, then you could replace fish with meat in your diet and avoid a rise in the cost of living.

Taking the average of all the prices in the "basket" can be done in different ways. The simplest average we are familiar with is the arithmetic mean (AM). If we have

then the arithmetic mean is formed by adding the prices together and dividing by their total number:

But we might also measure the geometric mean (GM) of

root of the products of the prices: When there are just two quantities to average, so

can never be negative, we see that And in fact this is true for any value of

: the arithmetic mean is never smaller than the geometric mean; they are only equal when all the prices,

Suppose our basket consists of three items — whole milk, beef mince and super unleaded petrol — and that the national average prices in August 2008 and August 2007 were:

The ratio of the arithmetic means for both years is

Adding the units together does not make sense, so we are stuck and can't simplify this ratio further. The ratio of the geometric means is In this case the units cancel to give

The second is practical. To determine the inflation level, you compare the index at different times. If you were using the arithmetic mean, then you would need to work out AM(2008)/AM(2007) to find out how much it increased over the last year. But AM is the sum of all sorts of different things that can be measured in different units: Pounds Sterling per kilogram, Pounds Sterling per litre, etc; some involve price per unit weight, some price per unit volume. In order to calculate AM you have to add them together and this doesn't make any sense if the units of the ingredients (the p's) are different. By contrast, the beautiful feature of using the geometric mean is that you can use any units you like for each of the p's because when you form the division GM(2008)/GM(2007) to find the inflation factor, all the units cancel out because they are multiplied in the same way in the denominator as in the numerator. So means can be pretty when life is pricey.