Outer space: Is this a record? 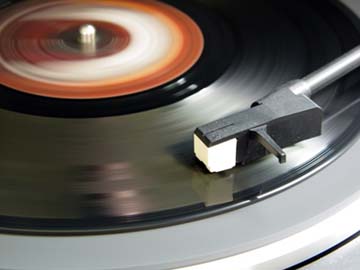 Records. Remember those discs of black vinyl that your parents owned that made a noise when spun at high speed? Well, mathematicians are more interested in the other sort of records: the biggest, the smallest and the tallest. Are they predictable in any way?

At first you might think not. True, they follow a trend of getting "better" - they wouldn't be records if they didn't - but how could you predict whether a Michael Johnson or an Ian Thorpe was going to come along and break record after record? Amazingly, the women's world record in the pole vault was broken on eight separate occasions by Yelena Isinbayeva in the last year alone.

In a very important sense, records like this are not random. Each new record is the result of a competitive effort that is not independent of all the previous attempts at the same feat. Pole vaulters learn new points of technique and continually train to improve their weaknesses and refine their technique. All you can predict about records like this is that they will be set again, eventually, although there might be a very long wait for the next one.

But there are different sorts of records that arise in sequences of events that are assumed to be independent of each other. Good examples are record monthly rainfalls, record high or low temperatures in one place over hundreds of years, or the heights of the record highest tides. The assumption that each event is independent of its predecessors is very powerful, and allows us to make a striking prediction about how likely it is that there will be a record - irrespective of what the record is for. It could be rain, snow, fall of leaves, water levels, wind speeds or temperature.

Let's pick annual rainfall in the UK as our example. In the first year that we keep records the rainfall must be a record. In year two, if the rainfall is independent of what it was in year 1 then it has a chance of 1/2 of being a record by beating the year 1 rainfall and a chance of 1/2 of not beating the year 1 rainfall. So the number of record years we expect in the first two years is 1+1/2. In year 3 there are just two ways in which the six possible rankings (ie 1 in 3) of the rainfall in years 1, 2 and 3 could produce a record in year 3. So the expected number of record years after 3 years of record keeping is 1+1/2+1/3.

If you keep on going, applying the same reasoning to each new year, you will find that after n independent years the expected number of record years is the sum of a series of n fractions:

What does this tell us? Suppose that we were to apply our formula to the rainfall records for some place in the UK from 1748 to 2004 - a period of 256 years. Then we predict that we should find only H(256) = 6.124, or about 6 record years. We would have to wait for more than a thousand years to have a good chance of finding even 8 record years. Records are very rare events if they occur at random.

Take a look at the data sequences shown in the weather charts at at Roehampton's website (this will open a new browser window). We can easily count the number of record years by just noting where the graph reaches a new maximum peak. Incidentally, our arithmetic applies to record lows as well and you can count the number of years which set a new record low rainfall. The result is very close to our prediction in both cases.

In the recent past there has been growing concern around the world about the evidence for systematic changes in climate - so-called "global warming" - and we have noticed an uncomfortably large number of record rainfalls, Caribbean hurricanes and other climatic extremes in different places. If new records become commoner than the harmonic series predicts they should be then this is telling us that annual climatic events are no longer independent annual events but are beginning to form part of a systematic trend. Why don't you see if you can track down data for your local weather in recent years to see if the monthly extremes follow the harmonic pattern or not?

Records seem to be coming back into fashion.

Did you manage to answer the puzzle posed in Outer space: Two's company, three's a crowd? If not, you can find the answer here!