The hopeless prisoner is incarcerated in a dark, dank, forgotten cell. The days, months, and years are passing slowly. There are many more to come. The scene is familiar — at least from the movies. But there is usually an interesting mathematical sub-text. The prisoner has often been keeping track of the days by systems of marks on the cell wall. Nor is there anything novel about this human tendency. The oldest human artefacts with records of counting in Europe and Africa go back more than 30,000 years and show similar elaborate groups of tally marks following the days of the month and the accompanying phases of the Moon.

The standard European pattern of tallying goes back to finger counting and results in sets of 4 vertical(ish) lines being completed by a cross slash to signal a score of five.

On to the next set of five, and so on. The vertical bars denoting each counted item show ways of counting that predate our formal counting systems and led to the adoption of the Roman numerals, I, II and III or the simple Chinese rod numeral systems. They are closely linked to simple methods of finger counting and make use of groups of 5 and 10 as bases for the accumulated sets of marks. 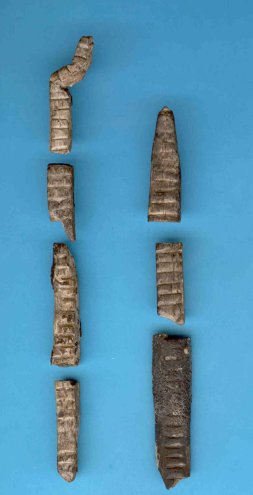 Ancient tallying systems recorded marks on bone or notches carved in wood. Numbers of single notches recorded the first few but a half cross notch V was then used to mark the 5, with a complete one X for the ten, hence the Roman V and X; the number four was made either by addition as IIII, or by subtraction as IV.

Tallying remained serious business in England until as late as 1826, as the Treasury used great wooden tally sticks to keep records of large sums entering and leaving the Exchequer. This practice was also the source of the multiple meanings of the word "score", which means to make a mark, keep count, or the quantity 20. The word "tally" comes from the word for cut, as is still evident in "tailor". When a debt was owed to the Treasury the tally stick was cleft down the middle and the debtor given one half, the Treasury the other. When the debt was settled the two pieces were joined to check that they "tallied".

Counting these tally marks is rather laborious, especially if large totals arise. Individual marks have to be mentally counted and then the number of sets has to be totalled as well. Elsewhere, we find systems of tallying where the pattern of marks is designed to be more intuitively recognisable as a self-contained picture. The mind doesn't have to "count" to grasp the running total. Chinese tallying used five single marks of the character that means "correct" or "right" to build up

In South America, we find occasional use of a system that is similarly memorable, with a gradual build-up of numbers by lines around a square, completed by the two diagonals. This is associated with a particular form of gaming where a score of eight is aimed for.

We are familiar with a variant of this square frame counting when we keep score in a cricket match by making six marks in two columns of three, side by side — a dot if no run is scored, or the number scored, or a w if a wicket falls. Other symbols denote wides, byes, no-balls and leg byes. If no runs are scored off all six balls, the six dots are joined up to create the sides of an M, denoting a "maiden" over; if no runs are scored and a wicket is taken, they are joined to form a W, to indicate a "wicket maiden" over. In this way a glance at the score book reveals the pattern and number of runless overs.

It is tempting to combine the insights from South American games with those of the cricket scorer to create an ideal aide-mémoire for anyone wanting to tally in tens and not have to count up to ten vertical marks to "see" where the running total has reached. First count from 1 to 4 by placing dots at the four corners of a square, keep on counting from 5 to 8 by adding the four sides, and count 9 and 10 by adding the two diagonals. Each set of ten is represented by the completed square of four dots and 6 lines. For the next ten move on to a new square. Can you invent some more memorable ways of counting without counting? 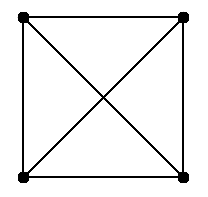 Did you manage to answer the puzzle posed in Outer space: Some benefits of irrationality? If not, you can find the answer here!
Read more about...
history of mathematics
mathematics in sport
arithmetic
outerspace
tallying
Tweets by plusmathsorg