In the first part of this article we looked at the elementary particles and the forces they feel. Now we will explore some mysteries of particle physics that still remain open.

Neutrino physics has been one of the most exciting areas in particle physics in recent years. In the 1960s experiments with neutrino beams at accelerator laboratories showed that neutrinos associated with electrons were different from those associated with muons. In 2000 the third neutrino (the tau neutrino) was found.

In the late 1960s, Raymond Davis discovered that the number of neutrinos reaching the Earth from the Sun was only about one third of the number expected from theoretical calculations of fusion reactions. The experiment was a very difficult one, but it continued for many years and the calculations for the reactions in the Sun were refined. Later experiments, using different detection techniques which were sensitive to different energies of solar neutrinos, all showed deficits. One suggested solution to this solar neutrino problem was that the neutrinos generated in the Sun (which are electron neutrinos, see the table of elementary particles on the right) transformed into one or both of the other neutrino types, which would not be recorded in the experiments. Such neutrino mixing or oscillations requires neutrinos to have a non-zero mass.

In the 1990s several very large detectors, buried deep underground to shield them from unwanted radiation, investigated solar neutrinos and also neutrinos of much higher energies originating from decays of atmospheric cosmic rays. Another important experiment measured the flux of electron-neutrinos at a central location around 140 to 210 km from a large number of nuclear reactors in Japan. A consistent picture has now emerged. Neutrino mixing does occur. Raymond Davis, and Masatoshi Koshiba, the pioneer of the largest detector, Kamiokande, shared the 2002 Nobel Prize in Physics for their results. Since then accelerator neutrinos have also been investigated in large deep underground detectors. 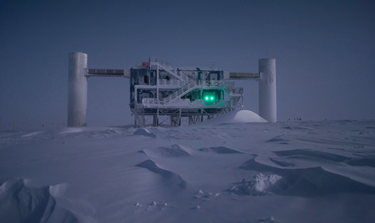 Several large neutrino detectors have been built recently, including Ice Cube which uses a cubic kilometre of ice in Antarctica to detect very high energy cosmic neutrinos. Interaction in the Earth of these neutrinos give rise to high energy electrons or muons, which are then detected by the light they emit (called Cherenkov radiation) in the ice, which registers in photomultipliers buried in the ice.

Neutrinos have always been found to spin one way (left-handed), and antineutrinos the other way. This corkscrew-like behaviour is called helicity. However as neutrinos have rest masses, in a frame of reference travelling faster than the neutrinos, the velocity will be reversed relative to the spin. Hence it is possible that neutrinos and antineutrinos are actually identical, and the experimental differences are just caused by the helicities. Such particles would be named Majorana neutrinos after the person, Ettore Majorana, who made this suggestion in the late 1930s. In that case certain heavy nuclei could undergo beta decay giving out two electrons and no neutrinos. Searches for this are in progress. (See this article for more on neutrino physics.)

In this short summary, very little has been written about the theoretical advances in particle physics. There are mathematical schemes which unite the strong interaction with electroweak theory. These are known as grand unified theories, or GUTs. Another theory, supersymmetry, unites the building blocks — the quarks and the leptons — with the force carriers. This requires new partner particles for all these objects, none of which have so far been discovered. Superstring theories, and their recent extension, M-theories, which require supersymmetry, are exciting and fashionable. They treat particles as excitations of tiny strings. This avoids objectionable infinities which arise in the mathematics when particles are treated as point objects. (See this article for more on string theory and this article for more on M-theory.)

Superstring theories do, however, require more than the usual three space and one time dimension. The unobserved dimensions are assumed to be compactified — curled up so that they are too small to be observable, just as an overhead telephone wire appears from a distance to be only one-dimensional (see here for more). Superstring theories have the potential to provide a quantum theory of gravity and to unite gravity with the other forces, and there is much activity in this field. 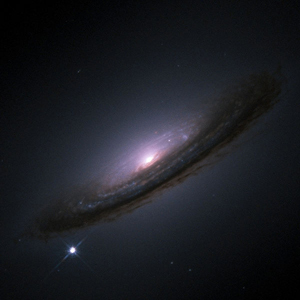 A Hubble Space Telescope image of the supernova 1994D on the edge of Galaxy NGC 4526. Observations of supernovae led to the conclusion that the Universe is expanding at an accelerating rate. Image courtesy NASA.

The "hot big bang" picture assumes that the early Universe was a primordial soup of elementary particles, and today's high-energy machines provide collision energies like those which existed when the Universe was less than one nanosecond old. Accurate measurement of the fluctuations in the cosmic microwave background, the observation of the acceleration of the expansion of the Universe, and computer modelling of galaxy formation and clustering have recently provided a consistent view of the Universe. The Universe is geometrically flat: parallel light rays do not converge or diverge. The observable matter in the Universe, that is, that which can be detected in any part of the electromagnetic spectrum, only accounts for about 5% of the energy density of the Universe. Another 27% is cold dark matter and the remaining 68% has been dubbed dark energy. Neutrinos can only make up perhaps 0.5% of the total. So we know quite a lot about particle physics, but only about the above 5% !

Candidates for dark matter are WIMPs — weakly interacting massive particles — of which the favourite is the neutralino, the lowest mass supersymmetric particle. Searches for WIMPS are in progress in several underground laboratories. Dark energy is even more mysterious. It appears to be like a negative pressure of space, reminiscent of the cosmological constant which Einstein put into his equations to prevent the gravitational collapse of a static Universe, before Hubble's discovery that the Universe was expanding.

Plans for an upgrade of the LHC are in an advanced state. The possibility for an even larger proton-proton collider at CERN is being explored. Designs for a large linear electron-positron collider are also in advanced stages, and there is hope that one such machine might be approved in a few years' time, and built as a world-wide collaboration. At present the most likely site is in Japan. In the more distant future it may be possible to make intense and well-controlled high energy neutrino beams from decays of muons in a storage ring, although at present many technical problems remain unsolved.

The origin of the vast preponderance of matter over antimatter is still unknown. There is hope that it might be discovered within the next few years. Supersymmetric particles, if they exist, should be found at the LHC. If not found, supersymmetry will presumably be discarded and some alternative theory will take its place.

What else will emerge? 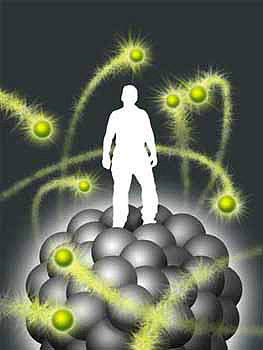 Physicists take for granted that the charges of electrons and protons are numerically equal, and indeed experimentally they are equal to better than 1 part in 1021. However, leptons and quarks are quite distinct. The charge of three quarks is numerically equal to that of one electron, and this cannot be a coincidence. Perhaps at high energies, such as existed in the early Universe, leptons and quarks coupled with each other. At lower energies, this symmetry is broken in an analogous way to electroweak symmetry breaking. In 1997 there was excitement when some collisions between positrons and protons at the HERA machine at DESY gave some indication of the existence of such leptoquarks. With more data this interpretation turned out to be wrong, but it still seems likely that in the fairly near future some better understanding will arise of the connection between leptons and quarks.

Superstring theory may also come up with some predictions that can be tested. But although the graviton, the quantum transmitter of the gravitational force, fits well into the superstring picture, it seems unlikely that it will be found in the near future. However, gravitational radiation is predicted from general relativity, and its existence can be inferred from the careful measurements over many years of the change in period of a binary pulsar (see here to find out more). Several detectors for gravitational radiation are in the final stages of construction. They are large optical interferometers, with arms 0.6km to 4km in length, looking for the distortion of space caused by violent astronomical events. So the wave properties of gravity will open a new window in astronomy. There will no doubt be unexpected surprises, as there have been in the past. I predict that particle physics and its links with astrophysics and cosmology will continue to be exciting in the foreseeable future. 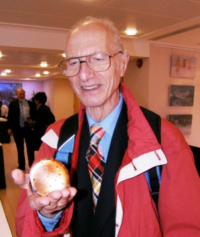