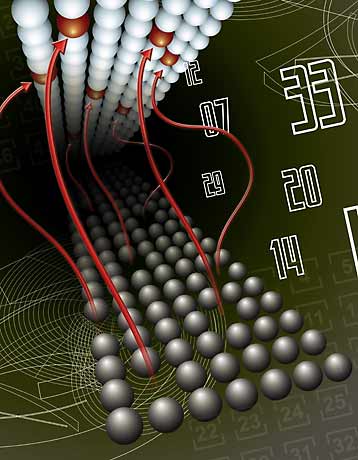 If you suspect that the national lottery is rigged, then why not play a lottery based on a process whose randomness is guaranteed: radioactive decay. You won't become a millionaire — there's only one iPod Shuffle to be won — but your chances of winning it are significantly higher than in ordinary lotteries and you'll have the pleasure of experiencing the weird world of quantum mechanics first-hand.

The quantum lottery was set up by Jaspal Jutla, an undergraduate in physics at the University of Southampton, as part of her degree dissertation. Rather than 49 numbered balls, Jutla employs the radioactive element caesium-137, which decays into stable barium-137 with a half-life of 30.17 years. The decay of caesium atoms is governed by the laws of quantum mechanics, and these laws dictate that the processes involved are inherently random. Jutla has built a device which counts the number of atoms decaying in a given period of time and it's these counts that, on the 2nd of May, will produce the winning string of digits.

The decay of caesium into barium is possible as a result of Heisenberg's uncertainty principle, which allows the classical laws of physics to be broken for extremely short periods of time. In order to turn itself into barium, a caesium atom has to turn one of the neutrons in its nucleus into a proton while simultaneously emitting an electron. According to classical physics, the process of emitting the electron should be impossible, as it requires more energy than the atom has available. However, the uncertainty principle states, loosely speaking, that there is a trade-off when it comes to observing both time and energy in a physical system: the more accurately you measure the one, the less accurate you can be about the other. If you're looking at a system on a very small time scale, there's only so much you can say about its energy. But this isn't because your measuring equipment doesn't allow you to pin down the exact value of the system's energy. Rather, there is no one true value, but a whole range of possible values, all of which the system's energy could take with a certain probability. Thus, there is a real chance — a non-zero probability — that the caesium atom momentarily acquires more energy that it should have and is able to spit out an electron.

Acquiring a small amount of energy from out of nowhere violates the laws of classical physics. However, the energy is immediately re-released as the atom emits the electron. Because of the uncertainty principle, it's impossible to detect the small change in energy over such a short period of time, as you can't be sufficiently precise about both quantities simultaneously. So the atom has performed its breach right under the noses of the classical laws and gotten away with it.

Randomness enters the set-up because we can't be certain that an atom will acquire enough energy to emit an electron. All we can say is that it's got a 50-50 chance to do so within 30.17 years, the length of caesium's half-life. If you've got a large amount of caesium atoms, you can expect on average that half of them will have decayed within this period of time. But you have absolutely no way of telling exactly when or if an individual atom will decay. This isn't because physicist's haven't yet discovered the underlying mechanisms that make atoms decay. On the contrary, the laws of quantum mechanics dictate that there simply is no way of knowing precisely when an atom will decay — all we have is a probability. The process of decay is fundamentally and inherently random in the sense that it is completely unpredictable. 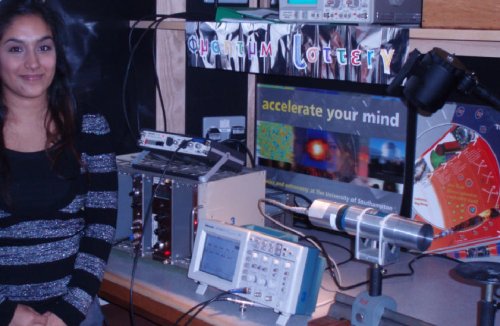 Jutla's device consists of a small amount of caesium which is left to decay. Every electron emitted by a decaying atom causes a gamma ray photon to fly out of the system. These photons are detected by Jutla's device via a scintillation crystal, giving a way of counting individual decays. To generate a string of winning numbers, Jutla will count the number of decays in eight one-second time intervals. She'll then compare the number from each interval to an average, which she will have earlier computed by observation. If the number of decays in a one-second time-slot is above the average, she will put down a 1, and if it is below, she will put down a 0. This will give her a string of eight binary digits, and it's this string that you're invited to predict on her website. If you get it right, the iPod Shuffle is yours. Note that there are only 28=256 different ways in which to arrange 0s and 1s into a string of length eight, so your chances of winning are a lot better than for an ordinary lottery.

But even if you don't win, Jaspal has a consolation for you: "In the many worlds interpretation of quantum mechanics, it is postulated that when a measurement is made the universe splits into many copies so that all possible outcomes occur in one part of this multi-verse. Since a quantum process determines my lottery numbers, every possible number would win, meaning that all of you who played would be winners in one world!!"

they are talking about a quantum net next...