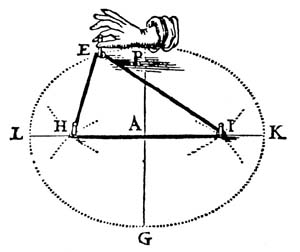 When Kepler was decorating his Christmas tree you can be sure his Christmas baubles weren't boring and round. Oh no, we're sure they would have been beautiful and elliptical!

Ah, the humble ellipse. It might look just like a squashed circle but it is so much more! One of the conic sections discovered by the ancient Greeks, it generalises the circle using eccentricity, a measure of how squashed it is. A circle is an ellipse with eccentricity zero, a very squashed nearly flat ellipse will have eccentricity close to one. An ellipse has two foci (points that lie within the ellipse), with the handy property that the sum of the distances from each focus to a point on the ellipse is equal to the ellipse's width. But not just a pretty shape, it turned out to be Kepler's answer to life, the universe and everything - he discovered that the heavenly bodies didn't move in circles, as had been thought for hundreds of years, but instead had elliptical orbits around the sun. Kepler tried to convince himself of the perfection of this design of the heavens by describing the interaction of nature with the heavens introducing a distortion to pull the motion from a perfect circle into an ellipse.

You can read more about conic sections and Kepler's proof on Plus.