New episodes of Pointless, the TV quiz show, return to our screens tonight after a coronavirus-induced hiatus! To celebrate, John Haigh explores some more of the maths behind the show, following on from his earlier article about being unlucky on the show. 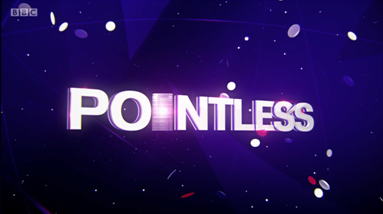 This show seeks to reward obscure knowledge: we can all name some football club that has won the FA Cup, but what answer might we give if the aim is to name such a club that other people won't think of?

The test used for obscurity of a (correct) answer is to count how many of 100 randomly selected people give that answer. So although teams like Manchester United or Arsenal will be very popular, I would be confident that Old Carthusians, Clapham Rovers or Blackburn Olympic would get very few mentions – probably zero, that much-desired "pointless" answer.

Four couples begin the game, three of them are eliminated over a series of rounds based on a wide variety of subjects. In the final round, the remaining pair ( the "winners") select a topic from a list presented to them, and are allowed to offer three possible answers: they will win money if any of their answers are "pointless". Frequently, they will fail to do so, but do give correct answers chosen only by a small number – two or three – of the 100-strong pool. The presenters commiserate with the "winners" on their bad luck in giving such good, but not prize-money-winning, answers.

How many new pairs?

Each daily show begins with four pairs of contestants. The winning pair (who may, or may not, have won some prize money), and any other pairs who have failed to win in their last two attempts, are replaced by new pairs in the next day's show. The hosts often mention how many new pairs there are in the show: here we explore what that number might be expected to be.

There seems to be no evidence that a previous appearance makes any difference to their chances of winning, so we assume that, in each show, all four pairs are equally likely to win, whether it is their first or second appearance. Let X denote the number of new pairs in the current show, and Y the number of new pairs in the next show, so we have 1 ≤ X, Y ≤ 4. Under our assumptions:

Displaying this as a matrix

of these transition probabilities (values for

running down the rows, for

running across the columns), we see that

If you consider the sequence of successive numbers of new pairs of contestants appearing each day, you'll notice that you can disregard all but the most recent value when you are predicting how many new pairs will appear tomorrow. Some readers will recognise that this means the sequence forms a Markov Chain. Examples of the use of Markov Chains include your fortune after successive bets on Red in a casino, the diffusion of gas particles between two closed containers, and the lengths of some queues. But Markov Chains are not used to predict the weekly numbers of deaths from COVID-19, where clear trends are apparent, or the daily number where reported deaths at weekends are fewer.

It's easy to see that, after a few days, it's possible for the number of new pairs appearing the next day on Pointless can be any value of 1, 2, 3 or 4. Under these circumstances, theory tells us that there is some probability vector

(where each entry is non-negative, and they add together to equal 1) which shows how often the four values will occur in the long run. Theory also tells us that if

is the solution to the equation

, it gives the long-term probabilities for getting 1, 2, 3 or 4 new pairs appearing in a show. Solving this equation, we obtain

Bigger prizes at no extra cost!

The jackpot that is the winning prize starts at £1000, and if not won is carried over, with another £1000 added each time. (When a "pointless" answer is given early in the show, another £250 is added, but this does not affect the argument below, so we will ignore it.) It is plain that the hosts are slightly embarrassed when the winning pair leave with just £1000 to share, but the following change in the jackpot rules might alleviate this.

After the jackpot is won, the new jackpot for the next show is £

is added. The successive jackpots, if unwon are then

For example, to win exactly £

, there must be three shows where the jackpot is not won, followed by a fourth where it is won. Assume the chance of winning the jackpot in any show is

(independently in each show), where

. Then the prize amounts listed above have respective probabilities

. So, over the long term (using what is called an infinite series), the mean prize amount won is found by weighting the prize amounts by their respective probabilities:

We can evaluate the finite answer to this infinite series, by separating out the

components: Each of these infinite series converges to a finite answer: and So the long-term mean prize amount would be Under the present set-up, with

, we should expect the mean prize amount to be

over the long term. With new values of

, the mean amount will be unchanged so long as we keep or We suggest taking

: the average prize will then be unchanged when

. Hence, so long as the jackpot winning chance does not exceed

, all winning pairs share at least £2500, and the budget for prize money will not increase.

John Haigh taught at Sussex University from 1966 to 2019; the second edition of his The Mathematics of Everyday Life was published earlier this year.

Interesting to read. Could be nice to do a series on gameshow maths.