A proof with a hole solution

A proof with a hole:

Forget all that business about

being an irrational number with infinitely many decimal places: I can prove conclusively that

First of all, let's recall that

is defined to be the ratio between the circumference and the diameter of a circle, which is the same regardless of the size of the circle. So, using the notation of the diagram below, we have 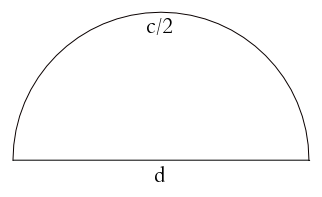 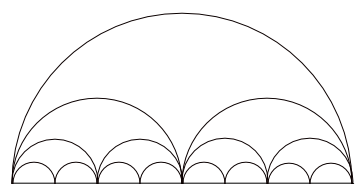 The mistake lies in the next step: the assumption that the lengths of the strings of semi-circles tend to the length of the diameter. This is false! What happens in fact is that while at each stage we replace the semi-circles involved by smaller ones, these also become more numerous, so that the replacement makes no difference at all to the overall length. Every string of semi-circles has length 1, since

for any n. We've simply replaced a number of big wriggles by a greater number of smaller wriggles without changing the length.

The lesson is, when it comes to things like length, don't be fooled by appearance. A curve may look like a straight line, but it may be so wriggly at a small scale that in fact it's a lot longer than the line. Even worse, a set may look like a decent curve that should have finite length, but may in fact be infinitely long. And what exactly do we mean by "length" anyway? For an example of a curve with infinite length, check out the Koch curve in Plus article Jackon's fractals. And to learn about notions of length read Plus article Measure for measure.