On the road to dark energy (with chameleons)

We may be a little closer to a direct detection of dark energy thanks to a new result that came about, in a sense, by accident.

The kind of matter we are familiar with, which we can see and touch in the world around us, only makes up less than 5% of the stuff the Universe contains. Roughly 27% is dark matter, which doesn't interact with light and is therefore invisible to us. Physicists discovered it is there because of the gravitational pull it exerts on matter we can actually see, but they don't yet know what it is made of. (You can find out more here.) 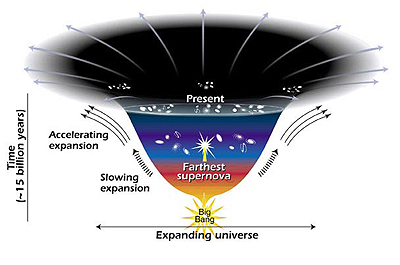 Dark energy makes up the remaining 68%. Physicists have known since the 1920s that the Universe is expanding (observations show that stars and galaxies are moving apart) and since 1998 they know that the expansion is accelerating. Something must be responsible for the acceleration — and this something is what physicists have called dark energy (find out more here).

Even though we don't know what dark energy or dark matter are made of, observations of left-over radiation from the Big Bang (the cosmic microwave background), the clustering of galaxies, and the distances to luminous exploding stars (Type Ia supernovae) have enabled physicists to estimate what proportion of the Universe they each make up.

A direct detection of either dark energy or dark matter — that is, a detection via other means than the effect of their gravity — would count as major breakthroughs in our understanding of the Universe. And in the latest result, efforts to find the latter might have resulted in an important hint towards the former. XENON1T, an experiment housed in the largest underground research facility in the world located below Gran Sasso mountain in Italy, was designed to detect dark matter. When XENON1T released its observations in 2020, the data contained an anomaly (a so-called excess of events) which current theories of how dark matter should behave couldn't explain.

This is where Anne-Christine Davis and Sunny Vagnozzi, both of the University of Cambridge, jumped in together with collaborators. They checked to see whether a particular theory describing dark energy, rather than dark matter, could explain the anomaly and were rewarded with an unexpected level of success: their theory fits the observations better than they had dared to hope and opens up an important new lead in the search for dark energy.

"We are pretty excited about the result," says Davis. "I have been around for a long time and I know that to get anything positive [regarding dark energy] is really amazing."

"The work started out, in large part, as a bit of fun, we weren't that serious about it at the start," says Vagnozzi. "It's remarkable that things worked out. The fun of it reminds us of why we do science."

The work was conducted together with Philippe Brax, Jeremy Sakstein, and Luca Visinelli and published in Physical Review D.

Ruled out by reality 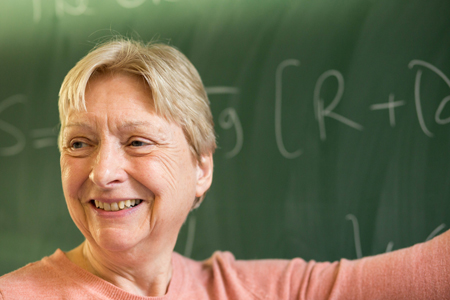 Anne-Christine Davis, one of the authors of the new study.

While conceived in a spirit of playfulness, the result of Davis, Vagnozzi and their co-authors is rooted in serious theory. When XENON1T researchers saw the anomaly in their data they came up with their own attempt at an explanation. The observation could to some extent be explained by hypothetical particles called axions, which it has been suggested constitute dark matter, being produced in the Sun and behaving in a particular way. A mathematical model which describes this behaviour gave predictions which matched the observed data reasonable well. (For those who are familiar with the terminology the sigma value of the fit was 3.3 — generally physicists require a sigma value of 5 to be content that a fit between a model and observations is not just a fluke.)

The axion model comes with a huge hitch, however: it is ruled out by astrophysics, and more specifically by stellar evolution. "If you want to explain the XENON1T results with axions, then you need the Sun to produce quite a copious amount of axions," says Vagnozzi. "If the Sun produces this many axions, then denser stars, like white dwarves, are going to have to produce lots and lots more of them. This would make them cool extremely fast and evolve in a way that is not allowed by observations (at an enormous sigma value, close to 20)."

Physicists investigating dark energy are familiar with theories not matching reality. At cosmological scales, involving massive objects such as stars and planets, only one of the four fundamental forces matters: gravity. Einstein's general theory of relativity describes gravity extremely well, but doesn't include a satisfactory explanation for dark energy. This is why physicists have come up with ways of modifying Einstein's theory. Most modified gravity theories predict the existence of a fifth force which, naively, we would expect to detect in our solar system — the trouble is, we don't. 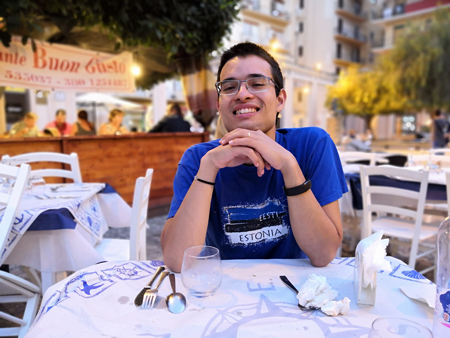 Sunny Vagnozzi, one of the authors of the new study.

A way around this is to introduce screening into the theories: mechanisms that suppress the fifth force within regions like the solar system. Davis has been instrumental in developing a mechanism called chameleon screening since 2004. In chameleon-type models for dark energy the fifth force becomes very short-ranged in environments where there is a lot of matter, such as our solar system, so that it can escape detection — it is screened. In sparser environments, like the largest observable scales of the Universe, the force becomes unscreened and unleashes its power. "It's almost a having-your-cake-and-eating-it-model," says Davis.

In chameleon theories dark energy is assumed to be made up of hypothetical particles called chameleons, which could be produced in the Sun — just like the axions in the XENON1T model. "The XENON1T collaboration fitted their data with axions coming from the Sun," says Davis. "We would expect dark energy particles, if they exist, to be produced in the Sun in a similar way. So we thought, 'why not chameleons?'"

Off the beaten track

The team then went on to compare the predictions of a chameleon-type dark energy model with the XENON1T data and found a surprisingly good fit with a sigma level of 2. "So our model doesn't fit as well as the axion model, but it's still quite a good fit," says Davis. "And we have the huge advantage of not being ruled out by astrophysical tests."

Davis and Vagnozzi stress that their result doesn't prove that dark energy particles have been detected by XENON1T. The good fit of their model to the data may still turn out to be a fluke. "We are at a point where there is a hint towards dark energy, but we cannot claim a detection," says Vagnozzi. "What we would like to see, to be confident that dark energy has been detected, is complementary signatures in different observations (such as cosmological ones). If you cross-match them and they all agree, then you can start to be convinced."

If XENON1T really did see dark energy, one would expect to get a stronger signal from future observations, especially because XENON1T is due for an update. But even if this isn't the case, Vagnozzi and Davis won't be disappointed.

"The real legacy of our work is beyond XENON1T," says Vagnozzi. "It's the fact that you can actually look for dark energy in ways you had not thought of before, at zero extra cost, using existing experiments. We are very interested in new ways of searching for dark energy off the beaten track."