Maths in a minute: Dark matter

Physicists believe that around 82% of all the matter in the Universe is dark matter. It doesn't interact with light (to be precise, with electromagnetic radiation) and therefore we can't see it. So how do we know it's there? To explain, here's an extract from a Plus article by Martin Rees. 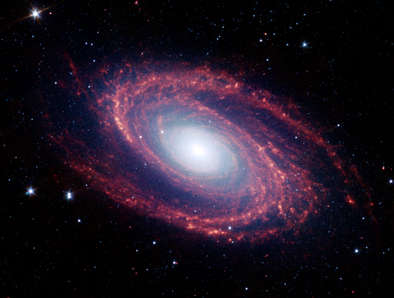 "The evidence for [dark matter] came first in the 1930s, but was taken seriously only in the 1970s. Galaxies or clusters of galaxies seem to be held together by the gravitational pull of more material than we actually see — that invisible material has been dubbed dark matter and is thought to make up around [27%] of our Universe. By observing galaxies in a group and how they are moving around we can then work out how much gravity there is holding them together. From that calculation we can infer that if there was no more gravity holding the system together than is produced by what we see, then it would fly apart.

We can also look at gases and stars in the outlying part of our Galaxy, which orbit around the central hub, and we can conclude that these gases and stars would escape into intergalactic space unless there was more material pulling them in than what we actually see.

The evidence for dark matter itself is simple and almost incontrovertible: the way stars and galaxies are moving suggest that something invisible must be exerting a gravitational pull on them. It's the same reasoning used in the 19th century when the planet Neptune was inferred to exist because the orbit of Uranus was deviated by the pull of a more distant unseen object.

In our Solar System, there is a fine balance between the tendency of gravity to make the planets fall towards the Sun, and the centrifugal effect of the orbital motions. Likewise, on the far larger scale of an entire galaxy, there is a balance between gravity, which tends to pull everything together into the centre, and the disruptive effects of motion, which, if gravity didn't act, would make its constituent stars disperse. Dark matter is inferred to exist because the observed motions are surprisingly fast — too fast to be balanced just by the gravity of the stars and gas that we see.

In disc galaxies like our own evidence for dark matter comes from the measurements of the speeds of stars, and of gas clouds. These speeds, particularly those of outliers orbiting beyond most of the stars, far out from the central hub, are puzzlingly high. If the outermost gas and stars were feeling only the gravitational pull of what we can see, they should be escaping, just as Neptune and Pluto would escape from the Sun's influence if they were moving as fast as the Earth does. The high observed speeds tell us that a heavy invisible halo surrounds big galaxies. If there weren't a lot of dark stuff, galaxies would not be stable, but would fly apart. The beautiful discs or spirals are essentially just "luminous sediment" held in the gravitational clutch of vast swarms of invisible objects of quite unknown nature. Galaxies are up to ten times bigger and heavier than they seem. The same argument applies, on a larger scale, to entire clusters of galaxies, each millions of light years across. To hold them together requires the gravitational pull of about five times more mass than there is in the stars and gas we observe."

So what is dark matter made of? The short answer is that nobody knows, though there are a number of candidate theories. To find out more about these, and also about others ways of inferring that dark matter exists, read Martin Rees' full article.

This article is part of our Who's watching? The physics of observers project, run in collaboration with FQXi.

Read more about...
Maths in a minute
dark matter
gravity
cosmology
The physics of observers
Tweets by plusmathsorg