Shaped by the wind 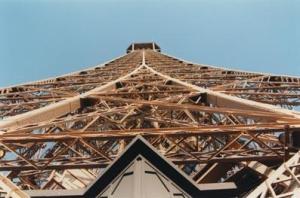 When visitors to Paris admire the elegant tapering curves of the Eiffel Tower, they probably aren't aware that they are observing a triumph of mathematics over the forces of nature. The distinctive shape of the Tower, although beautiful, was actually designed mathematically by Eiffel to withstand the forces of the Parisian winds. Eiffel said of the tower, which stood as the world's tallest building for 41 years:

"What phenomenon did I have to give primary concern in designing the Tower? It was wind resistance. Well, I hold that the curvature of the monument's four outer edges, which is as the mathematical calculations have dictated it should be, will give a great impression of strength and beauty."

The mathematical calculations dictating the shape of the Tower have been examined in a recent article in the American Journal of Physics by Joseph Gallant.

is the half-width of the Tower at height

is the half-width of the Tower at the ground and

. (This is a root of the quadratic equation describing a parabola resting against the right side of the Tower, so the curve of the Tower's right side is described by the negative arm of the parabola.)

Eiffel, experienced in designing open lattice structures, allowed for a large safety margin by designing the Tower to withstand wind pressures of 4 kN/m2. The fastest winds recorded at the Tower reached a speed of 214 km/h in 1999 and would have produced pressures of just 2.28 kN/m2. 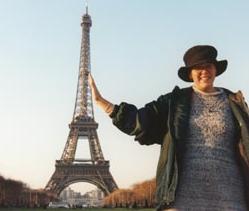 But is it stronger than me?!

You write "The Eiffel Tower was built in 1889 for the Universal Exposition as a monument to the scientific achievements of the 18th century." Shouldn't that be 19th Century - or perhaps 1800s?

Thanks for spotting that mistake!