Maths is often used in finding key criminals in organised crimes which involve many people, such as in terrorist attacks. This uses an area of maths called network theory, also known as graph theory. A network, or graph, is a structure used to model relations between objects. It consists of a set of nodes and a set of edges.

A network (or graph) with five nodes and five edges.

Centrality is used to detect the relative importance of each criminal in the network. There are various measures of centrality that are commonly used to detect key players. Depending on the measure of centrality used, we may find different results when looking for the key criminal.

Degree centrality measures how important a node is by counting the number of connections it has with other nodes in the graph. This is used to find popular players in the network.

A network representing 7 criminals who have connections with each other.

is connected to 3 other criminals, criminals

There are a total of 7 nodes in this network. So, the degree centrality of criminal

You can check for yourself that

In the table below we take every pair of criminals in our example network shown above, making sure we do not repeat any pairs. Information flowing from criminal

is the same as from

because we are looking at connections which have no direction. 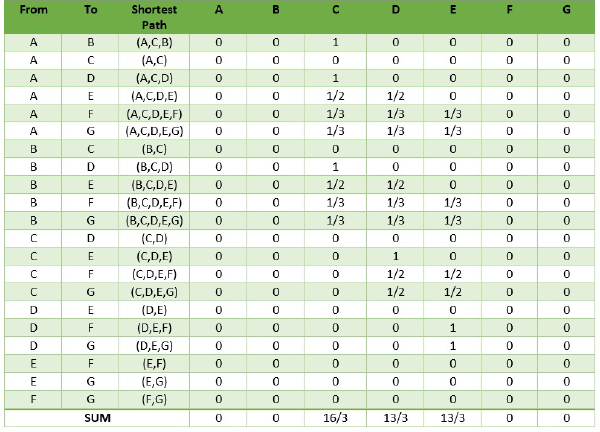 Here are some examples:

, which happens to be the largest betweenness centrality score of all the criminals of the network.

(Strictly speaking, working out the betweenness centrality of each node also requires us to divide the result we get for a node from the procedure just described by

However, this normalisation doesn’t change the order of criminals by their scores.)

Closeness centrality measures how easily nodes are reached in the networks. It detects criminals that are easily able to send information through a network.

To calculate the closeness centrality of a node

for the number of nodes that are one edge away from

for the number of nodes that are two edges away from

for the number of nodes

is the longest chain of edges you can find starting at

. The closeness centrality of

Our example network, modified to illustrate distance away from node C in terms of the number of edges.

As an example, suppose we want to find the closeness centrality of criminal

in our example network. Criminals

are all 1 edge away from C and are illustrated with square shaped nodes. Node

is 2 edges away from

and shown as a triangle shaped node. Nodes

are 3 edges away from

and are shown as pentagon shaped nodes. There are 3 nodes 1 edge away, 1 node 2 edges away, and 2 nodes 3 edges away from node

Substituting these values into our equation, the closeness centrality of criminal

The maths you see in school or that you may study in the future is used in many areas of crime investigations which just goes to show how relevant maths is in the real world. There are many other exciting uses of maths in crime investigations, such as geographic profiling using Rossmo's formula and reconstructing accidents from skid marks which I encourage you to explore!

You may also want to read Solving crimes with maths: Bloodstain pattern analysis by Marcia Gomez. 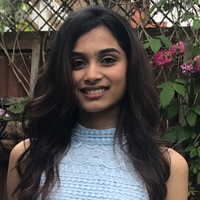 Marcia Gomez is a recent Maths and Economics graduate from the University of Bath, who is particularly interested in statistics and how maths is used in the real world. She is currently applying her knowledge in the world of finance.