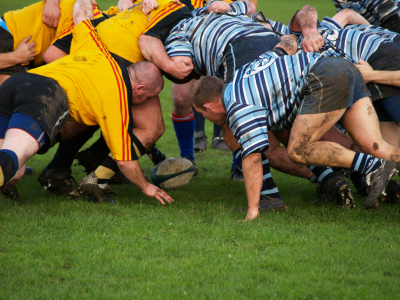 You might think that the last thing going through a rugby player's mind would be mathematics. It's difficult to imagine a 120 kg prop contemplating the current nature of the universe just before game time, or the coach giving a short tutorial on statistics for inspiration. Rugby may be the game they play in Heaven, but what of the maths and stats behind the artistry?

With the rugby world cup now under way, let's have a look at some interesting statistics. To the disappointment and ire of rugby fans, football (or soccer to Australians and Americans) has been shown to be statistically the most exciting sport of all. Eli Ben-Naim, Sidney Redner and Federico Vazquez at the Los Alamos National Laboratory in New Mexico have recently undertaken a study in which they took a look at a range of sports to find out which one had the most upsets — that is, the most games that were won by the underdog. Their theory is that the more often a score line is unpredictable, the more exciting the sport. The team analysed results from over 300,000 games of hockey, American football, baseball, basketball and football. Their results showed that the frequency of upsets was highest for football, followed by baseball, hockey, basketball and finally American football. Certainly, the possibility of an upset in a football game between a class team and a footballing minnow is much more likely than that in a game of rugby. The reason is simple: far less "points" are scored in football, meaning that a game can be decided by freak events. In rugby a minnow may hold, or even out-point, a top team for a period of time, but a single freak try is unlikely to be the deciding factor over 80 minutes. Rugby fans would, however, argue that it is the fact that there are so many points scored that makes it a more exciting game than the dull, mainly scoreless, football.

Apart from watching the World Cup, many punters will be putting their money where their mouth is and betting on it. But there is one factor that goes well beyond the form guide, and one that gives teams such as Wales a big advantage. Russell Hill and Robert Barton from Durham University have tracked the winners of boxing, taekwondo, Greco-Roman wrestling and freestyle wrestling, and found that in these sports, where the athletes do not wear national colours, but are randomly assigned either red or blue, the red competitor wins over half the bouts. So wearing red really does seem to give you an advantage! And it was in close matches where the red garb really mattered — the red side won at 62% in these encounters. Hill and Barton theorise that such effects may be due to instinctive behaviour. Perhaps human competitors experience a testosterone surge while wearing the colour, or feel submissive when facing a maroon opponent. Perhaps it goes some way to explaining the dominance of New Zealand in their intimidating all black uniform.

In some bad news for rugby fans, scientists in the Netherlands have found that it is almost impossible for linesmen to keep their eyes on the players and the ball at the same time — meaning that bad off-side calls and terrible judgements are inevitable. Raoul Oudejans from the Free University of Amsterdam asked three professional linesmen to assess 200 potential offside situations, and found that they got it wrong in 40 of those cases. They think that this is because of perspective error caused by the linesmen having to work on the sideline, and they suggest that they should work from the stands where such problems can be countered. Perhaps it is lucky that rugby has the video referee.

Whoever said rugby was a simple game, or statistics a dull subject?