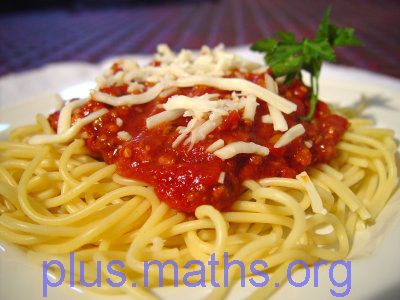 Why does dry spaghetti snap not into two, but three, four, and sometimes even ten pieces when it is bent? This mystery has worried many great minds, including that of Nobel laureate Richard Feynman, ever since the beginning of pasta. And now it has finally been explained by French physicists Basile Audoly and Sébastien Neukirch from the Laboratoire de Modélisation en Mécanique at the University of Paris.

When you hold a piece of dry spaghetti at both ends and start to bend it, you increase its curvature. Once the curvature becomes too much for the piece of spaghetti, it will snap at the weakest point. This initial snap will send waves through the two halves, causing them to sway back and forth. Intuitively, you may think that these waves gradually peter out, so that the two halves eventually come to rest in a straight position. But, according to Audoly and Neukirch, the exact opposite happens.

To model the breaking spaghetti, they used a differential equation that was first developed by Gustav Kirchhoff in 1850. The unknown quantity in this equation is the curvature of the two halves of the piece after the initial snap. When they solved it, Audoly and Neukirch found that rather than decreasing and eventually settling down to zero, the curvature actually increased in some parts of the two halves, causing further breakages at weak points. These snaps in turn sent out their own waves, starting a chain reaction that led to a whole avalanche of breakages.

This research might be slightly offensive to pasta lovers - who wants to eat short spaghetti? - but it does have important applications in other areas. Long and thin poles are frequently used by nature and humans to support heavier structures; just think of spiders' legs or the steel constructions holding up bridges or sky scrapers. The snapping of spaghetti serves as a good illustration of how brittle poles behave under stress, something engineers need to know in order to keep support structures from failing. Many a future disaster may well be prevented by pasta.

You can watch movies of breaking spaghetti and read the original paper on the Breaking Spaghetti Page.
Read more about...
differential equation
wave
physics
Tweets by plusmathsorg