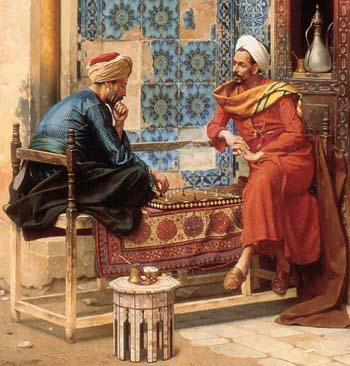 The Chess Game, by Ludwig Deutsch

Game theory is a great way of sneaking up on maths. You can start off playing an actual game, then start thinking about strategies, and before you know it you're doing proper maths, either conceptually or using equations and formulae. In this teacher package you'll find all our articles on game theory, divided into two categories:

Game theory under the microscope

Does it pay to be nice? - the maths of altruism — Does it pay to be nice? Yes, it does. And we're not just talking about that warm fuzzy feeling inside, it pays in evolutionary terms of genetic success too. This two part article shows how game theory shows that being nice is unavoidable. Read part I and part II.

Does it pay to be clever? — Why are we so clever? In evolutionary terms this isn't obvious: evolution tends to favour cheap solutions and the human brain is expensive. It consumes about 20% of our body's energy budget yet it only makes up 2% of our body mass. So why did it make evolutionary sense for us humans to develop powerful brains? Game theory provides a possible answer.

The revelation game — Is it rational to believe in a god? The most famous rational argument in favour of belief was made by Blaise Pascal, but what happens if we apply modern game theory to the question?

Maths in a minute: The prisoner's dilemma — A brief introduction to one of game theory's staples.

Games people play — Combinatorial Game Theory is a powerful tool for analysing mathematical games. This article explains how the technique can be used to analyse games such as Twentyone and Nim, and even some chess endgames. A follow-up article, Practice makes perfect, looks at how computers are programmed to play chess.

Blast it like Beckham? — What tactics should a soccer player use when taking a penalty kick? And what can the goalkeeper do to foil his plans? Game theory can give you the answers.

If we all go for the blonde — This article revisits a scene from the film A beautiful mind, using game theory to decide on chat-up strategies.

Adam Smith and the invisible hand — Adam Smith is often thought of as the father of modern economics. In his book An inquiry into the nature and causes of the wealth of nations Smith described the "invisible hand" mechanism by which he felt economic society operated. Modern game theory has much to add to Smith's description.

Mathematical mysteries: Survival of the nicest — One of the most puzzling aspects of human behaviour is cooperation in situations where backstabbing and selfishness would seem to be more rewarding. From the point of view of evolutionary theory, the very existence of altruism and cooperation appear mysterious.

The Carol syndrome — Does being attractive guarantee a long line of suitors? This article uses game theory to find out.

Game theory in the news

Guilt counts — Is the fear of guilt what makes us be nice to other people? Game theorists investigate.

Trust me, I've evolved — Game theorists model the evolution of trust and trustworthiness.

Love's a gamble — Cheap or expensive? On the giving of gifts during courtship.

Leaving the markets — The 2009 Nobel Prize in Economics went to two unusual economists, one of whom used game theory to explore human cooperation.