With 8 bits, we have 28= 256 possibilities (each bit can be zero or one, and the possibilities multiply together). We call 8 bits a byte. The very common ASCII system makes each letter of the alphabet, both capital and small (plus punctuation and some other symbols) correspond to a number from 0 to 255 (for example a=97, b= 98 and so on), so one letter can be expressed with one byte. 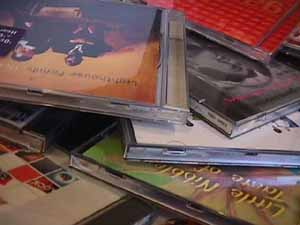 bytes - more than a whole book - just to fill the screen. A picture really is worth more than a thousand words!

As for a movie, we need

pictures per hour (60 minutes per hour, 60 seconds per minute, 24 frames per second). That is, we’d need

to store an hour of film.

A CD-R can typically store about 700MB, a DVD can store about 4GB. It's clear we have to do something clever (that is, data compression) to fit a movie on a disc.

Back to main article