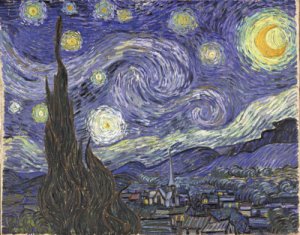 Vincent Van Gogh painted some of his most captivating paintings towards the end of his life during periods of intense emotional instability. Everything in these later paintings seems to be turning and churning, creating a sense of turmoil which many people find remarkably poignant. Now a team of physicists, led by José Luis Aragón and Gerardo Naumis of the Autonomous University of Mexico, have uncovered part of the secret behind the emotional appeal of Van Gogh's later paintings: their curls and swirls adhere to the same physical laws as turbulent fluids found in nature.

The team analysed three of Van Gogh's most curly paintings, Starry night, Road with cypress and star and Wheat field with crows, and checked if and how the results fit in with the physics of turbulence. As a measure of each painting's impact on the viewer they used the concept of luminosity, the intensity of the light reflected off different points on the canvas, which holds most of the information the human eye picks up on when viewing a scene. The team used their measurements to work out the probability that two points lying a certain distance apart are equally luminous. These probabilities give a good idea of how luminosity varies across the canvas, leading to a neat mathematical representation of a viewer's perception of the painting. 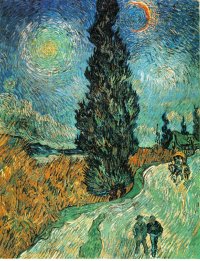 The behaviour of turbulent fluids can be characterised by the fluid's velocity at different points in the moving liquid: close to the center of an eddie the liquid will move faster than further away from it. In the 1930s and 1940s the Russian physicist Andrey Kolmogorov devised a statistical model for turbulence that has proved remarkably accurate and now lies at the heart of modern turbulence theory. As with luminosity above, an important component of the model deals with the probability that the liquid has the same velocity at two points that lie a certain distance apart. It predicts how this probability varies as the distance between the points changes. It also asserts that this variation, or scaling as mathematicians call it, is in some sense universal: it is the same no matter what kind of liquid you are looking at and what kind of external factors govern its churning.

It was to this model that Aragón and his team compared Van Gogh's churning skies and landscapes. The result surprised them all: the probability density functions describing the paintings' luminosities scale exactly as predicted by Kolmogorov's theory, confirming that Van Gogh's swirls mimic turbulence in nature with remarkable accuracy. The result suggests that it may well be this accurate representation of nature's complexity that accounts for the poignancy of his paintings. "We were very surprised," says Naumis. "We expected some resemblance with real turbulence, but we were amazed to find such a good relationship."

This is not the first time that maths has been used to analyse art (see the further reading list below for more Plus articles on this subject). Some scientists believe that this kind of analysis can give deep insights into how mathematical structures guide our visual perception and shape our appreciation of art, and into artists' instinctive ability to pick out and reproduce these structures. "Art sometimes precedes scientific analysis," says Naumis. "This is not the first time that this happens, other examples are the theory of tilings and fractals, which were observed by artists before scientists. Certainly this says something about the deep powers of observation of artists. We think that this work shows that we can quantify certain terms used by artists, and measure to what extent an artist is able to capture nature's complexity."

In Van Gogh's case there is another interesting aspect to the mathematical analysis: according to Naumis, it may hint at a connection between mental illness and turbulence. The three paintings all stem from psychotic episodes of Van Gogh's life; Wheat field with crows, for example, was painted shortly before he shot himself. For comparison, the team also analysed paintings from Van Gogh's calmer periods, such as the well-known Self-portrait with pipe and bandaged ear, but found no significant connection between those pieces and Kolmogorov's theory of turbulence. "It seems that there is a close relationship between the artist's state of mind and turbulence," says Naumis. He speculates that brain activity during periods of inner turmoil may have dynamical features similar to those of turbulence. So far, this is still only an unconfirmed idea, but if such a connection can be established, then this could lead to new ways of diagnosing mental illness by visually mapping brain activity.

The following Plus articles describe how maths has been used to analyse works of art:

Some aspects of turbulence are explored in Plus article Understanding turbulence.

You can find more Plus articles on maths and art in our archive.