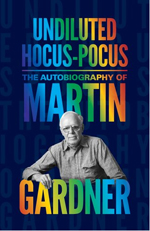 When I received my review copy of Undiluted Hocus-Pocus, Martin Gardner's new autobiography, the first thing I did was to take down my old, well-worn copy of his Mathematical puzzles and diversions and out fell a hexagonal paper model, a hexahexaflexagon, the subject of the book's first chapter, and indeed of the first Mathematical Games column which Gardner wrote for Scientific American. It is this column, whose highlights have been much reprinted in various collections, which inspired several generations of students to go on to become mathematicians. Gardner's success was the precursor to the explosion of "recreational mathematics" published in the last couple of decades. Familiar names as Ian Stewart, one of Gardner's successors as a writer for the same Scientific American column continued to carry the torch for a tradition which Gardner may be said to have ignited. To any readers who have not yet encountered Gardner's mathematical writings, I strongly urge you to try them! His collections of mathematical puzzles, tricks and articles all contain gems which serve to remind what amazing and beautiful subtlety can arise from the simplest-seeming questions. (See below for a list of Gardner's books reviewed on Plus.)

One point of great interest is that, in comparison to more contemporary popular mathematical authors, Gardner rarely delves into technically sophisticated or abstruse areas of mathematics, but will always give you something you can get your hands on, witness my model hexahexaflexagon. That is not to say his columns did not ever tackle deep subjects of current research interest — they did — but the problems were always ones you could in principle try to solve, even if you might have little chance of success! Perhaps the most surprising thing I discovered from reading Undiluted Hocus-Pocus was something of the reason behind this: Gardner had never, as I had assumed, trained formally in mathematics. As an undergraduate at the University of Chicago, he majored in philosophy, and it is this, rather than mathematics (apart from a few parenthetical teasers!) which pervades the book.

The style is that of a memoir, conversationally phrased, and not afraid to be sidetracked occasionally by an amusing aside. Gardner paints vividly an inside picture of American intellectual life in the twentieth century, coloured by honest accounts of the many influential figures with whom he came into contact. Both style and content reminded me of the anecdotal autobiographies of the physicist Richard Feynman. If you enjoyed such works as Surely You're Joking Mr Feynman you will certainly appreciate this volume. For Gardner though, the characters are all coloured by their various philosophical, and indeed theological, points of view. One of the central strands of the book is Gardner's journey of faith, from a Christian upbringing, through a variously fervent and disenchanted adolescence, to his position of "philosophical theism", a belief in a god, but not one directly involved in the world, or conforming to the deity of any organised religion.

Gardner explains how his career started off in journalism and writing. His passion for literature and poetry is another central theme of the book, which contains several extracts of his favourite verse. He is unashamed of his appreciation of science fiction and crime novels, genres not always lauded by literary critics, and boasts a simple taste in poetry and art, with scathing criticism for that which is inaccessibly abstract. The reader of Undiluted Hocus-Pocus who, like me, was unaware of Gardner's non-mathematical writing, will find in Perci Diaconis' preface a very helpful account of Gardner's novels, short stories and articles on philosophy and literature. Much of his fiction, it is revealed, has an autobiographical aspect to it, perhaps an indication of how he felt the wonders and eccentricities of the real world supplied enough enchantment to eclipse that of anything purely fabricated, the magic of our world being the Undiluted Hocus-Pocus of the title. This point of view he makes very explicit with respect to what he refers to as "pseudoscience", against which he aimed much of his writing, and in which he succeeded in uncovering a number of false claims.

The title also refers, more prosaically, to Gardner's significant involvement in magic. Although not a regular performer, he was known and respected by some of the most prominent magical performers of his time. Magic tricks with a mathematical slant regularly made it into Mathematical Games, as could anything which tickled his enthusiasm for conundrum and paradox. His sense of humour is also well-embedded in the pages of the book, with not a small number of amusing episodes and practical jokes of his own devising.

A reader hoping for mathematical puzzles and games would be disappointed — these can be found aplenty in Gardner's other works — for this is, as it says, an autobiography, a transparent and readable account of the character behind the enthusiastic expositions. Some may be surprised at the emphasis laid on the philosophical and religious beliefs of the book's characters and the context may mean that the odd cultural reference needs clarification for anyone not so familiar with American twentieth century history. However, both of these aspects are vital to Gardner's life as he tells it; his delight in mathematics is but part of his delight in the world. It's a sentiment he echoes from the writer G.K. Chesterton, perhaps surprisingly one of the most referenced authors in the book. This delight is grounded in a solidity of rational enquiry, which explains the importance he attaches to his intellectual environment. Perhaps the highest praise one can give is that, even if one disagrees with his ultimate conclusions, one feels enriched by his discussions and above all by his openness to ideas which, as he admits, allowed him to learn mathematics in the course of his writing for Scientific American. Although it is these writings by which I will always think of Gardner's influence on my own intellectual development, I am grateful to have seen the broader picture of the man's thought from which they arose.

Some of Gardner's books, and books inspired by him, have been reviewed on Plus:

Alexander Shannon has just completed a PhD in pure mathematics at Cambridge, where he studied at Christ's College, and has been a teaching associate at St. John's College.